Clarification of the holy name ‘Ali’: Ali means very high and better. This also implies that its height and goodness are ineffable.

He was Ali AlaihisSalam which means his altitude and goodness was ineffable. Just think what a great height his knowledge and wisdom must be. What a great was his spiritual knowledge! His divine faith had unique depth and strength. The implication of what he said was that he had such great faith in the divine commandments that there was no room for any increase in it. It had reached the highest level possible. My knowledge is too limited to describe his treasure of knowledge and profound faith in the divine commandments!

Now, see this also:
What great spiritual indications were there in the tradition of his progeny! Was there anyone else whose children were at this height?

Had anyone children like Hazrat Hasan AlahisSalam and Hazrat Hussain AlahisSalam to who were the very part of Huzur ﷺ existence and the leaders of the true path of heaven?

Had anyone such a noble lineage of children among whom, from the very beginning till the Day of Judgement, there was borne Auliya Allah, nay, the Imams of Auliya Allah? Is it not a matter of hard the fact that right from Hazrat Imam Hasan AlahisSalam and Hazrat Imam Hussain AlahisSalam till the day of Hazrat Imam Mehdi AlahisSalam which is very near to the Day of Judgement, the importance of Huzur ﷺ and his holy children was maintained and would be maintained in its real position? Till today, only these noble people have been leading human society towards the Truth. And their leadership will remain so, till the time of Hazrat Mehdi

Now, let us concentrate on this also;

The traditions of Auliya Allah that are continued till day are at the recordbreaking height of divine knowledge, truth, human service and noble virtues.

Islam has been spread over the world through the different Sufi traditions like Qadari, Chishti, Sohravardi, Sha’azli, Rifa’ai, Medini, Nakshabandi and such others. Crores of people accepted Islam; many people repented for the lies and their misbehaviour of the past and became real devotees and followers of the true path.

Various aspects of his unique height can be seen from the fact that during his youth, Huzur ﷺ made him sit on his holy shoulder. This event took place during the episode of Meccan Victory. Besides, during the stay at Mecca also he was made to sit on the pious shoulders so that he would remove the idol of Hubal from the roof of Holy Ka’aba. Allahu Akbar!! Hazrat Ali AlaihisSalam, riding on the pious shoulder!!! The Pious shoulder is many times more dignified than Arsh-e-A’azam. On the basis of Musnad-eAhmad, it has been written in Sifat-us-Safva that Hazrat Ali AlaihisSalam said, “Rasul-e-Khuda ﷺ and I reached to Holy Ka’aba. He rode on my shoulder but came down because I was too weak for that holy load. He asked me to ride on his shoulder. In this way, I climbed on the roof of Holy Ka’aba. There was installed a copper idol. I uprooted it from all four sides. Then, according to his command, I dashed it on the ground. It was broken into minute pieces.” He further adds, “When I was on the holy shoulder, I felt I could touch the horizons of the sky, had I wished so.”

From the above description, it can be imagined what a great level of
virtuous and spiritual personality Hazrat Ali AlaihisSalam is! If all the qualities and virtues of his holy character are put together, it definitely can make a voluminous book with rich knowledge. To describe all these unique attributes, it is enough to say that he is ‘Ali’, for; this name itself implies all the above adjectives. The title ‘Ali’ is enough to indicate all the virtues he had. 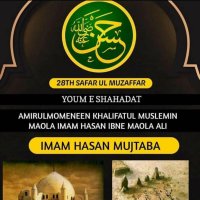