During the Islamic Golden Age, from the 8th century to the 13th century, the Abbasid Caliphate established one of the largest empires in history. This empire had contact with different cultures around the world, such as the Indians and Chinese in the east, and the Byzantines in the west, which led to the establishment of trade networks between Asia, Africa and Europe. But did you know that there might have been some contact between the Islamic world and the Vikings? Information about their relationship has been found in Arabic written sources and through the discovery of Arabic artefacts in Scandinavia.

The Moorish poet and diplomate al-Gazal is one of the few Arabs who gave a description of what must be nowadays Scandinavia. The fourth Emir of Cordoba, Abd al-Rahman II, sent al-Gazal to the king of the ‘Majus’. ‘Majus’ is another word for fireworshipers and in this instance the Vikings. Even though it is not clear why he was sent there, al-Gazal reports about an island or peninsula which might be the court of King Horik I, the King of the Danes.

Al-Tartushi has also reported about the Vikings around 970. In one of his accounts about his travels he describes “Schleswig”, i.e. Hedeby, an important Viking Age trading settlement. He talks about the people and their town: “Schleswig is a very large town situated at the Ocean. Within there are sources of fresh water. The people there adore Sirius, except for few, who are Christian. They have a church there.”

The Arabic or oriental artifacts found in Scandinavia are very diverse. Bronze vessels, Cufic coins, costumes and costume accessories, as well as glass vessels, beads, balances and weights found mostly in Sweden are proof of contact with the Arab world. But the most important physical evidence of contact between the Vikings and the Islamic world is the ring found in a grave of a woman near Birka. The ring is made of silver alloy and colored glass with an inscription in Cufic Arabic. The inscription is translated as “for/to Allah”. Even though the woman in the grave was wearing traditional Scandinavian clothing, it is not possible to identify her ethnicity or religion.

It is surely not the question if there was interaction between the Islamic World and the Vikings, it is just not clear if their relationship was purely for trade or if some of them converted to Islam. However, this is another proof of how huge and impressive the Abassid Caliphate must have been. 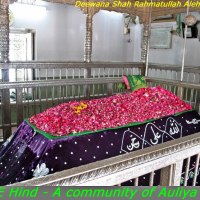