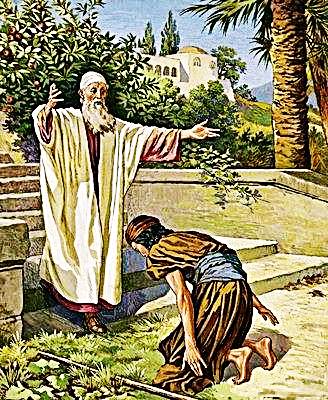 A man who was living in comfortable enough circumstances went one day to see a certain sage, reputed to have all knowledge. He said to him:
‘Great Sage, I have no material problems, and yet I am always unsettled. For years I have tried to be happy, to find an answer to my inner thoughts, to come to terms with the world. Please advise me as to how I can be cured of this malaise.

“My friend, what is hidden to some is apparent to others. Again, what is apparent to some is hidden to others. I have the answer to your ailment, though it is no ordinary medication. You must set out on your travels, seeking the happiest man in the world. As soon as you find him, you must ask him for his shirt, and put it on”
This seeker thereupon restlessly started looking for happy men. One after another he found few and questioned them. Again and again they said: ‘Yes, I am happy, but there is one happier than me’.
After travelling through one country after another for many, many days, he found the wood in which everyone said lived the happiest man in the world.
He heard the sound of laughter coming from among the trees, and quickened his step until he came upon a man sitting in a glade.

‘Are you the happiest man in the world, as people say?’ he asked. ‘Certainly I am,’ said the other man.

‘My name is so-and-so, my condition is such-and-such, and my remedy, ordered by the greatest sage, is to wear your shirt. Please give it to me;

I will give you anything I have in exchange.’

‘Are you unhinged, that you laugh at sch a serious request?* ‘Perhaps said the happiest man, ‘but if you had only taken the trouble to look, you would have seen that I do not possess a shirt* ‘What, then am I to do now?*

‘You will now be cured. Striving for something unattainable provides the exercise to achieve that which is needed: as when a man gathers all his strength to jump across a stream as if it were far wider than it is. He gets across the stream.*

The happiest man in the world then took off the turban whose end had concealed his face. The restless man saw that he was none other than the great sage who had originally advised him.

‘But why did you not tell me all this years ago, when I came to see you?’ the man asked in puzzlement.

‘Because you were not ready then to understand. You needed certain experiences, and they had to be given to you in a manner which would ensure that you went through them.