Ramadan is the ninth month in the Islamic calendar. It is a time for Muslims to submit themselves further to Almighty Allah whole-heartedly by way of fasting and worship. It is ultimately the month of divine guidance and mercy. The Arabic term ramadan literally means heat & dryness, which could be attributed to the struggle of fasting or sawm. Sawm of Ramadan was first prescribed in the second year of hijri. 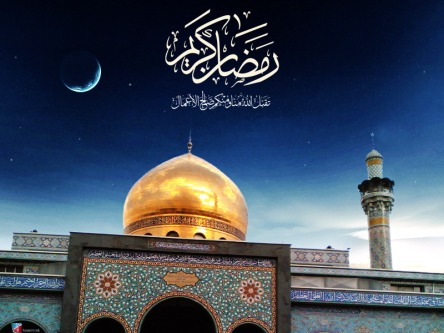 Ramadan is also the month wherein the first revelation or wahi of the Qur’an was sent down to the Beloved Messenger of Allahﷺ, thus assigning the duty of Prophethood to him so the truth of la ilaha illallah, ‘there is no God but Allah’, could be established.

The first verse to have been revealed is: “Read, in the name of your Lord who created.” [Qur’an 96:1] It is interesting to note how the first word revealed of the Holy Qur’an was ‘Iqra’ meaning, ‘Read’. In this is a command for the people to read, to seek, to obtain knowledge. In this word alone is a great command of faith, and the verses following it confirm the guidance of Allah upon mankind:

“Read, in the name of your Lord, Who created; Created man, out of a clot of congealed blood: Read, and your Lord is Most Bountiful, He Who taught you to write, Taught man that which he knew not.”[Qur’an 96:1-5]

In this blessed month also comes that night of excellence i.e. Laylat al Qadr, or the Night of Power, which is the actual night when the firsr wahi was sent down to the Messenger of Allah whilst he meditated in the cave of Hira.

Allah says: “Indeed, We sent the Qur’an down during the Night of Decree.” [Qur’an 97:1]
The significance of this night is so immense that it excels in virtue even a thousand months. Allah Most High says:

This is part of the spiritual treasures of the blessed month of Ramadan. The gates of Allah’s Mercy are opened to the believers in a way unlike any other time of year. Allah’s love for His servants is so apparent in Ramadan that goodness is merited in abundance; with the duration of the believer’s fast, with the beginning of the fast (suhoor), with the breaking of the fast (iftaar), and even in the breath of the fasting believer. Anyone who ponders upon the love for Allah towards His believing servants should reflect upon the manifestations of this love during Ramadan.

The Messenger of Allahﷺ said, “By Him in Whose Hands my soul is, the smell emitting from the mouth of a fasting person is better in the sight of Allah than the smell of musk. (Allah says about the fasting person): He has left his food, drink and desires for My sake. The fast is for Me. So I will reward (the fasting person) for it and the reward of good deeds is multiplied ten times.” [Muslim]

Ramadan is ultimately a time for reflection, forgiveness and seeking Allah’s Pleasure. It is a time to clear the heart of the distractions and weaknesses which have accumulated over the year, and renew the strength of the believer’s faith. Ramadan also brings communities together in a truly loving and harmonious way, strengthening the brotherhood of the Muslim Ummah. It is the time of year when every masjid is full, and every pure heart is quenching its thirst to please Allah. The believers share with each other in not just food and gifts, but in faith, in love and in good-hearted company.

The aspect of self-restraint during Ramadan is not just from food and drink. Sayyidina Abu Hurayra (May Allah be pleased with him) reports that the Beloved Messenger of Allah, may Allah’s peace and blessings be upon him, said: “Fasting is a shield (or a screen/shelter). So the person observing fasting should avoid sexual relation with his wife and should not behave foolishly and impudently, and if somebody fights with him or abuses him, he should tell him twice, ‘I am fasting (Arabic: inni sa’im, inni sa’im).’” [Muslim]

Ramadan is a time for, as the above hadith indicates, sincere striving towards goodness and away from wrongdoing. Sawm or fasting screens us from ills, as it increases our awareness of Allah and inclines us towards only doing that which is pleasing to Him. This is why we are advised to react calmly to one who provokes us especially when we are fasting, by saying: “I am fasting.” This reminder is first and foremost for ourselves when we are being provoked into anger, as a way to restrain our temper and keep our fasting pure from evil.

A catalyst for personal development and the strengthening of community ties, Ramadan is also a huge asset for the believer striving for both external and internal purity. The act of sawm, packed with great spiritual virtue, is also a great medical aid which allows the body to detox and cleanse itself of excess and impurity. The 13th century Islamic scholar and sufi, Mawlana Jalal uddin Rumi (Alaihi Rahma) said, “Fasting is the first principle of medicine.”

Sawm also allows us to empathise with the struggle and difficulties of our impoverished brothers and sisters around the world, many of whom barely manage a meal a day due to circumstances. During Ramadan, many of us fast and look forward to a lavish iftaar yet the same cannot be said for those in deprived circumstances who cannot even break their fast at all. Sawm addresses us with the harsh reality of those less fortunate than us, causing us to humble ourselves and reflect upon how utterly dependant we are upon the generosity of Allah towards us. It opens our eyes to the truth of suffering and poverty which we are otherwise so oblivious to, commanding us to undergo a small share of this struggle first-hand. Through it, we may be humble before our Creator, and through it, we may be grateful to Him for our sustenance.

Due to the generosity of our Creator, this struggle does not go unrewarded. His kindness upon the fasting believer extends, as mentioned above, to meriting even the breath of the one observing sawm. The Messenger of Allah ﷺ said, “By Him in Whose Hands my soul is, the smell emitting from the mouth of a fasting person is better in the sight of Allah than the smell of musk.” [Muslim]

Sayyidina Abu Hurairah (May Allah be pleased with him) reports that the Beloved Messenger of Allah, may Allah’s peace and blessings be upon him, also said: “When there comes the month of Ramadan, the gates of Mercy are opened, and the gates of Hell are locked and the devils are chained.” [Muslim]

The hadith above elaborates further on the other favors bestowed upon us by our Lord in the month of Ramadan, mainly:

“The gates of Mercy are opened…”: indicates that, for those seeking forgiveness and mercy from Allah, is the opportunity to ask for it and to strive towards it so that they may be blessed with it through the open gates. Therefore, mercy and forgiveness is granted to those in search of it.

However this point often raises a curious question; if the devils are chained, why is evil still committed during this holy month? This is easily explained; those who have acquired the characteristics and ways of evil are not chained themselves. The ego or nafs is still present within each person, so the evil of it is still present. This is the battle which remains for each believer, the only battle which he must fight during the auspicious month. This struggle is completely within oneself. The devils may be locked up but the character and the ways of the people are still present with them.

This month should be spent in sincere effort to better ourselves, abandon bad habits and to improve our characters in accordance with the sunnah of the Prophet of Mercy, may Allah’s peace and blessings be upon him. True, this striving is not just for Ramadan, yet Ramadan is a perfect opportunity with which Allah has favoured His servants so that they may use it as a means to strengthen their faith further and turn their lives completely towards His Pleasure. It is up to us, as individuals, to accept this Divine Gift.