Abū l-Ḥasan ‘Alī ibn Abī l-Rijāl al-Shaybani[1] (Arabic: أبو الحسن علي ابن أبي الرجال‎) (commonly known as Haly, Hali, Albohazen Haly filii Abenragel or Haly Abenragel, from ibn Rijal) was an Arab[2] astrologer of the late 10th and early 11th century, best known for his Kitāb al-bāri’ fī aḥkām an-nujūm.[3] He was a court astrologer to the Tunisian prince al-Mu’izz ibn Bâdis in the first half of the 11th century. Haly died after 1037 in Kairouan in what is now Tunisia.

His Kitāb al-bāri’ fī aḥkām an-nujūm was translated by Yehudā ben Moshe into Old Castilian for Alfonso X of Castile in 1254 under the title El libro conplido en los iudizios de las estrellas (“The complete book on the judgment of the stars”). The only surviving manuscript of the Old Castilian translation is MS 3605 at the National Library in Madrid, which however only contains 5 of the 8 books of the complete Old Castilian translation.[3] An edition created in 1523, created in Venice and presented in Latin, is held in the Qatar National Library.[4]

In 1485 at Venice a complete copy of the Old Castilian manuscript was translated into Latin and published by Erhard Ratdolt as Praeclarissimus liber completus in judiciis astrorum (“The very famous complete book on the judgment of the stars”). This printing (and later Latin versions) is commonly known as De iudiciis astrorum (or De judiciis astrorum).[3] 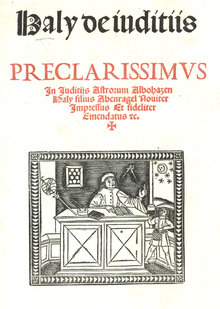 Complete Book on the Judgment of the Stars from 1523