Fatima al-Nisaburiya also known as Fatima of Nishapur or Fatima Nishapuri was a ninth century Sufi shaykha and saint. She was the daughter of one of the nobles of Balkh and is noted for abandoning her life of luxury and willingly choosing the Sufi path. She became respected as a master of esoteric interpretation of the Quran and tasawwuf (Sufism).

She was married to a renowned Sufi of her time, Hazrat Abu Hamid Ahmad bin Khadrawayh (also spelt Khidruya; d.854). She was also acquainted with great Sufi saints including Hazrat Bayazid Bastami and Hazrat Abu Hafs al-Haddad, and is also credited for being the teacher of the great Hazrat Dhul-Nun al-Misri. 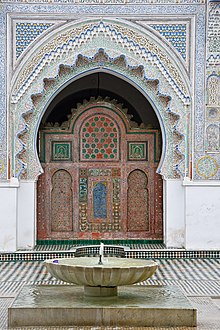 Life
Hazrat Fatima was a model of the Sufi way. Although she was at one time quite wealthy, she spent all her riches on the poor (Fuqara). During her life time, she spent most of her life traveling between Mecca and Jerusalem.

She offered herself in marriage to Hazrat Ahmad bin Khidruya, asking him to request her hand in marriage from her father. After initially refusing, he later sent her an envoy with a marriage proposal addressed to her father, who considered their engagement a Godsend. Renouncing all connection with the world, the couple lived together in seclusion. She is known to have guided her husband in religious and practical matters.

“Fatima, how should we entertain Yahya when he comes?” Ahmad asked.
She replied, “Obtain this many oxen and sheep, and prepare this quantity of sweet herbs, condiments, candles, and perfumes. Twenty donkeys should also be killed.” Hazrat Ahmad said, “But what is the sense of killing donkeys?”
Hazrat Fatima then explained, “When a nobleman comes to dine, even the dogs of the neighbourhood must get a share of the feast.””

Opinions of Great Sufis About Her
Hazrat Fatima was known for her meetings with the eminent Sufi masters of her time in circles of study and discussions on matters of worship and Sufi knowledge.

“
In my life I only encountered one real man and one real woman — Fatema of Nishapur. There was no station (on the way) about which I told her that she had not already undergone.
”
He also said:

“
One who struggles to practice the purity of Sufism should act with a magnanimous aspiration and demeanour like that of Fatima, wife of Ahmad Khidruya. Whoever would wish to see a true man disguised as a woman, let him see Fatima.
”
After living in seclusion for a period of time, Hazrat Fatima accompanied her husband when he went to visit Hazrat Bayazid. When they reached him, Hazrat Fatima removed her veil and conversed with Hazrat Bayazid fearlessly. This looked very odd to Hazrat Ahmad and he asked her why she had behaved disrespectfully in front of the Sheikh. She replied:

“
Because you are my natural spouse, but he is my religious consort; through you I come to my desire, but through him to God. The proof is that he has no need of my society, whereas to you it is necessary.
”
Hazrat Fatima continued to treat Hazrat Bayazid as such until one day he observed that her hand was stained with henna and asked her why. She answered: “O Bayazid, so long as you did not see my hand and the henna I was at my ease with you, but now that your eye has fallen on me our companionship is unlawful.”

Hazrat Fatima and her husband then returned and settled in Nishapur.

A master once asked Hazrat Dhul-Nun, “Who, in your opinion, is the highest among the Sufis?” He replied:

“
A lady in Mecca, called Fatima Nishapuri, whose discourse displayed a profound apprehension of the inner meanings of the Quran which were astounding.
”
Once in Jerusalem, Hazrat Dhul-Nun requested that Hazrat Fatima give him some words of counsel. She exhorted him, “In all your actions, watch that you act with sincerity and in opposition to your lower soul (nafs).”

Character
Her character portrait of Hazrat Fatima shows her to be strong-willed, independent, self-confident, and very much involved in the cultural life of Sufi elites at the time. Historical narration about her seems to be impressed by these qualities and mystical capabilities.

Demise
Hazrat Fatima passed away while performing the Umrah pilgrimage in 838.

Sayings & Quotes
When God ignores a person, he will wonder aimlessly in every city square and will prattle constantly with every tongue. When God does not ignore a person, he silences him except for the truth and compels him to hold Him in reverence and sincerity.

Whoever doesn’t have God in his consciousness, is erring and in delusion, whatever language he speaks, whatever company he keeps. Yet, whoever holds God’s company never speaks except with sincerity and assiduously adheres to a humble reserve and earnest devotion in his conduct.

In this day and age, a man of true spiritual honesty and piety is buffeted by an ocean whose waves distress him. His entreaty to God is to liberate him, to grant him salvation from its waves.

One who works for the vision of the Truth is a Gnostic (Arif) and whoever’s conduct is based on the fact that God is constantly observing him, is a devotee.

God, through an infinite variety of subtle graces and goodness, invited people to Himself, but they did not respond to His call, so He afflicted them with diverse calamities, that by means of this torment they might return to Him, for He loves His creation.

It is far easier to overcome one’s desires than to endure being abased by seeking after them.

It is related that a woman from Balkh once visited Fatemah and declared, “I wish to attain nearness to God through serving you.” Hazrat Fatima responded, “Why not seek proximity to me through serving God?”