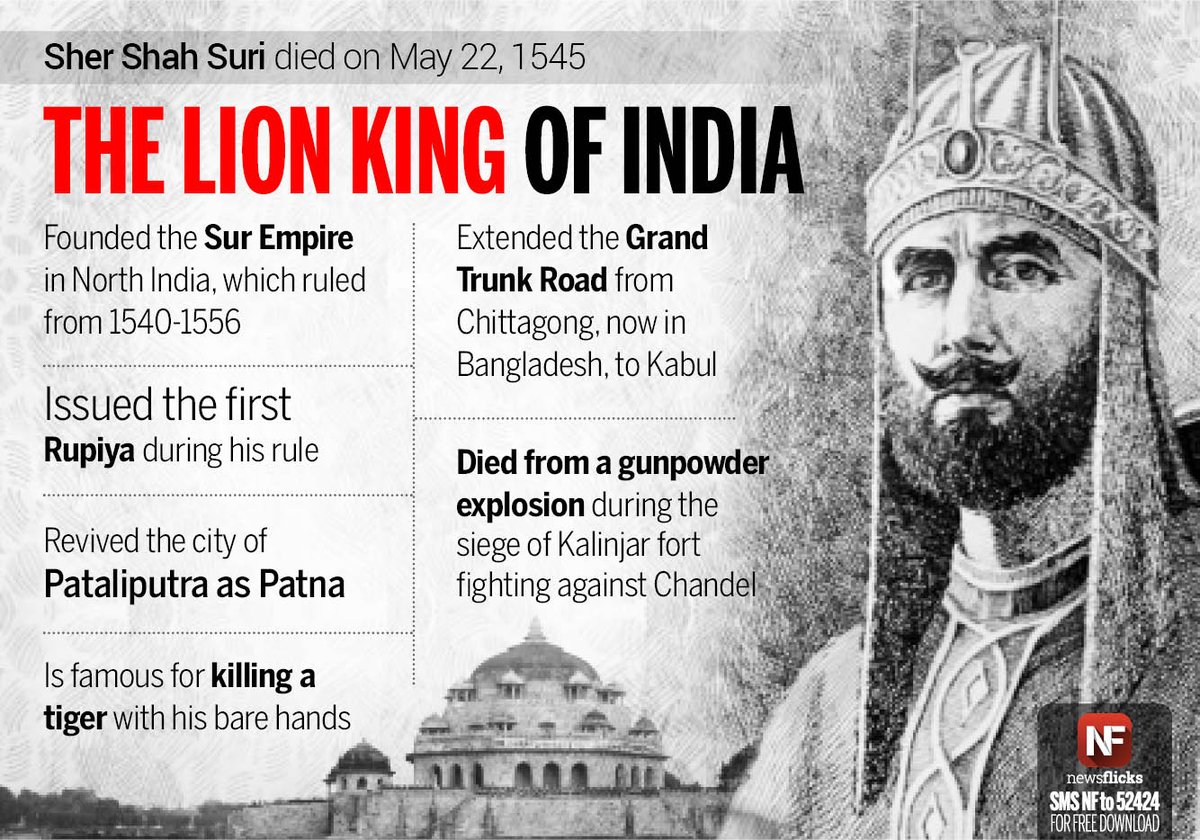 Sher Khan (شیرخان) (known as Sher Shah Suri 1486 -1545شیر شاہ سوری ( was born in an ancient city Sasaram, Bihar (بہار ) His original birth name was Farid-ud-din Abul Muzaffar (فریدالدین ابولمظفّر) but mostly called by the simple name as Farid (فرید) son of Hassan Khan Suri (حسن خان سوری). According to his teacher, as a child, Farid Khan (فرید خان) was exceptionally bright, he set himself to serious study, he acquired good command over the Arabic and Persian languages. Because of his abilities, he was soon appointed by his father to manage the family Jagir (property – (جاگیر. But because of his stepmother, he left his father’s Jagir. He enlists as a soldier in the service of Jamal Khan, the governor of Jahanpur (جہانپور). Later, he had known as Sher Khan after he killed a full-sized tiger (sher شیر) single-handedly.Sher Khan (شیرخان) belonged to the Suri ethnic Pashtun tribe (known as Afghan – افغان in historical Persian sources) his parents were Afghan nobility who descended from a Pashtun nobleman adventurer recruited much earlier by Sultan Bahlul Lodi of Delhi during his long contest with the Sharqi Sultans of Jahanpur (جہانپور).Military Campaign

Seeing the weaknesses in the Mughal rule and military organization, Sher Shah took advantage of the problems faced by Humayun. Eventually he managed to overthrow the Mughal rulers. He defeated Humayun (ہمایوں) in 1539 and became ruler of the Mughal Empire. This made him a shah, so his name changed to Sher Shah.

Sher Shah conquered a large portion of sub-continent, although his reign barely spanned five years, it’s a landmark in the history of the Sub-continent as a founder of the Suri Dynasty.

Sher Shah (شیرشاہ) “The Lion King” ran an efficient, but somewhat tight administration. With his deep knowledge and practical experience, he made many brilliant additions and improvements to the existent system. Sher Shah was a capable military and civilian administrator. He set up reforms in various areas. The empire was divided into 47 provinces called sarkars (سرکار), and then each was subdivided into several smaller districts called Parganas (پراگنا) صدرمقام) capitalized). Each Pargana had its own group of officers called Shiqdar-i-Shiqdaram (شقدار – شقدارام) and a second group called Munsif-i-Munsifan (منصف منصفان). Sher Shah (شیرشاہ) transferred these officers around every two or three years to prevent any “undue influence” of officers in one place. He also wasn’t leanant when it came to crime. He even punished his relatives (but only if they were found guilty in the courts). In order to stay in power, Sher Shah (شیرشاہ) appointed several spies.

Sher Shah (شیرشاہ) rose from the rank of private to be emperor, reorganized the administration efficiently and the army and tax collections, built roads and Travellers’ inns, rest houses (sarais سراۓ) and wells (کنویں), improved the jurisdiction, founded refuges and hospitals, established free kitchens (لنگر) and organized a mail services and the police.

Sher Shah (شیرشاہ) was a visionary ruler and introduced many military and civil reforms. The system of tri-metalism which came to characterize Mughal coinage was largely the creation of Sher Shah Suri. He minted a coin of silver which was termed the “Rupiya(روپیہ) ” in 1540 – 1545 CE, that was the first Rupee released, it weighed 178 grains and was the precursor of the modern rupee. The same name is still used for the national currency in Pakistan, India, Nepal, Sri Lanka, Indonesia, Mauritius, Maldives, and Seychelles among other countries. Gold coins called the Mohur (مہر) weighing 169 grains and copper coins called Dam (دام) were also minted by his government.

Mirza Aziz Koka, son of Ataga Khan, and probably Akbar’s closest friend and one the most important mansabdar’s (منصبدار) of the Mughal Empire, wrote this to Emperor Jahangir in one of his personal letters to him.

“Especially Sher Khan was not an angel (malaik ملائک / فرشتہ) but a king (malik حاکم)”. In six years he gave such stability to the structure (of the kingdom) that foundation still survives. He had made Sub-continent flourishing in such a way that the king of Persia (فارس) and Turan (توران) appreciate it, and has a desire to look at it”.

Akbar later built on these reforms and extended them further. Many of these reforms pertained to the army, but the principal reforms for which he is remembered are those connected with revenue administration. Numerous civil works were carried out during his short reign. Akbar followed his administrative manual (zawabit انتظامی ضوابط ) for fifty years and did not discontinue them.

Death and succession
Sher Shah Suri (شیرشاہ سوری) died of a blast during siege of Kalinjar fort on 22 May, 1545. Sher Shah (شیرشاہ) was the last Delhi Sultan to offer serious resistance to the Mughals on their advance to the south, and his death in during the siege of Kalinjar (Bundelkhand) in 1545, cleared the path to the return of Mughal emperor Humayun.

Sher Shah Suri (شیرشاہ سوری) was succeeded by his son, Jalal Khan (جلال خان) who took the title of Islam Shah Suri (اسلام شاہ سوری), and his imposing mausoleum, the Sher Shah Suri Tomb (122 ft high) stands in the middle of an artificial lake at Sasaram, a town that stands on the Grand Trunk Road, his lasting legacy.

Rohtas Fort’s magnificent Kabuli Gate.
Apart from the Grand Trunk Roadthen known as Sarak-e-Azam (شاہراہ اعظم /سڑک اعظم) (“great road”), which stretches across the breadth of subcontinent from Sonargaon in Bangaldesh toPeshwar in Pakistan, he built monuments many of which are extinct today, including, Rohtas Fort, now a UNESCO World Heritage Site in Pakistan, many structures in the Rohtasgarh Fort in Bihar, Sher Shah Suri Masjid, in Patna, built in 1540-1545 to commemorate his reign.
Qila-i-Kuhna mosque, built by Sher Shah in 1541, at Purana Qila, Delhi, a citadel Humayun started in 1533, and later extended by him, along with the construction of Sher Mandal, an octagonal building inside the Purana Qila, Delhi complex, which later served as the library of Humayun.

Sher Shah Suri’s شیر شاہ سوری empire (green) at its peak Sher Shah (شیرشاہ) ruled for a short period of five years, at his death in 1545, he not only consolidated his power but also brought about important reforms. He was a practical and farsighted ruler who was way ahead of his contemporaries. He is remembered in history for the numerous reforms that he undertook to strengthen the government. He place in history rests not on his military exploits alone, but on the exemplary efficiency of his rule, the many far-reaching improvements that he effected in all spheres of government, and the splendid measures that he instituted for the good of the general public.Sher Shah Suri- شیر شاہ سوری -a man of surpassing personal excellence, a great and exemplary ruler and the greatest leader ever produced by the Afghans. Sher Shah left behind an empire stretching from the Indus to the Bay of Bengal. However, he was in truth the greatest ruler that sat upon the throne of Delhi