Spot where Prophet Sulaiman (upon him be peace) died

This building, located at the rear end of the Aqsa platform is believed to be the place where the Prophet Sulaiman (upon him be peace) passed away while leaning on his staff. It presently functions as a girls school.

THE PROPHET SULAIMAN (peace be upon him)

The Prophet Sulaiman (Solomon) was the youngest son of the Prophet Dawud (peace be upon him).  He was born at Jerusalem.  The name of his mother was Saba.  As he was a talented fellow with versatile gifts, his father made him his heir.  After the death of Prophet Dawud (peace be upon him) he ascended the throne of Judia on account of his sagacity, power of judgement, right understanding and spiritual insight.  The Holy Qur’an says: “And We verily gave knowledge to Dawud and Sulaiman and they said: praise be to Allah Who has preferred us above many of his believing servants”.  (27: I5)

The Prophet Sulaiman Makes Sound Decisions:
The Prophet Sulaiman (peace be upon him) was endowed with the quality of giving sound decision in complicated cases.  Once a dispute arose between two persons.  They were present before the Prophet Dawud (peace be upon him).  One of them said: Sir, the sheep of that person have trampled over my crops.  They have grazed and caused me a considerable loss.  It must be compensated by the owner.  The shepherd was very poor.  He had nothing except sheep and the damage done to the crops exceeded the price of the sheep.  The Prophet Dawud (peace be upon him) ordered the defaulter to give his sheep to the owner of the land as reparation.  Sulaiman, the teen-aged child was listening to the judgement of his father.  He, respectfully, spoke out: Dear father, undoubtedly, your decision is correct but it will be handed over to more appropriate if all the sheep are the plaintiff for the utilisation of their milk and wool only.  The respondent should be directed to render services to the owner of the field until the condition of the damaged fields restores to the normal position.  When it is done, sheep must be given back to the shepherd.  The Prophet Dawud (peace be upon him) appreciated this novel way of awarding justice and the Holy Qur’an speaks very highly of him:

“And Dawud (David) and Sulaiman (Solomon)  when they gave judgement concerning the field, when people’s sheep had strayed and browsed therein by night; and We were witnesses to their judgement.  And We made Sulaiman to understand (the case); and unto each of them We gave judgement and knowledge.” (21: 78, 79)

Prevalence over Wind:
The Prophet Sulaiman (peace be upon him) inherited many virtues from his illustrious father.  He was endowed with special gifts.  Wind was made subservient to him and he could easily perform long journey in the twinkling of an eye.  The Holy Qur’an affirms:

“So We subjected the wind to his power, setting fair by his command withersoever he intended” (38:36)

“And unto Sulaiman We subdued the wind in its raging.  It flows by his order towards the land which We had blessed And of every thing We are aware.” (21:81)

The Prophet Dawud Perceives the Speech of the Birds:
The Prophet Sulaiman peace be upon him) was gifted with the knowledge of understanding the speech of birds, animals and insects.  He was also capable to talk to them.  The Holy Qur’an testifies to it in the following Verses:

“He (Sulaiman) said: O’ People! We have been taught the language of the birds and have been given (abundance) of all things; this is indeed grace manifest (from Allah).”

Jinns are Subdued to Him:
He was also given the power over Jinns and Devils.  He utilized them in his service.   They carried out his orders ungrudgingly and were punished when they became refractory The Holy Qur’an affirms:

034.012 And to Solomon (We made) the Wind (obedient): Its early morning (stride)
was a month’s (journey), and its evening (stride) was a month’s (journey); and We
made a Font of molten brass to flow for him; and there were Jinns that worked in
front of him, by the leave of his Lord, and if any of them turned aside from our
command, We made him taste of the Penalty of the Blazing Fire.

034.013 They worked for him as he desired, (making) arches, images, basons as large
as reservoirs, and (cooking) cauldrons fixed (in their places): “Work ye, sons of
David, with thanks! but few of My servants are grateful!”

In another Verse the Holy Qur’an says: “And before Sulaiman were marshalled his hosts–of Jinns, and men and birds and they were all in order and ranks.” (21: 17)

It is stated that the Jinns were subjugated to the Prophet Sulaiman (peace be upon him) to help him in the construction of the Holy Temple – Baitul Muqaddas (Masjid Aqsa).

The Incident of the Queen of Saba:
The area which now comprises Yemen and is known as Saba was ruled by a queen.  It was a prosperous kingdom.  The queen enabled its people to attain a high degree of civilisation.  One day Hud informed the Prophet Sulaiman (peace be upon him) of the flourishing kingdom of Saba.  It said:

“The ruler of Saba is the queen upon whom, God has bestowed His unlimited favours.   Her throne is magnificent.  She is depraved.  The inhabitants of her kingdom worship the sun and the moon.  They do not make obeisance to Allah and refrain from thanking Him Who has created all these objects.” Sulaiman, the Prophet of Allah and the King wrote a letter and handed over to Hud to be conveyed to the queen of Saba.  He warned her not to be arrogant of her power.  He advised her to submit to God and abide by His Commandments.  The queen read this letter and was much puzzled.  As she was a prudent lady, she called her chiefs and sought their counsels.   Some proud chiefs suggested to fight tooth and nail against the Prophet Sulaiman (peace be upon him) whereas the others left the matter for her to decide.  The Holy Qur’an says:

”She said: O’ chiefs! Advise me in this affair for I never decide an affair until you are in my presence.  They said: We are endowed with strength and ale possessors of mighty powers  but the command is thine.  Therefore see what you will command.” (27:29-33)

The queen did not like to embroil her country into war because it would cause destruction.  She thought of a plan and arranged for precious gifts for the monarch.   She planned to germinate cordial relations and pacify her warlike subjects by using this device.  But wealth had no value for the Prophet Sulaiman (peace be upon him).   He was annoyed at the delivery of the presents.  He returned them with harsh words and said to the messenger:

“I do not hanker after wealth.  I, therefore, attach no importance to there Costly gifts.  I wish that the queen and his followers should submit to God and follow the true faith.  I shall invade your country if the queen does not come to me in submission.”

After some time the King marched with an army and passed through the Valley of Ants on his way to the kingdom of Saba.  In the Valley he overheard the conversation among the terrified ants who hurried towards their holes for fear of being crushed under the feet of the marching army.  The King was moved to pity and learnt the lesson to protect the life and honour of the humble creatures.  He thought that the queen and his people are just like humble ants.  They should not be trampled upon and killed to win Fame in the world.  An account of this incident is related in the following Verses:

“At length when they came to a valley of ants, one of the ants said: 0′ ants! Get into your holes lest Sulaiman and his hosts crush you without knowing it.   Thereupon he smiled at her speech and he said: 0′ my Lord! So order the that I may be grateful for Your favours which You have bestowed upon me and my father and that I may work the righteousness that will please Thee and admit me by Your grace into the ranks of Your righteous servants.” (27: 18, 19)

The King did not proceed further because he did not like the massacre which would result in case of clash between two armies.  His aim was to reform the queen and the inhabitants of Saba.  He desired to bring them to the right path.  He wished to save the depraved people from seduction.

When the queen got wind of an expected attack of the Prophet Sulaiman (peace be upon him) she proceeded towards him to patch up differences.  When the King came to know of her departure, he ordered a servant of Allah, who had the knowledge to bring the magnificent throne of the queen in the twinkling of an eye.  The command was obeyed immediately.  When the queen arrived at the court of Prophet Sulaiman (peace be upon him) after a long journey, she was asked to identify her throne.  She recognised the throne and said:

“I am already aware of your power and majesty.  I have come to you as your submissive servant.”

“So when she arrived she was asked: Is it your throne? She said: It was just like this and we were given the knowledge before it and we were already submissive and he diverted her from the worship of others besides Allah, for she was Sprung of a people that have no faith.” (7:4L, 43)

The queen was taken to the lofty palace.  Its floor was made of slabs of polished glass that deceived the eyes and looked like water.  The queen tucked up her shirt to pass through it.  She was reminded that that was not water.  She then realised that reality did not lay at the surface and it needed eyes to see.  According to the Holy Qur’an she said:

The queen of Saba felt penitence and accepted the religion of God.   The Prophet Sulaiman (peace be upon him) ruled for thirty years.  He died at the age of eighty-nine years.  After his death Rohoboam, his son became a king.   He led a luxurious life and yielded to pleasure seeking temptations.  The people revolted against him and soon the glorious chapter of the reign of Prophet Dawud’s family came to an end. 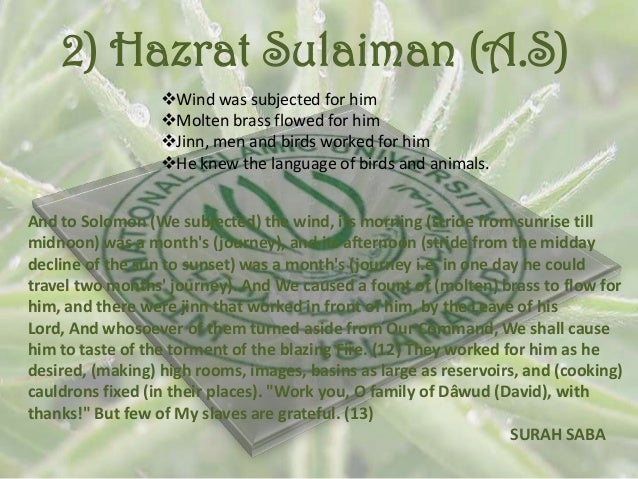