The historian and geographer, Abul Hasan Ali Ibn Hussain Ibn Ali Al Masudi (895-957 CE) was a scion of an age when Islamic scholarship had overcome the challenge of Greek rationalism, and having thrown off the yoke of deductive absurdity, found its own expression in the inductive empiricism of the Qur’an. The history of this challenge and the aftermath of ensuing battles has defined the intellectual landscape of Islam until modern times. 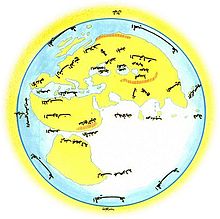 Al-Mas‘udi’s atlas of the world (reversed on the N–S axis to compare with modern geographical maps).

Al Masudi was a descendent of Abdullah Ibn Masud, a companion of Prophet  (pbuh). He was born and educated in Baghdad during the reign of Caliph Al Mu’tadid (892-904 CE). An understanding of the political, economic and intellectual milieu surrounding him is helpful in appreciating his time and his work. At the turn of the ninth century, the Islamic world extended from Spainto the borders of India, but it was like a giant banyan tree decaying from within. The Abbasid Caliphs in Baghdad had lost their hold on vast territories. The Aghlabids in Tripoli were independent all but in name. The Fatimids, after establishing themselves in North Africa, were advancing towards Egypt. Far away Spain enjoyed the zenith of  its power under Abdur Rahman III, who had declared his own claim to the Caliphate. Closer to home, the Shia Buyids ruled in Southern Iraq and for a while occupied Baghdad itself (945CE). The Sassanids had established themselves in Bokhara and competed with the Abbasids in establishing centers of learning and culture in their realm. The nomadic Turks, facing drought in their Central Asian homelands, were on the move, crossing Amu Darya in large numbers into Farghana and Northeastern Persia.

The breakup of centralized power in Baghdad fostered intense competition among the regional powers to attract scholars to their courts and establish centers of learning. Scholarship thrived. It was the age of intellectual giants. The physician Al Razi ( d.925), the commentator Abu Tabari (d. 923), the theologian al Ashari (d. 936), the Persian mystic Mansur al Hallaj (922) and the Sufi Shaikh al Farabi (d. 950) were all compatriots of Al Masudi. It was a period when empirical science as well as spiritual quests reached their heights and paved the way for Al Gazzali and Ibn Sina in the following century.

While political affairs in the great landmass of Afro-Eurasia were unsettled, the littoral states of the Indian Ocean enjoyed peace and prosperity. Trade and travel had forged commercial links between these peoples transcending the barriers of region, religion, race and ethnicity. Prosperous cities dotted the shores of East Africa, South Asia and the Western Pacific. Dar es Salaam, Shofala, Kilwa, Mobasa, Pemba Malindi, Mogadishu in East Africa; Aden, Hormuz, Basrah, Surat and Cochin in the Arabian Sea; Sri Lanka and Malacca in the Indian Ocean; Canton in the Western Pacific were thriving trade centers. The energy for this growth came from the zeal and drive of the Muslims who traveled throughout Asia and Africa searching for trading opportunities. Large colonies of Arabs and Persians grew up on distant shores which made it easier for restless globe trotters like Al Masudi to travel, trade, observe and learn.

Al Masudi was a young man of twenty when he traveled to Persia which was at the time a hotbed of Buyid political intrigue. Returning to Baghdad the following year, he proceeded to Mansura and Multan (today’s Pakistan). Mansura was the capital of the province of Sind which marked the limit of Islamic domains. Situated in the delta of the great river, it was a prosperous region that excited the imagination of many a youth. From Mansura, Al Masudi traveled to Surat in Gujarat. Here the young traveler had first hand contact with the Hindu civilization which had given the works of Aryabhatta to Islamic astronomy. Traveling further South, Al Masudi landed in Malabar on the Western coast of India, visited Sri Lanka and sailed from there to Sumatra in Indonesia and Malacca in modern Malaysia. Then as now, the Straits of Malacca were the conduit for ships from the Indian Ocean to the South China Sea. There was brisk trade between the eastern seaboard of India and Malacca. From here, Al Masudi moved north to Cantonin China. Although the city had been sacked in the anti-foreigner riots of 865CE,  the trading post had recovered some of its trade by the year 920 when Al Masudi visited it.

Retracing his course around the rim of the Indian Ocean, Al Masudi traveled South to the island of Madagaskar and the eastern seaboard of Africa. He describes Shofala as a city of gold and the cities of Africa as rich and prosperous. He returned to Basrah in 922 and wrote his first historical compendium Muruj-al-Zahab wa al-Ma-adin al-Jawahir (Meadows of Gold and Mines of Precious Stones). In this collection, he describes in fascinating detail the habitation, geography and ecology of the lands he had visited.

Later in his life, Al Masudi moved first to Damascus (Syria) and then to Fustrat (Cairo), Egypt. Here, he wrote his second volume Muruj al Zaman, in thirty volumes. In this masterpiece, he records the cultures, religious practices and customs of the peoples he had visited and makes observations on their civilizations. He was the first historian who based his writings on empirical observation and inductive science. As such, he was a precursor to the great historian Ibn Khaldun and the father of modern historiography. In 955 CE, he wrote Kitab al-Awsat, in which he lists chronologically the historical events from ancient times till the year 955 CE. This was the first scholarly effort to sort out historical events from myths, legends and hearsay. His last work, Kitab al-Tanbih wa al-Ishraf, written in the year of his death 947 CE, provides a summary of his earlier works.

Al Masudi is sometimes referred to as the Herodotus of the Arabs. This title does justice to neither savant. Herodotus, who preceded Al Masudi by more than a thousand years, was a first rank historian; however, his unverified assertions have sometimes earned him the title “the father of lies”. His great work “the histories” is a compendium of myths, tales, opinions and some facts. His travels to Babylon, Persia and Egypt to collect the material for his books are a subject of controversy and debate. Finally, Herodotus found an explanation for historical events in the whims of Greek gods. By contrast, Al Masudi’s observations have their grounding in geography, ethnography, ecology, anthropology and historical facts. He finds the principle of movement in history in the work of man and his environment, not in the supernatural. His travels to Persia, India, East Africa and China are seldom questioned. Al Masudi’s methodology was anchored in the inductive method which was adopted by the Muslims after their encounter, and their rejection, of the rational, deductive methodology of the Greeks. The empirical method belongs to the Muslims, just as the rational method belongs to the Greeks, and it was al Masudi, not Herodotus, who was the inventor of empirical historiography.

Al Masudi composed a map of the then known world which represented a significant advance upon earlier maps. It shows a large landmass Al Masudi identifies as unknown territory lying beyond “the ocean of darkness and fog”. The landmass suggests the contour of South America. Al Masudi writes in The Meadows of Gold and Quarries of Jewels that a Muslim sailor Ibn Aswad sailed through the ocean of darkness and fog in the year 889 CE and returned with treasures of gold and silver. The map and the description have led to the speculation that the Americas were known to the Arabs and the Africans.

Al Masudi was an accomplished geologist and mineralogist. He studied earthquakes and in one his treatises he analyzed the earthquake of 855 CE. He also propounded a theory of evolution from minerals to plants to animals to man. In this work he presages Charles Darwin by nine hundred years.

This great scholar, founder of the empirical method in the social and historical sciences, passed away in the year 957 CE.