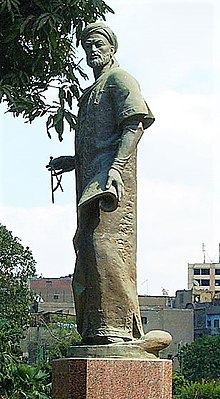 Abū al-ʿAbbās Aḥmad ibn Muḥammad ibn Kathīr al-Farghānī. (800/805-870) also known as Alfraganus in the West, was an astronomer in the Abbasid court in Baghdad, and one of the most famous astronomers in the 9th century. The lunar crater Alfraganus is named after him.

He was involved in the calculation of the diameter of the Earth by the measurement of the meridian arc length, together with a team of scientists under the patronage of the ʿAbbāsid caliph al-Ma’mūn in Baghdad. Later he moved to Cairo, where he composed a treatise on the astrolabe around 856. There he also supervised the construction of the large Nilometer on the island of al-Rawda (in Old Cairo) in the year 861. Some modern sources describe him as Arab[2][3] or Persian[4][5]

His textbook Kitāb fī Jawāmiʿ ʿIlm al-Nujūm (كتاب في جوامع علم النجوم A Compendium of the Science of the Stars) or Elements of astronomy on the celestial motions, written about 833, was a descriptive summary of Ptolemy’s Almagest, while using the findings and revised values of earlier Islamic astronomers.[6] It was translated into Latin in the 12th century and remained very popular in Europe until the time of Regiomontanus. Dante Alighieri’s knowledge of Ptolemaic astronomy, which is evident in his Divina Commedia as well as other works such as the Convivio, seems to have been drawn from his reading of Alfraganus.[7][8] In the 17th century the Dutch orientalist Jacob Golius published the Arabic text on the basis of a manuscript he had acquired in the Near East, with a new Latin translation and extensive notes.