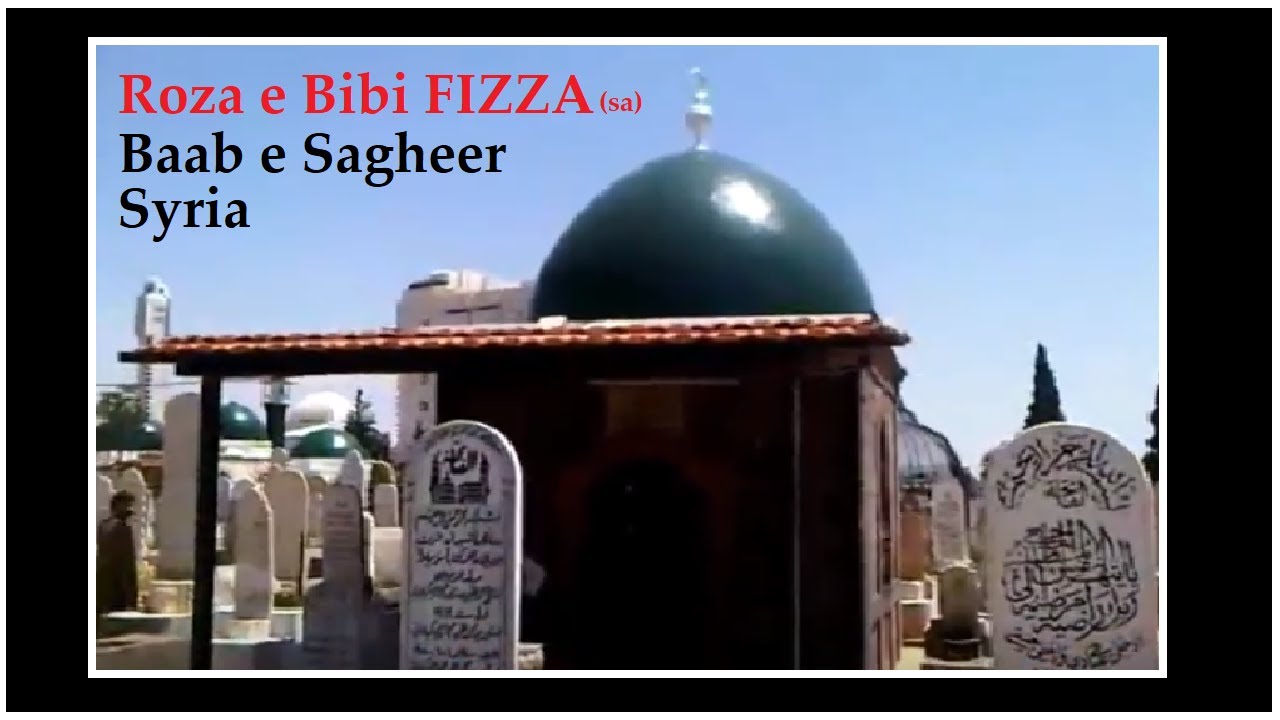 She was the daughter of a king of Ethiopia. She left her father and went to work as a maid of Janabe Fatema Zehra A.S. She was only 11 years of age when she came to serve Bibi Fatema A.S. It is believed that she knew how to make gold and she also knew the Holy Quran by heart. Once she invited the Ahlul Bayt for dinner and with her dua, the food was sent to her from Heaven by the order of Allah (SWT). After the death of Bibi Fatema A.S. she continued to stay with the Ahlul Bayt, even though she had sons who were very rich. Imam Hussein A.S. even took her to Kerbala. On every occasion in Kerbala, she was with Bibi Zainab A.S. Imam Hussein A.S. respected her very much. She died in Shaam and is buried there.

It is said that when Yazid was misbehaving in the Darbar of Shaam against the Ahlul Bayt A.S. Bibi Fizza A.S. stood in front of Bibi Zainab A.S. Yazid gave orders that Bibi Fizza should be whipped. Bibi Fizza came forward and gave a daring speech addressing the African slaves who were the bodyguards. She told them it was a shame on them that in their presence Yazid was ordering her to be whipped. The slaves were very much affected by her speech and they immediately turned towards Yazid and told him that if Bibi Fizza were whipped they would attack with their swords already drawn. Yazid ordered the slaves to stop.

Abdulláh Mubárak has related a very interesting dialogue between himself and Bibi Fizza.
He states, “I saw a woman passing through the desert who had fallen behind the caravan and asked her, “Who are you and where are you from?”
She replied:

I learned that she expected me to greet her and say “Assalámu `Alaykum” first, before any question. I did as she reminded, and then
enquired why she was in the desert. She answered:

And whomsoever Alláh guides, there is none to lead him astray! (az-Zumar, 39:37)

On hearing her reply, I asked her, Are you from mankind or from the jinn?” She replied:

O Children of Adam! be adorned at every time of prostration. (al-A`ráf,7: 31)

I asked her, “Where are you coming from?” She replied:

I asked her, “Where are you intending to go?” She said:

And (purely) for Alláh is incumbent upon mankind, the Pilgrimage of the House. (Áli Imrán, 3:97)

I asked her how many days she had been travelling. She told me:

And indeed We (Alláh) created the heavens and the earth and what is between them two, in six days. (Qáf, 50:38)

I asked her, “Do you feel hungry?” She replied:

I gave her food and asked her to hurry up to catch the caravan but she replied:

Alláh does not task any soul beyond its ability. (al-Baqaráh, 2:286)

I suggested that she sit on the camel behind me, but she said:

Had there been gods therein besides Alláh, there would have been disorder in both (the heavens and the earth). (al-Anbiya, 21:22)

On hearing this I realised that, because we were not husband and wife, it was unlawful for both of us to ride the camel.
So I got off and mounted her on it. When she sat on the camel, she said:

When we reached the caravan, I asked her, “Do you know anyone among them?” She called out in reply:

I began to call out these four names at which four youths came out of the caravan and ran towards Bibi Fizza. I asked
her who they were and she replied:

Wealth and children are the adornment of the world. (al-Kahf, 18:46)

I realised that they were her sons. The woman turned to the youth and said:

O my Father, employ him, verily the best of those who you can employ is the strong man and the trusted one. (al-Qasas, 28:26)

She thus made them understand that I had helped her. Then she told them:

And verily Alláh increases manifold to whosoever He wills. (al-Baqaráh, 2: 261)

The sons understood their mother’s hint and paid me well.

I enquired from the them as to who this noble lady was, and they replied, “She is our mother, Fizza, the maid-servant of
Lady Fátimah (A), daughter of the Holy Prophet (S). She has conversed in nothing but the Holy Qur’án for the last 20 years.”