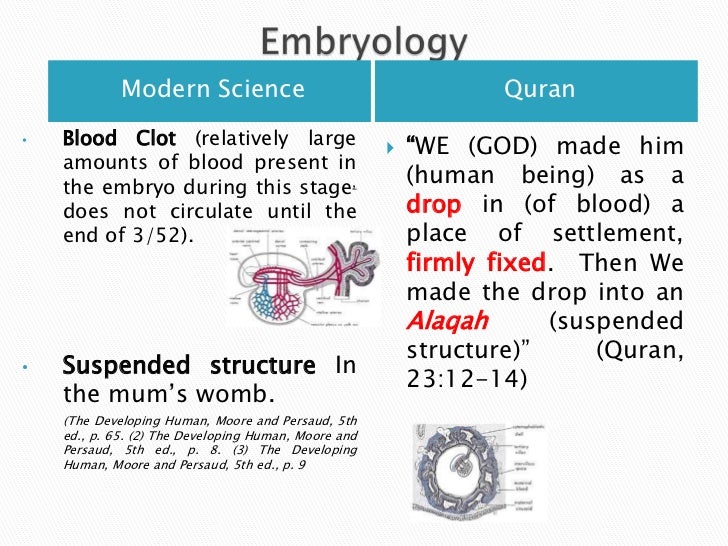 A few years ago, a group of men in Riyadh, Saudi Arabia
collected all of the verses in the Quran which discuss
embryology ‐ the growth of the human being in the womb.
They said, “Here is what the Quran says. Is it the truth?”
In essence, they took the advice of the Quran: “Ask the
men who know.” They chose, as it happened, a non‐
Muslim who is a professor of embryology at the
University of Toronto. His name is Keith Moore, and he is
the author of textbooks on embryology ‐ a world expert on
the subject. They invited him to Riyadh and said, “This is
what the Quran says about your subject. Is it true? What
can you tell us?”
While he was in Riyadh, they gave him all the help that he
needed in translation and all of the cooperation for which
he asked. And he was so surprised at what he found that
he changed his textbooks. In fact, in the second edition of
one of his books, called Before We Are Born… in the section
about the history of embryology, he included some
material that was not in the first edition because of what he
found in the Quran was ahead of its time and that those
who believe in the Quran know what other people do not
know.
I had the pleasure of interviewing Dr. Keith Moore for a
television presentation, and we talked a great deal about this ‐ it was illustrated by slides and so on. He mentioned
that some of the things that the Quran states about the
growth of the human being were not known until thirty
years ago. In fact, he said that one item in particular ‐ the
Quran’s description of the human being as a “leech‐like
clot” (‘alaqah) [Ghafir 40:67] ‐ was new to him; but when
he checked on it, he found that it was true, and so he
added it to his book. He said, “I never thought of that
before,” and he went to the zoology department and asked
for a picture of a leech. When he found that it looked just
like the human embryo, he decided to include both
pictures in one of his textbooks.
Although the aforementioned example of man researching
information contained in the Quran deals with a non‐
Muslim, it is still valid because he is one of those who is
knowledgeable in the subject being researched. Had some
layman claimed that what the Quran says about
embryology is true, then one would not necessarily have
to accept his word. However, because of the high position,
respect, and esteem man gives scholars, one naturally
assumes that if they research a subject and arrive at a
conclusion based on that research, then the conclusion is
valid.