Abū Ḥamīd bin Abū Bakr Ibrāhīm (c. 1145 – c. 1221; Persian: ابو حامد بن ابوبکر ابراهیم‎), better known by his pen-names Farīd ud-Dīn (فرید الدین) and ʿAṭṭār (عطار, Attar means apothecary), was a 12th-century Persian[3][4][5] poet, theoretician of Sufism, and hagiographer from Nishapur who had an immense and lasting influence on Persian poetry and Sufism. Manṭiq-uṭ-Ṭayr [The Conference of the Birds] and Ilāhī-Nāma are among his most famous works.

Mausoleum of Attar Neyshaburi in Nishapur, Iran
Information about Attar’s life is rare and scarce. He is mentioned by only two of his contemporaries, `Awfi and Tusi. However, all sources confirm that he was from Nishapur, a major city of medieval Khorasan (now located in the northeast of Iran), and according to `Awfi, he was a poet of the Seljuq period.

According to Reinert: It seems that he was not well known as a poet in his own lifetime, except at his home town, and his greatness as a mystic, a poet, and a master of narrative was not discovered until the 15th century.[4] At the same time, the mystic Persian poet Rumi has mentioned: “Attar was the spirit, Sanai his eyes twain, And in time thereafter, Came we in their train”[6] and mentions in another poem: “Attar has traversed the seven cities of Love, We are still at the turn of one street”.[7] 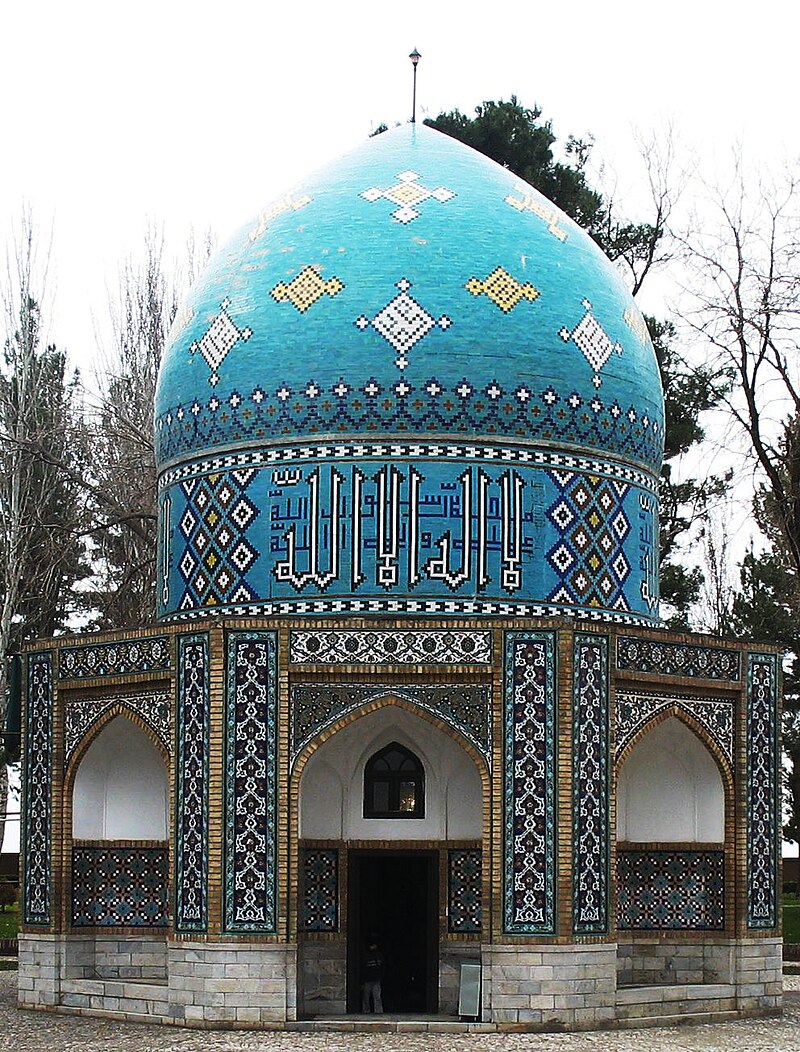 `Attar was probably the son of a prosperous chemist, receiving an excellent education in various fields. While his works say little else about his life, they tell us that he practiced the profession of pharmacy and personally attended to a very large number of customers.[4] The people he helped in the pharmacy used to confide their troubles in `Attar and this affected him deeply. Eventually, he abandoned his pharmacy store and traveled widely – to Baghdad, Basra, Kufa, Mecca, Medina, Damascus, Khwarizm, Turkistan, and India, meeting with Sufi Shaykhs – and returned promoting Sufi ideas.[8]

`Attar’s initiation into Sufi practices is subject to much speculation. Of all the famous Sufi Shaykhs supposed to have been his teachers, only one – Majd ud-Din Baghdadi a disciple of Najmuddin Kubra- comes within the bounds of possibility. The only certainty in this regard is `Attar’s own statement that he once met him.[9]In any case it can be taken for granted that from childhood onward `Attar, encouraged by his father, was interested in the Sufis and their sayings and way of life, and regarded their saints as his spiritual guides.[10] At the age of 78, Attar died a violent death in the massacre which the Mongols inflicted on Nishapur in April 1221.[4] Today, his mausoleum is located in Nishapur. It was built by Ali-Shir Nava’i in the 16th century and later on underwent a total renovation during Reza Shah the great in 1940.

Ayaz kneeling before Sultan Mahmud of Ghazni. A miniature painting made in the year 1472, is used to illustrate the six poems by Attar of Nishapur.
The thoughts depicted in `Attar’s works reflects the whole evolution of the Sufi movement. The starting point is the idea that the body-bound soul’s awaited release and return to its source in the other world can be experienced during the present life in mystic union attainable through inward purification.[11] In explaining his thoughts, ‘Attar uses material not only from specifically Sufi sources but also from older ascetic legacies. Although his heroes are for the most part Sufis and ascetics, he also introduces stories from historical chronicles, collections of anecdotes, and all types of high-esteemed literature.[4] His talent for perception of deeper meanings behind outward appearances enables him to turn details of everyday life into illustrations of his thoughts. The idiosyncrasy of `Attar’s presentations invalidates his works as sources for study of the historical persons whom he introduces. As sources on the hagiology and phenomenology of Sufism, however, his works have immense value.

Judging from `Attar’s writings, he approached the available Aristotelian heritage with skepticism and dislike.[12][13] He did not seem to want to reveal the secrets of nature. This is particularly remarkable in the case of medicine, which fell well within the scope of his professional expertise as pharmacist. He obviously had no motive for sharing his expert knowledge in the manner customary among court panegyrists, whose type of poetry he despised and never practiced. Such knowledge is only brought into his works in contexts where the theme of a story touches on a branch of the natural sciences.

Poetry
According to Edward G. Browne, Attar as well as Rumi and Sana’i, were Sunni as evident from the fact that their poetry abounds with praise for the first two caliphs Abu Bakr and Umar ibn al-Khattāb – who are detested by Shia mysticism.[14] According to Annemarie Schimmel, the tendency among Shia authors to include leading mystical poets such as Rumi and Attar among their own ranks, became stronger after the introduction of Twelver Shia as the state religion in the Safavid Empire in 1501.[15]

Although the contemporary sources confirm only `Attar’s authorship of the Dīwān and the Manṭiq-uṭ-Ṭayr, there are no grounds for doubting the authenticity of the Mukhtār-Nāma and Khusraw-Nāma and their prefaces.[4] One work is missing from these lists, namely the Tadhkirat-ul-Awliyā, which was probably omitted because it is a prose work; its attribution to `Attar is scarcely open to question. In its introduction `Attar mentions three other works of his, including one entitled Šarḥ al-Qalb, presumably the same that he destroyed. The nature of the other two, entitled Kašf al-Asrār (کشف الاسرار) and Maʿrifat al-Nafs (معرفت النفس), remains unknown.[17]

Manṭiq-uṭ-Ṭayr
Main article: The Conference of the Birds
Led by the hoopoe, the birds of the world set forth in search of their king, Simurgh. Their quest takes them through seven valleys in the first of which a hundred difficulties assail them. They undergo many trials as they try to free themselves of what is precious to them and change their state. Once successful and filled with longing, they ask for wine to dull the effects of dogma, belief, and unbelief on their lives. In the second valley, the birds give up reason for love and, with a thousand hearts to sacrifice, continue their quest for discovering the Simurgh. The third valley confounds the birds, especially when they discover that their worldly knowledge has become completely useless and their understanding has become ambivalent. There are different ways of crossing this Valley, and all birds do not fly alike. Understanding can be arrived at variously—some have found the Mihrab, others the idol.

The fourth valley is introduced as the valley of detachment, i.e., detachment from desire to possess and the wish to discover. The birds begin to feel that they have become part of a universe that is detached from their physical recognizable reality. In their new world, the planets are as minute as sparks of dust and elephants are not distinguishable from ants. It is not until they enter the fifth valley that they realize that unity and multiplicity are the same. And as they have become entities in a vacuum with no sense of eternity. More importantly, they realize that God is beyond unity, multiplicity, and eternity. Stepping into the sixth valley, the birds become astonished at the beauty of the Beloved. Experiencing extreme sadness and dejection, they feel that they know nothing, understand nothing. They are not even aware of themselves. Only thirty birds reach the abode of the Simurgh. But there is no Simurgh anywhere to see. Simurgh’s chamberlain keeps them waiting for Simurgh long enough for the birds to figure out that they themselves are the si-murgh — si (سی, “thirty”) + murgh (مرغ, “bird”). The seventh valley is the valley of deprivation, forgetfulness, dumbness, deafness, and death. The present and future lives of the thirty successful birds become shadows chased by the celestial Sun. And themselves, lost in the Sea of His existence, are the Simurgh.[18]

Tadhkirat-ul-Awliyā
Main article: Tadhkirat al-Awliya
Attar’s only known prose work which he worked on throughout much of his life and which was available publicly before his death, is a biography of Muslim saints and mystics. In what is considered the most compelling entry in this book, `Attar relates the story of the execution of Mansur al-Hallaj, the mystic who had uttered the words “I am the Truth” in a state of ecstatic contemplation.

Ilāhī-Nama
The Ilāhī-Nama (Persian: الهی نامه‎) is another famous poetic work of Attar, consisting of 6500 verses. In terms of form and content, it has some similarities with Bird Parliament. The story is about a king who is confronted with the materialistic and worldly demands of his six sons. The King tries to show the temporary and senseless desires of his six sons by retelling them a large number of spiritual stories. The first son asks for the daughter of the king of fairies (Pariyaan).

A miniature painting by Bihzad illustrating the funeral of the elderly Attar of Nishapur after he was held captive and killed by a Mongolinvader.
The Diwan of Attar (Persian: دیوان عطار‎) consists almost entirely of poems in the Ghazal (“lyric”) form, as he collected his Ruba’i (“quatrains”) in a separate work called the Mokhtar-nama. There are also some Qasida (“Odes”), but they amount to less than one-seventh of the Divan. His Qasidas expound upon mystical and ethical themes and moral precepts. They are sometimes modeled after Sanai. The Ghazals often seem from their outward vocabulary just to be love and wine songs with a predilection for libertine imagery, but generally imply spiritual experiences in the familiar symbolic language of classical Islamic Sufism.[4] Attar’s lyrics express the same ideas that are elaborated in his epics. His lyric poetry does not significantly differ from that of his narrative poetry, and the same may be said of the rhetoric and imagery.

Legacy
Influence on Rumi
`Attar is one of the most famous mystic poets of Iran. His works were the inspiration of Rumi and many other mystic poets. `Attar, along with Sanai were two of the greatest influences on Rumi in his Sufi views. Rumi has mentioned both of them with the highest esteem several times in his poetry. Rumi praises `Attar as follows:

Attar has roamed through the seven cities of love while we have barely turned down the first street.[21]
As a pharmacist
`Attar was a pen-name which he took for his occupation. `Attar means herbalist, druggist, perfumist or alchemist, and during his lifetime in Persia, much of medicine and drugs were based on herbs. Therefore, by profession he was similar to a modern-day town doctor and pharmacist. Rose oil means attar.

In popular culture
Several musical artists have albums or songs which share the name of his most famous work, Conference of the Birds, as well as the themes of enlightenment contained therein. Notably, jazz bassist David Holland’s album, which was written as a metaphor for his own enlightenment, and Om’s Conference of the Birds, which deals with extremely esoteric themes often connected with metaphors of flight, inward vision, destruction of self, and oneness with the cosmos.

Argentine writer Jorge Luis Borges, used in one of his short stories, The Approach to Al-Mu’tasim, a summary of The Conference of the Birds as a reference.

In 1963 the Persian composer Hossein Dehlavi wrote a piece for voice and orchestra on Attar’s ‘Forugh-e Eshgh’. The piece received its first performance by Saba Orchestra and the vocalist Khatereh Parvaneh at the National Television in Tehran. In 1990 the opera singer Hossein Sarshar performed this piece as well which its recording is available.