• Hazrat Syed Ahmad, also known as Sultan Sakhi Sarwar
• Son of Hazrat Zainul Abedin, who migrated from Baghdad and settled in Shahkot, near Multan in 1220 C.E.
• Died in the age of 53
• His shrine was built in the 13th century in Sulaiman Mountains, 35 kilometres from Dera Ghazi Khan city.
• Later, Mughal king Zahir-ud-din Muhammad Babur amended his tomb
• Annual Celebrations of Birth of Sakhi Sarwar in March every year.

Hazrat Syed Ahmad Sultan, popularly known as Sakhi Sarwar, was a 12th-century Sufi saint of the Punjab region.[1] He is also known by various other appellations such as Sultan (king), Lakhdata (bestower of millions), Lalanvala (master of rubies), Nigahia Pir (the saint of Nigaha) and Rohianvala (lord of the forests). His followers are known as Sultanias or Sarwarias.[2]

When Sakhi Sarwar’s Father Syed Janel Abidin, along with his wife and survivors, left Baghdad Sharif in the year 1126, leaving Baghdad Sharif in Shahkot, near Multan in India. After some time, Amina was killed and her two-year year-old son Ayerahan of Shahkot There were two daughters, of whom Ayesha was married to Sayyad Janel Abidin according to the 5th 20th Hijri, and according to the five sons of Ayesha, according to the 5th Chauvi Hijrī, 1130 is the birth of Sayyad Ahmad. After two years Abdul Ghani Khan Dhaohadha was born. All this family worked as farmer in Shahkot. In addition to doing work in Pir Peg’s work as well as working with them, the people of the time, and married with the elderly and worshiped them, these two brothers, Pir Lakh donor Seeing the great popularity of Jee and Khan, the four Bhai Deshpande made a vow to kill them. An intra-gifted giver gave to each of his brothers and his family, including his four elder friends, from Multan 60 KOs sohalemana mountain in the distance on the uninhabited area at the time received martyrdom in the years 1181.on Baghdad where he was blessed with the gift of khilafat by three illustrious saints: Gawth-ul-Azam, Shaikh Shahab-ud-Din Suhrawardi and Khwaja Maudood Chishti.[1] 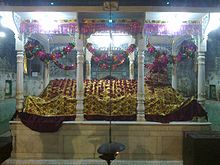 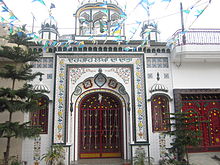 A shrine to the saint in Jalandhar

The saint selected the town of Nigaha this place as his abode. It is known as the ‘last place’ because of the hostile geographical and climatic condition. According to Rose (1970), the buildings of the shrine consist of Sakhi Sarwar’s tomb on the west and a shrine associated with Guru Nanak Dev Ji on the north-west. On the east is an apartment containing the stool and spinning wheel of Mai Aeshan, Sakhi Sarwar’s mother. Near there is a Thakurdwara, and in another apartment is an image of Bhairon.[1]

Within the enclosures of the shrine are the tombs of Sakhi Sarwar, his wife, known as Bibi Bai, and of the jinn whom he had held in his power and who brought many miracles for him.[2]

Near the shrine at Nigaha there are two other holy spots called Chom and Moza, both associated with Murtaza, the son in law of Sakhi Sarwar. At Chom, an impression of the former`s hand was said to have been imprinted when he prevented a mountain from collapsing over the cave in which he had taken shelter.[2]

To the west of the outhouses and within the shrine enclosure are two dead trees said to have sprung from the pegs which were used for the head and heel ropes of Kaki, the saint’s mare.[1]

Shrines are situated at Dhaunkal in Wazirabad district, and also in Peshawar and Lahore.[1]

There are numerous shrines in Indian Punjab where they are known as Nigaha. At some places Sakhi Sarwar is worshiped along with Gugga and their common shrines along with other deities are known as Panj Pirs or Nigahas.[1]

The shrine of Baba Lakhdata at district Una in Himachal Pradesh is known as chotta (minor/small) Nigaha where a large fair is organised every year.[3]

His followers who visit the Pir’s shrine at Nigaha are known as sang who refer to each other as bharais. The drumbeating bards who act as professional guides and priests at local shrines are called pirkhanas. Members of a sang address each other as pirbhaior and pirbahin (brother or sister in faith respectively).[2]

Their halting points on the routes are known as chaukis (posts) where the pilgrims traditionally slept on the ground. Devotees unable to undertake the pilgrimage to Nigaha would attend at least one of the chaukis. If they could not, they went to any other village on the route for a night. Those who could not go anywhere at all slept on the ground at home for at least one night in a year.[2]

This ritual of sleeping on the ground instead of on a cot is called chauki bharna.[2]

Various fairs are held in the Punjab region. The shrine at Nigaha holds a week-long Baisakhi fair in the month of April.[4] Fairs are also held at Dhaunkal in Gujranwala district during June/July, at Jhanda Mela (fair of the flag) at Peshawar, and Qadamon ka Mela (fair of the feet) at Lahore.[1]

A common ritual which is traditionally observed is to offer a raut, (a huge loaf prepared from 18 kilograms of wheat flour sweetened with jaggery weighing half that quantity) once a year on a Friday.[2]

The raut is traditionally prepared by a Bharai, who took one fourth of the rotas offering, the remaining being consumed by the donor family and distributed among fellow Sultanias (followers of Sakhi Sarwar).[2]

Syed Ahmad Sultan (Urdu, Saraiki, Punjabi: سیداحمدسلطان), also known as Sakhi Sarwar, Lakh Data, Nigah wala Pir and Lalan Wali Sarkar, was the son of Hazrat Syed Zain ul Abiden, who migrated from Baghdad and settled in Shahkot, near Multan in 1126 A.D (unconfirmed). Which is now called Sarwar Shahkot.The Holy shrine of Hazrat Zainul Abiden is in Sarwar Shahkot with the tomb of his second wife Hazrat Bibi Aysha, the mother of Hazrat Sakhi Sarwar and Abdul Ghani . His first wife is Bibi Aimna, the mother of Hazrat Sultan Qaisar(Tomb in Bukhara), Hazrat Syed Mahmood(Tomb in Sarwar Shahkot), Hazrat Syed Sairra (Tomb in Bukhara).[1] He studied from Syed Muhammad Ishaq, known as Miran Badshah who came from Iran and settled in Lahore during the time of the Tughlaq dynasty and is buried in the courtyard of Wazir Khan Mosque in Lahore. Syed Ahmed later went to Dhaunkal, Wazirabad.

The tomb of Hazrat Sakhi Sarwar was built in the 13th century in Sulaiman Mountains, 35 kilometres (22 mi) from Dera Ghazi Khan city. It is located in a small village named Muqam. Later, Mughal king Zahir-ud-din Muhammad Babur amended his tomb. It is a unique building of Mughal architecture. Thousands of people from all over the Subcontinentcome here on the Annual Celebrations of Birth of Sakhi Sarwar in March every year.

Sangh Mela, is a Vaisakhi fair during March and April, is celebrated in Sakhi Sarwar by people coming from Jhang and Faisalabad since centuries. This festival is celebrated by Hindus and Muslims especially at the time of wheat harvesting and at some places it is called as Basant. Throughout history, a large number of followers coming from different religions became the followers of Sakhi Sarwar. Max Arthur Macauliffe, a colonial office appointed in Punjab, observed in 1875 that not only Muslims but Hindus also visited the shrines during the [urs]. In the 1911 census of India, 79,085 Sikhs reported to be the follower of Sakhi Sarwar.[2] The annual Dhaunkal fair, Jhanda fair in Peshawar and Kadmon fair in Anarkali, Lahore[3] are also connected with Sakhi Sarwar.[4] Many villages in Punjab, India have shrines of Sakhi Sarwar who is more popularly referred to as Lakha Data Pir