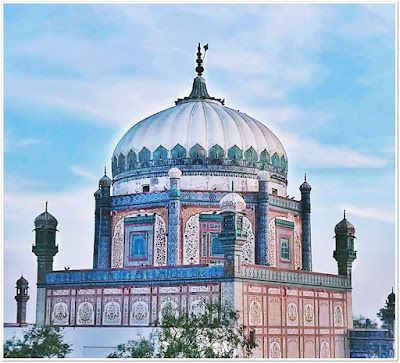 Makhdoom Abdul-Rāsheed Haqqanī  also known as Mākhdoom Rāsheed, was a Sufi saint of the Qadiriyya order, and one of the famous Sufi’s on the Indian Subcontinent. His paternal & maternal lineages makes him Hashmi Al-Hasani sadaat.

Makhdoom Abdul-Rāsheed Haqqanī, like his predecessors, stressed love as a means of realizing God. For him his love of God implied a love of humanity. His vision of the world was marked by a highly evolved sense of religious pluralism and kindness. His influence on the Muslims of Multan, South Punjab and Sindh was such that a paradigm shift was affected in their outlook towards worldly matters. People began to be inclined towards mysticism and prayers and remaining aloof from the world.

The descendant of Hāqqanī belongs to the family of Prophet Hazrat Muhammad (Peace Be Upon Him) and the tribe of Banu Hashim. He was maternal grandson of Ghaus Al-Azam Syed Abdul-Qadir Gilani (r.a) and cousin of Hazrat Makhdoom Bahauddin Zakariya (r.a). His ancestors had migrated from Mecca and settled in Aljabal Abad, Khwarezm (which is now known as Turkmenistan, Uzbekistan) before moving to Multan. When Mehmood Ghaznavi attacked India, his ancestors were along with Mehmood Ghaznavi. One of his ancestor Hazrat Shah Sultan (r.a) established the first school of Islam (madrassa) in Kot Karor.

Makhdoom Abdul-Rāsheed Haqqanī, was born on 15 June, 1185 (15th Rabi Al-Awwal 581H)at Kot Karor, Punjab to Hazrat Shah Wahid-ud-Din Ahmed Ghaus (r.a) and Bibi Syeda Fatima (r.a), (daughter of Sheikh Syed Issa Jillani) and died on 22 August, 1270 (3rd Muharram 669H). His full name was Muhammad Abdul-Rasheed. He received his early education at Kot Karor from his father and his grand-father Hazrat Shah Kamal-ud-Din Khawarzmi (r.a), and after that he moved to Multan, which had become a center for Muslim education. After memorizing complete Quran at the age of 15, he traveled to Mecca, Medina, Khorasan, Baghdad, Bukhara, Hamadan, Balkh for gaining more spiritual knowledge. He stayed 5 years in Medina and took education of Hadith and Fiqah and later given lectures to Islamic schools. After performing Hajj, he traveled to Palestine and visited the shrines of Holy Prophets (Peace be upon them) and attended the gatherings of famous saints of the time. He lived when the Ghaznavids, Ghauris and Balbans ruled in the Indus region. He lived 88 years of his life.

Preaching in the Sub-continent.

In Tariqat, he was the disciple of renowned Sufi master Hazrat Syed Ali Hamadani (r.a) who awarded him Khilafat at his Khanqah in Hamadan, where he gained deep spiritual knowledge and lived with his master for 3 years and also traveled to different cities in order to preach Islam and finally settled in Multan with the permission of his Sufi master.

When his cousin Hazrat Makhdoom Bahauddin Zakariya (r.a) came back from Baghdad and was appointed head of Suhrawardiyya order, most of the Hashmi family shifted to Multan.Makhdoom Abdul-Rāsheed Haqqanī did not join actively the Silsila but supported him the most. Most of South Punjab became Muslim due to his efforts.

His silsila (spiritual chain) is traced back to the Beloved Prophet as follows:

Ø  Hazrat Muhammad Mustafa (Peace Be Upon Him)

Now-a-days, Makhdoom Abdul-Rāsheed Haqqanī has thousands of descendants in the subcontinent and abroad from his four sons.

Makhdoom Abdul-Rāsheed Haqqanī had four sons who gained fame in their own right as great Sufi’s.

His progeny dispersed all over Indian subcontinent during the coming centuries and produced many famous people in all walks of life and scholarship. Today his descendants are found in Multan, Karor Lal Esan, Kot Karor, Makhdoom Aali, Lodhran, Bahawalpur, Vehari, Dunya Pur, Sukkur, Sindh, Faisalabad, Lahore, Delhi, Dera Ismail Khan, Dera Ghazi Khan, Khairpur, Kahror Pakka and almost everywhere in Pakistan and various parts of the world. Some of his descendants use Hashmi, Syed while some use Makhdoom with their name.

Makhdoom Javed Hashmi is the current care-taker of the shrine. It was instructed by the master of Makhdoom Abdul-Rāsheed Haqqanī , Hazrat Syed Ali hamadani (r.a) that do not appoint a permanent sajjada nasheen of yours. Let everyone seeks and gets the spiritual knowledge!

Makhdoom Abdul-Rāsheed Haqqanī were seven brothers and sister, who gained fame in their own right as great Sufi’s. 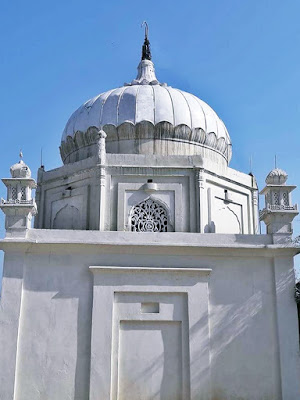 The urs of Hazrat Makhdoom Abdul-Rāsheed Haqqanī is held throughout the month of Haar (June), and attracts pilgrims from other areas. There is a water well near the mausoleum, which is said to produce water only during the month of Haar (June). It is believed that the water cures physical and spiritual diseases. The origin of this belief is a story that Makhdoom Abdul-Rāsheed Haqqanī (r.a) suffered from disease and after recovering threw the remaining medicine into the well. 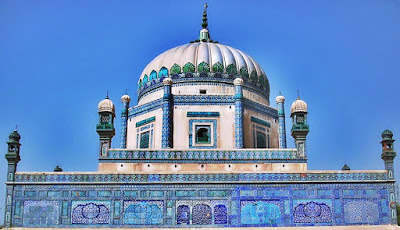 The mausoleum and adjacent unique five-dome mosque, reportedly one of two mosques of its type in the world, displays finest Multani art “Blue Pottery”. The mausoleum of Haqqani is in town “Makhdoom Rasheed” and was built one hundred and fifty years ago. It is said that there is no other mosque similar to this in Pakistan.

Sufi Saints during his Era. 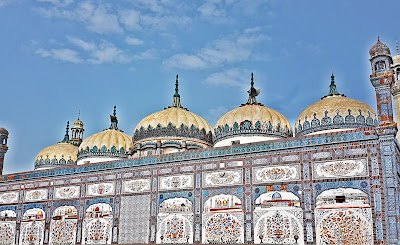 Town on His name.

“Makhdoom Rasheed” town is named after the Sufi saint Hazrat Makhdoom Abdul-Rāsheed Haqqanī who also founded this town almost one 1000 years ago in Multan, Punjab (Pakistan), 20 km distant from Multan towards the east on Vehari Road (old Multan Dehli Road). The population of Makhdoom Rasheed is approximately 40,000.

During the last two years of your age you adopted a private life totally and spent your time continuously in intimacy (Yaad-e-Ilaahi). One day when you were busy in worship (divine worship) that a saint came keeping a flower in his hands and said to Hazrat Makhdoom Sultan Ayub Qataal r.a (‘’grand-son’’) who was standing outside your private room (Hujra) to present this flower to Makhdoom Abdul-Rāsheed Haqqanī. Makhdoom Abdul-Rāsheed Haqqanī smelt that flower and offered two rakat namaz nawafil and in the last adoration of Allah (sajda) your soul flew away. Your shrine has been adorned beautifully with Blue tiles (kashi work). 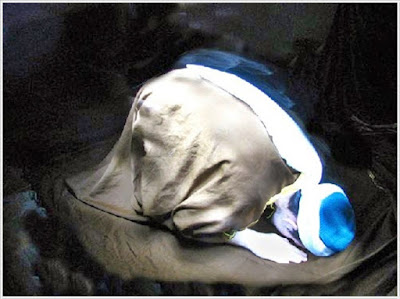