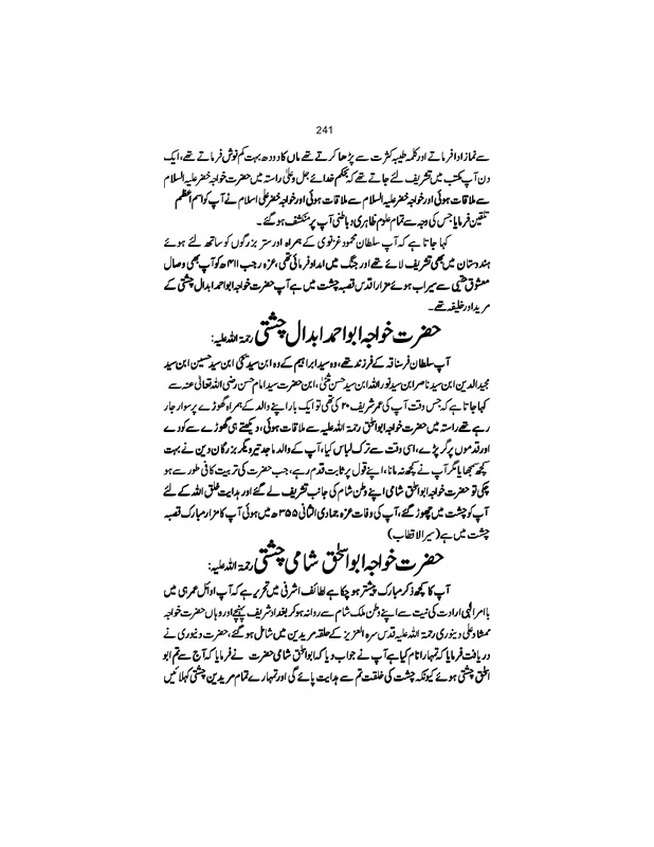 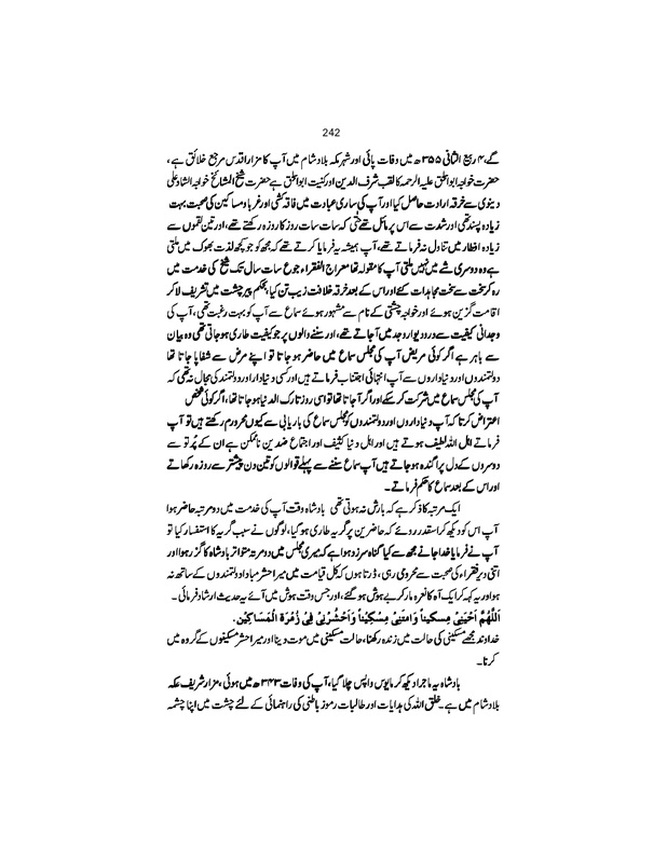 When he desired to become a mureed of Hazrat Khwaja Mamshaad Uloowe Dinwar (Radi Allahu Anhu)), he made Istighara for a period of fourty days. Thereafter, a voice from the unseen said to him,

“O Young Man! The way of the durwesh is very difficult, but whoever becomes a durwesh, he becomes a Friend of Allah and His Rasool (Salallahu Alaihi Wasallam), and he become acquainted with the Divine Secrets of Allah.”

“This devotee has presented himself in your service. I have firm faith that with the Master’s blessings, I will become a perfect durwesh.”

“I have made dua to Allah that he make you a perfect durwesh.”

Thereafter, he was initiated as a mureed.

Hazrat Mamshaad Dinwari (Radi Allahu Anhu) said to him:
“From this day on, you will be known as Abu Is`haaq Chisti, and you should go to Chist in Afghanistan, and spread the teachings of our Grand Masters, by which the people of that area will benefit, and whoever enters your Silsila until the Day of Qayamat will be called Chisti.”

He was amongst the Masha’ikh who loved the listening of Sama, and the ulema of his era did not oppose his mehfil-e-sama. He allowed the listening of sama under very strict conditions, and whoever attended his sama gatherings never turned towards sin ever again, and became conscious of Allah and pious. He never allowed the wealthy and wordly people into his sama gatherings, and is they entered without his permission, they were inflicted with some sickness.

The ruler returned to his home, and the mehfil-e-sama began. During the sama, Khwaja Abu Is`haaq (Radi Allahu Anhu) entered into a spiritual state and began crying, when miraculously, it began to rain, relieving the country of its severe drought.

“In hunger, one will find the secrets of Allah hidden. Whenever Allah wills to bestow upon a person some of His Secrets, He gives him the ability to stay hungry, because in this state, one has complete trust (tawakkul) in Allah.”

“O Abu Is`haaq! You are my son, and I have very high regard for you. I nominate you as my successor, and instruct you to spread my teachings and the name of our glorious Masha’ikh.”

He also advised him saying:

“Always conduct yourself well with the people, and love the poor more than the wealthy.”

When Khwaja Abu Is`haaq Chisti (Radi Allahu Anhu) wore the cloak of succession (khilafat), a voice from the unseen said:

“Congratulations upon you, O Abu Is`haaq, on your wearing of the blessed mantle.”

Khwaja Abu Is`haaq (Radi Allahu Anhu) began crying intensely. He was then asked the reason for his crying. He replied:

“All the veils have been removed from my eyes, and I see everything from the Arsh up to the Abyss, but my desire is not for the Arsh, but for the Lord of the Arsh.”

Abu Ishaq Shami is one of the first among the Sufi Chishti Order to call himself Chishti (of Chisht). The name Shami implies he came from Syria or even from Damascus (ash-Sham). Abu Ishaq Shami is supposedly to have met a Sufi who directed him to settle in Chisht, and accordingly he is known as Abu Ishaq Shami Chishti. He died in 940 in Damascus and some say that he is buried on Mount Qasiyun (many mazars are supposedly on this hill outside of Damascus where Cain slew Able), where later on also Ibn Arabi was buried but it is more likely that he was buried in Chishti e Sharif.

The Chishtia Order is one of the most popular and influential mystic orders of Islam. It derives its name from CHISHT, a village near Herat in Afghanistan, where the real founder, Hazrat Khwaja Abu Ishaq Chishti (RA) of Syria, had settled by the command of his spiritual guide, Hazrat Khwaja Mamshad Ali Dinwari (RA).

When Hazrat Abu Ishaq Chishti (RA) arrived at the Khanqah of Hazrat Mamshad Ali Dinwari (RA), the Sheikh asked him of his name. He replied “Abu Ishaq SHAMI”, and the Sheikh then said to him, “From this day people will refer to you as Abu Ishaq CHISHTI”, and that he should go to Chist in Afghanistan and spread the mystic order so that people in and around Chisht could receive spiritual guidance from him. Furthermore, the Sheikh said that all those people that would enter his (Khwaja Abu Ishaq Chisti) silsila, would be known as CHISHTI untill the day of Qiyamah.