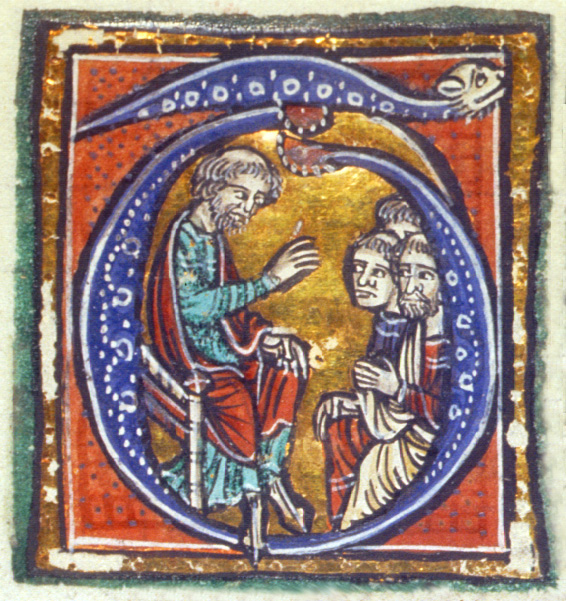 Ḥunayn ibn Isḥaq was the most productive translator of Greek medical and scientific treatises in his day. He studied Greek and became known among the Arabs as the “Sheikh of the translators“. He is the father of Arab translations. He mastered four languages: Arabic, Syriac, Greek and Persian. His translations did not require corrections; Hunayn’s method was widely followed by later translators. He was originally from al-Hira, the cabital of a pre-Islamic cultured Arab kingdom, but he spent his working life in Baghdad, the center of the great ninth-century Greek-into-Arabic/Syriac translation movement. His fame went far beyond his own community.[1]

In the Abbasid era, a new interest in extending the study of Greek science had arisen. At that time, there was a vast amount of untranslated ancient Greek literature pertaining to philosophy, mathematics, natural science, and medicine.[2][3] This valuable information was only accessible to a very small minority of Middle Eastern scholars who knew the Greek language; the need for an organized translation movement was urgent.

In time, Hunayn ibn Ishaq became arguably the chief translator of the era, and laid the foundations of Islamic medicine.[2] In his lifetime, ibn Ishaq translated 116 works, including Plato’s Timaeus, Aristotle’s Metaphysics, and the Old Testament, into Syriac and Arabic.[3][4] Ibn Ishaq also produced 36 of his own books, 21 of which covered the field of medicine.[4] His son Ishaq, and his nephew Hubaysh, worked together with him at times to help translate. Hunayn ibn Ishaq is known for his translations, his method of translation, and his contributions to medicine.[3] He has also been suggested by François Viré to be the true identity of the Arabic falconer Moamyn, author of De Scientia Venandi per Aves.[5]

Hunayn ibn Ishaq was a Nestorian Christian, born in 809, during the Abbasid period, in al-Hirah, to an ethnic Arab family.[6][7][8][9][10][11] Hunayn in classical sources is said to have belonged to the ʿIbad, thus his nisba “al-Ibadi.[12][13] The ʿIbad was an Arab community composed of different Arab tribes that had once converted to Nestorian Christianity and lived in al-Hira.[14][15] They were known for their high-literacy and multilingualism being fluent in Syriac, their liturgical and cultural language, besides their native-Arabic.[16][17][18]

As a child, he learned the Syriac and Arabic languages. Although al-Hira was known for commerce and banking, and his father was a pharmacist, Hunayn went to Baghdad in order to study medicine. In Baghdad, Hunayn had the privilege to study under renowned physician Yuhanna ibn Masawayh; however, Hunayn’s countless questions irritated Yuhanna, causing him to scold Hunayn and forcing him to leave. Hunayn promised himself to return to Baghdad when he became a physician. He went abroad to master the Latin language. On his return to Baghdad, Hunayn displayed his newly acquired skills by reciting the works of Homer and Galen. In awe, ibn Masawayh reconciled with Hunayn, and the two started to work cooperatively.[19]

Hunayn was extremely motivated in his work to master Greek studies, which enabled him to translate Greek texts into Syriac and Arabic. The Abbasid Caliph al-Mamunnoticed Hunayn’s talents and placed him in charge of the House of Wisdom, the Bayt al Hikmah. The House of Wisdom was an institution where Greek works were translated and made available to scholars.[20] (Sylvain Gougenheim argued, though, that there is no evidence of Hunayn being in charge of the Bayt al Hikmah[21]) The caliph also gave Hunayn the opportunity to travel to Byzantium in search of additional manuscripts, such as those of Aristotle and other prominent authors.[19]

In Hunayn ibn Ishaq’s lifetime, he devoted himself to working on a multitude of writings; both translations and original works.[19]

As a writer of original work 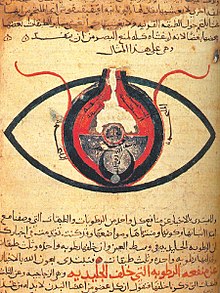 The eye according to Hunain ibn Ishaq. From a manuscript dated circa 1200.

Hunayn ibn Ishaq enriched the field of ophthalmology. His developments in the study of the human eye can be traced through his innovative book, “Ten Treatises on Ophthalmology.” This textbook is the first known systematic treatment of this field and was most likely used in medical schools at the time. Throughout the book, Hunayn explains the eye and its anatomy in minute detail; its diseases, their symptoms, their treatments. Hunain repeatedly emphasized that he believed the crystalline lens to be in the center of the eye. Hunain may have been the originator of this idea. The idea of the central crystalline lens was widely believed from Hunain’s period through the late 1500s.[22] He discusses the nature of cysts and tumors, and the swelling they cause. He discusses how to treat various corneal ulcers through surgery, and the therapy involved in repairing cataracts. “Ten Treatises on Ophthalmology” demonstrates the skills Hunayn ibn Ishaq had not just as a translator and a physician, but also as a surgeon.[4]

Hunayn ibn Ishaq’s reputation as a scholar and translator, and his close relationship with Caliph al-Mutawakkil, led the caliph to name Hunayn as his personal physician, ending the exclusive use of physicians from the Bukhtishu family.[19] Despite their relationship, the caliph became distrustful; at the time, there were fears of death from poisoning, and physicians were well aware of its synthesis procedure. The caliph tested Hunayn’s ethics as a physician by asking him to formulate a poison, to be used against a foe, in exchange for a large sum. Hunayn ibn Ishaq repeatedly rejected the Caliph’s generous offers, saying he would need time to develop a poison. Disappointed, the caliph imprisoned his physician for a year. When asked why he would rather be killed than make the drug, Hunayn explained the physician’s oath required him to help, and not harm, his patients.[20]

Some of Hunayn’s most notable translations were his translation of “De materia Medica,” which was technically a pharmaceutical handbook, and his most popular selection, “Questions on Medicine.”[3] “Questions on Medicine” was extremely beneficial to medical students because it was a good guide for beginners to become familiar with the fundamental aspects of medicine in order to understand the more difficult materials. Information was presented in the form of question and answer. The questions were taken from Galen’s “Art of Physic,” and the answers were based on “Summaria Alexandrinorum.” For instance, Hunayn answers what the four elements and four humors are and also explains that medicine is divided into therapy and practice. He goes on later to define health, disease, neutrality, and also natural and contranatural, which associates with the six necessary causes to live healthy.[19]

Hunayn translated writings on agriculture, stones, and religion. He translated some of Plato’s and Aristotle’s works, and the commentaries of ancient Greeks. Additionally, Hunayn translated many medicinal texts and summaries, mainly those of Galen. He translated a countless number of Galen’s works including “On Sects” and “On Anatomy of the Veins and Arteries.”[19]

Many published works of R. Duval in Chemistry represent translations of Hunayn’s work.[23] Also in Chemistry a book titled [‘An Al-Asma’] meaning “About the Names”, did not reach researchers but was used in “Dictionary of Ibn Bahlool” of the 10th century.

In his efforts to translate as much Greek material as possible, Hunayn ibn Ishaq was accompanied by his son Ishaq ibn Hunayn and his nephew Hubaysh. It was quite normal at times for Hunayn to translate Greek material into Syriac, and have his nephew finish by translating the text from Syriac to Arabic. Ishaq corrected his partners’ errors while translating writings in Greek and Syriac into Arabic.[3]

Unlike other translators in the Abbasid period, Hunayn opposed translating texts word for word. Instead, he would attempt to attain the meaning of the subject and the sentences, and then in a new manuscript, rewrite the piece of knowledge in Syriac or Arabic.[3] He also corrected texts by collecting different set of books revolving around a subject and by finalizing the meaning of the subject.[19] The method helped gather, in just 100 years, nearly all the knowledge from Greek medicine.[3]