He words removed the darkness of hearts

And they enter as light of truth in them

Choicest of mystics and quintessence of glorified souls; Sheikh-ul-Islam Hazrat Sheikh Salim Chishtri (ra) is considered to be one of the great and extraordinary Sufi amongst the great mystics, saints and noble souls on Indian territory. Who at the same time created a favorable environment between the royal house and the spiritual mendicants, paving the way of mutual bond of brotherhood and human equality between the people and rulersby breaking the hindering walls of hatred and hostility.Due to their blessings, they were able to create such a timeless mirror of national solidarity, communal harmony, and brotherhood among the people which remains a timeless mirror and did not fall back.

The rise of Fathepur-Sikri on the ridge of the Sikri hills as a great Sufi centre in northern India and its establishment as the new Mughal capital was a direct result of the spiritual eminence of Sheikh Salim bin Bahauddin Chishti (ra). Sheikh Salim’s (ra) ancestors were descendants of Baba Farid (ra). In 931/1524-25 Sheikh Salim (ra) returning to Sikri in 944/1537-38 and he again began living on the uninhabited ridge later to become the site of the Mughal capital. His fame as a haji, in conjunction with his intense self-mortification and meditation, resulted in Sikri becoming a centre for Sufis, alims and the poor.

The goal was through induction or revelation. This method was a ‘heart to heart’ one, that is, that god mysteriously revealed Himself to his heart, thus drawing him nearer to Himself. Even in the cold, wintry air of the highlands of Fatehpur Sikri the Sheikh wore nothing above his waist but a thin cotton shirt with a muslin garment over it and insisted on taking bath twice daily. Sheikh Salim (ra) was also surrounded by the simple stone-cutters who quarried stone for the Agra fort. They paid their homage to the Sheikh by building a small mosque around the original cell where the Sheikh performed chillas.

Above mentioned holy men and spiritual masters do not only belong to subcontinent, Asia but a large number of his disciples and successors are found in Islamic countries as well. Visitors throng to their sacred tombs and shrines even today.

At the ripe age of 28 years, Emperor Jalaluddin Muhammad Akbar desperately needed a male child as an heir to his throne. For this he visited to the shrine of several spiritual guides. But he had been greatly devoted to the Khawajas (saints) of Chishtiya order; especially he had immense devotion to Hazrat Baba Fariduddin Ganj Shakr (ra). In the longing and yearning of having children, he journeyed and visited to Pak Patan and camped there for several days. The spiritual successor of Hazrat Baba Farid Sahib (ra) asked Akbar to visit to Fatehpur Sikri hills and request Hazrat Sheikh Salim Chishti (ra) to pray for him for having a male child. Having heard much about Salim Chishti (ra) and highly inspired by the latter’s works, he decided to pay him a visit. As per the instructions, Jalaluddin Akbar returned from Pak Patan and proceeded to Fatehpur Sikri at Arawali hills where he attended the court of the renowned and revered Sufi Sheikh Salim Chishti (ra). He begged him with an utmost respect for a male child. Hazrat Sheikh asked him without giving any reply to wait for the Allah’s will. Your wish will be fulfilled soon. A little while later Hazrat Sheikh Salim (ra) raised his hand for Dua in the court of the lord and prophesized that Allah will bestow you three sons. As a mark of respect and admiration to Salim Chishti (ra). Akbar named his son Salim, who later became Emperor Jahangir. Whose birth took place at the Khanqah of Hazrat Sheikh Sahib (ra). In the exuberance of the moment he ordered a satellite town to connect with Agra to be built on the hills of Sikri. Later called Fatehpur Sikri, this town was to become a lasting monument to the architectural genius of India. He built beautiful palaces, royal baths, inns, Diwan-e-Khans, Diwan-e-Aam, and hospices which were called by the names of Darun Noor (house of light and house of pleasure) Jalaluddin Akbar called this place of fulfilling one’s vows and wishes. His second son prince Pervez also born here and third one at the abode of Hazrat Daniyal (ra) at Ajmer Sharif, whose name was also called Daniyal as a mark of respect of Hazrat Daniyal (ra). Sheikh Salim Chishti (ra) lived about 93 years and spent 75 years of his life in the service of humanity and guided the seekers of truth to their spiritual destination. Hazrat Sheikh Salim Chishti (ra) left for his heavenly abode in the last Ashrah (last 10 days) of the blessed month of Ramazan in 1571 corresponding to 989 AH, after appointing his second son Hazrat Sheikh Badruddin Chishti as his heir successor. Jalaluddin Akbar monitored arrangements of his burial rituals with his special aide Abdul Nabi which were conducted according to his honour and dignity. He was buried in the beautiful tomb, erected on this site of his new cell. Under Sheikh Salim Chishti’s (ra) personal supervision a splendid mosque and Khanqah were built into a complex. Akbar had sought permission from Sheikh Sahib to continue to build mosque if not completed in his life time. Therefore, this grand and beautiful mosque was completed by Akbar after the demise of his spiritual mentor and guide and on the front gate of the mosque following verses were inscribed. People still come to the mausoleum and pray with hopes of having a male heir to their family. Devotees seek blessings of the saint for getting their wishes

Dar Zamana Shah Jahan Akbar * Keh Azw Malik Rahe Nizam Aamad Sheikhul Islam Masjid Aarast * Kaz Safa Kaba Ahtraam Aamad Saal Atmam Eiyen Banae Rafi * Saniya AlMasjid Haram Aamad Some of the Sheikh’s (ra) numerous sons and grandsons continued in service to Akbar and Jahangir and were rewarded for their loyalty with high mansabs. Akbar built the tomb of his spiritual mentor Salim Chishti (ra) with the red sandstone. The tomb is located within the Friday Mosque complex at Fatehpur Sikri, which is located at the southern end of the Fatehpur Sikri palace complex. It occupies a prominent position within the mosque courtyard, facing its main entrance, the Buland Darwaza, one has to pass through 52 stairs to that, which is the highest gateway in the world and is an example of Mughal architecture. The original sepulcher was built by him between 1571 and 1580 to honour the Sufi saint Salim Chishti (ra). Shuda Rashk Taaq Saphere Buland 983h Envy the odd sphere high 983H Today, the tomb is a white marble structure raised on a plinth. Its ornamentation and construction are largely inspired by Gujarati tomb architecture, and include Hindu, Jain and Islamic elements. The original building commissioned by Akbar is believed to have been a smaller, red sandstone structure, consisting of today’s inner tomb chamber. Jahangir later introduced the Verandah, the southern porch and the extensive marble cladding. On the south, an ablution tank and a raised white marble plinth precede an entrance porch notable for its (nonstructural) serpentine brackets which traverse between the columns and the porch roof. The building, comprising the tomb chamber and a circumambulatory verandah, is square in plan and measures 14.63 meters per side. It is clad completely in white makrana marble. The inner tomb chamber, which contains the cenotaph of the saint, is also square in plan and measures 4.88 meters per side. The king used to enter the tomb through the royal gate to attend the tomb and used to pray there. During the period of Jahangir, marble mausoleum was built by Qutubuddin Chishti (ra), the grandson of Hazrat Sheikh Sahib (ra) and foster brother of Jahangir and a corridor around it and the herring bone roof decorated with perforated stone with an ornamental pattern constructed through calligraphy was so magnificent that whose example in carving art is hardly found anywhere in India. Floor made of marble stone, amber stone and black stone and beautiful railing inside the shrine is not installed anywhere in India. Even the ancestral home of Salim Chishti (ra) has been beautifully decorated with a large Sun motif at the main door and an array of impressive stone screen inside. The carved herring bone roof has been connected to “Sangtarash Mosque”, or Stone Cutter’s Mosque, the first building in Fatehpur Sikri. It is believed that Salim Chishti (ra) spent most of the time in this mosque on numerous occasions of his journeys to perform hajj during his life. Today, the mausoleum is one of the most visited monuments in India which is regarded as a premium accomplishment of Mughal architecture.

The Mughal Emperor Akbar came to Chishti’s home in Sikri to ask him to pray for a male heir to the throne. Chishti blessed Akbar, and soon the first of three sons was born to him. He named his first son Salim (later emperor Jahangir) in honor of Chishti. A daughter of Sheikh Salim Chishti was the foster mother of Emperor Jahangir. The emperor was deeply attached to his foster mother, as reflected in the Jahangirnamaand he was extremely close to her son Qutb-ud-din Khan Koka who was made the governor of Bengal.

His eldest son, Saaduddin Khan was ennobled Saaduddin Siddiky and was granted three jagirs in Gazipur District of Amenabad, Talebabad and Chandrapratap. These descendants in Bangladesh include Chowdhury Kazemuddin Ahmed Siddiky, the co-founder of the Assam Bengal Muslim League . The descendents of his second-eldest son, Shaikh Ibrahim who was granted the title ‘Kishwar Khan’ reside in Sheikhupur, Badaun in India.

Akbar held the Sufi in such high regard that he had a great city Fatehpur Sikri built around his camp. His Mughal Court and Courtiers were then relocated there. A shortage of water is said to be the main reason that the city was abandoned and it now sits in remarkably good condition as a mostly deserted city. Now it is one of the main tourist attractions of India. 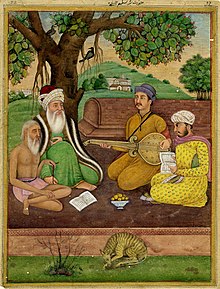 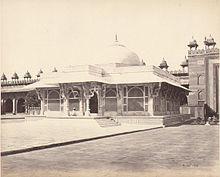 Another view of Salim Chishti Shrine