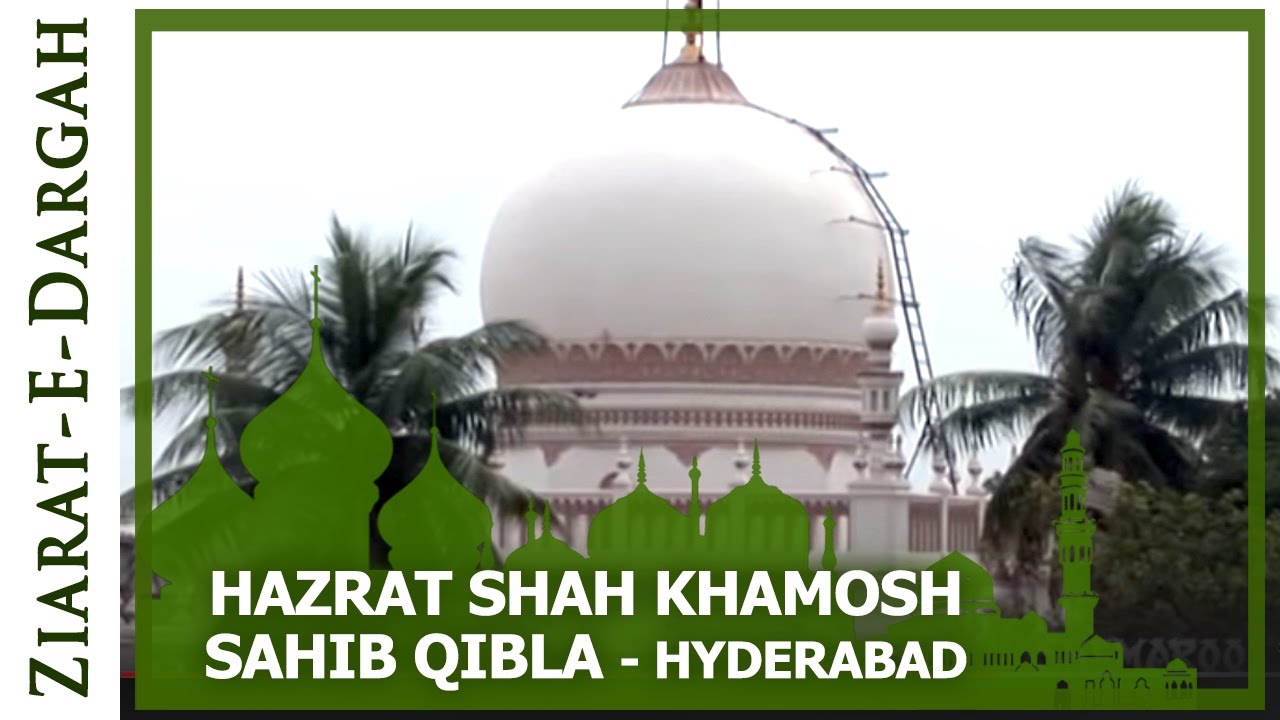 Among the heirs of the prophets, he was well known and famous pious personality who belongs to Deccan area and from his favour of knowledge and spiritual influence which was greatly benefitted all of the world and still there is great benefits is being available to the world in the present time. The pious personality’s name is Syed Shah Moinuddin and well know as Shah Qamos and who was Qutub (highest cadre in the spiritual pivot at axis) of his time and who has spent all his life in the teaching and propagation of the knowledge of the manifest and innermost.

So, in brief, he was Qutub (highest cadre in spiritual pivot at axis) of his time in the Deccan (South India) region and who did many great endeavours for the preaching and propagation of in South India and North India and around it and there was no such personality during his time in a Tariqa (spiritual way) of Sufism.

Hazrat Shah Qamos blessed birth was taken place in the 1204 Hegira year in Bidar city and which is well known as Mohammedabad at that time and his father was master of chain of Chisitya Sufi order and as well as well known learned person. He was much interested in advising and instructions, especially which are available for Taleb (students) and it refers in a Tariqa (spiritual way) of Sufism. .

His ancestor Hazrat Shah Raju Qattal Hussaini Sahib and whose mausoleum is situated in Khuldabad in Aurangabad. Hazrat Shah Qamos Sahib has spent his whole life as a bachelor person. There was find always a veil of coverlet on his face and he will not use to look anybody by turning over his eyes or also he did not look into the eyes of any person and in his life period, he used to live in the condition of silence.

Hazrat Shah Qamos has left this world on the Monday on 4th Ziqad in the year 1288 Hegira. A large number people in Hyderabad participated in his funeral prayer in Mecca mosque. Hazrat Shah Qamos was a great pious personality and holy person of his time who has worked hard and did endeavor for the strengthen of religion and its faith and he has also done great struggle and hard endeavor for the development of a shrine system in the Deccan area as well as in  North India. He was much interested in the poetry and which he has used for the expression of his deep love of the Noble Prophet (Salla Allahu ta’ala ‘alayhi wa Sallam) and knowledge of revelation. In his poetry, it finds the teaching and preaching of Sufism and spiritualism.

This incident triggered the beginning of a long quest for the Love of Allah Subhanahu wa t`aala.All the feelings of this young lad were overwhelmed by the quest for Allah and His love.

Dhikr became his favorite occupation. Hazrat Qibla started to spend a lot of time in solitude during which he pursued his thirst for the knowledge of his Beloved Lord, one of the things he deeply studied was the Deewaan of Hazrat Haafiz Sheerazi rahmatullah alaih from which he had unanswered questions and was disconcerted with couplets like

As to what is the “sajada rangi” who is the peer-e-MuGhaaN and what Mai is the Mai which is referred to here?

It was soon that he asked his elder brother Hazrat PeeraN Hussaini permission to travel to further his Quest for the truth in the Path of Allah. Hazrat’sbrother gave him a servant to accompany him and aHorse as a means of conveyance. Hazrat left in his quest for knowledge of his Beloved Allah.

As Hazrat Shah Khamosh reached a bit further out from Bidar, he gave the Horse to the servant and asked himto leave and started his journey on foot in his quest which took him first to Ajmer Sharif the place of restof Khwaja-e-Khwaajgaan Hazrat Moinuddin Chishti Rahmatullah alaih. Hazrat qibla remained at the Dargah of the Khwaja for many years doing Dhikr andTazkiyyatun Nafs until he was ordered by the Khwaja himself to go towards Punjab to Manikpur to Hazrat Haafiz Moosa Sahab to obtain the zaahiri faiz of his destiny.

Journey and bayah in Manikpur:

And hence he set on foot to his destination in Manikpur in Punjab. On his way he found a Sufi Shaikh with thousands of followers who at the sight of Hazrat Qibla raised to kiss his feet and said,”You are the one sent to Hafiz Moosa manikpuri and your Shaykh is better than me”. The murideen were puzzled to see their Shaykhs action and when asked about the young man the Shaykh said,” He is a Saayid of Deccan And has been sent by Hazrat Mueenuddin Hassan al-Sanjari – (Khwaja Gharib Nawaz) to further and complete his quest and reach his goal”

Before Hazrat Qibla reached Manikpur Hazrat Haafiz Qibla saw Hazrat Gharib Nawaaz in his dream who said“My child is coming to you Take him with you”.

It is recorded in most of Hazrat Shah Khamosh’s Biographies that the Dhikr of Hazrat Shah Khamosh used to be very intense and continuous , It is reported that not a single breath left his body without experiencing the sweet taste of Dhikr. It was due tothis reason that for thirty years of his life he seldom used to talk and used to convey his thoughts by actions and that too very occasionally.

He was then Given khilaafah by Hazrat Haafiz and was ordered to stay in Amroha uptil Hazrat Haafiz’ lifetime and then go and preach and stay in Deccan. Hazrat Haafiz said to Hazrat Shah Khamosh thatHazrat Ghareeb nawaaz has gifted you with the Qutubiyyat of Deccan.

On his arrival in Ajmer Sharif Hazrat Shah Khamosh was taken to the Dargah Sharif by his Vakeel at the Dargah Sharif as per tradition. His name Sahibzada Syed Murad Muhammad. Original handwritten vakalatnameh of Hazrat Shah Khamosh is still preserved in Ajmer Sharif at the Khaneqah. Please add up this piece of information too. Original persian written Vakalatnameh could be seen.

The mausoleum of Hazrat Bagmar Sahib has located at three kilometers away from Mahaboobnagr city and his connection of great devotion and pledge with Hazrat Syed Shah Abdul Rahman Hussaini of Koil Kunda and who was the grandson of Syed Shah Chanda Hussaini of Gogi Sharif. And Hazrat Syed Shah Asad Allah Hussaini Sher Sawar is one among caliphs and the disciples of Hazrat Syed Shah Abdul Rahman Hussaini, and among general, persons, he is well known and famous as Hazrat Bagmar Sahib. His ancestors and elders belonged to the country Syria. So, for this reason, he was born there. For the preaching and propagation of Islamic mission in India he was migrated to Delhi and from there he was arrived in Hyderabad city and from there he was arrived in Koilkinda and after living for some period of time there he was arrived in Palmur (Mahboobnagar city). And at that time in the Deccan Kingdom of Hyderabad Nizam Mulk Asif Jah first was ruling there, and regarding village Palmur there is coming old tradition that it was included Bugya Smano Lokai Palli and which is four kilometers away from Narayanpet (former Taluq Makhtal).
Hadrat Bagmar used to go four kilometers away from Palamur in the mountain of Chakki and in the adjacent mountains and he was used to spending his time there in the engagement of meditation. He was doing such hard endeavors in meditation and worship that so, for this reason, all grazing animals, beasts and birds of the jungle were becoming close by to him and so he himself used to ride in the jungle area on the tiger. In the above mountain areas, he was used to living along with his disciples and servants in the jungle area. This area was surrounded by thick forest in the jungle. It is possible that he was killed, any tiger in the jungle so for this reason he was becoming well known and famous as Bagmar Sahib.
Hazrat Sher Sawar has left this mortal world on in the year 1780 and he was buried in the mountain area in the jungle where he was used to reside generally there during his life time period.
His disciples and devotees have organized an annual death anniversary. As there is not available correct date of his death so there is coming tradition that in every year in the month of Shaban on the first Tuesday after Shabe Barat (15th night of Shaban) his annual Urs (death anniversary) is being celebrated.
The Urs (death anniversary)
People from various walks of life, irrespective of caste and creed, assemble to celebrate the Urs (death anniversary) which takes place on the above date of the Muslim calendar at the famous Shrine (Dargah) in Mahbubnagar city every year. Several hundred thousand devotees from near and far, irrespective of religion and beliefs, gather there to seek blessings. His grave is in Mahboonagar which is famous even today for the fulfillment of desire and wishes of the persons who visit his grave.
Conclusion.
To write about this great Sufi saint and great preacher is not only it is difficult and but it is very hard task as he was not only a great pious personality of his time in the area of the Deccan (South India) but he was also a great Sufi master so, in brief, he was a pious personality of his time in the Deccan region. As for a long time he was engaged in religious discourses, sermons, and spiritual training of the people and he did also many great endeavors for the preaching and propagation work of Islam in Deccan (South India) and around this region and there was no such personality during his time.
As per research and history record it can be said that he was among pioneers of Sufi masters who was migrated from a foreign country into the Deccan area and who started teaching and preaching of the Islamic mission in the old Deccan area and due to his hard endeavors and efforts large numbers of people accepted the religion of Islam in the olden days in the Deccan area