Historian were differed in about the lineage of the mother of Muslim<as>on her-. Some said that she was a bondwoman, as ibn Qotaibah stated in his book (Alma’arf) when he stated the following , “ ‘Aqeel gave the birth of Muslim, Abdullah, Mohammed, Ramla, and Obaidullah, from a bondwoman” . But Mohammed b. Habib Al Baghdadi stated in his book that his mother was Arabic Nabataean and said, “ the sons of the Nabataean women from Quraish were: Aqeel b. Abu Talib<as> his mother was Khalila one of the Farahidi clan”. His wife was Ruqayya, daughter of Imam Ali b. Abu Talib<as>. Sheikh Al Namazi said, “ Ruqaiya: the daughter of the commander of the faithful Ali<as>. Her mother was Alshabaab, but others said: Um Habiba, the daughter of Rabi’a Altaghlebia. Muslim has got married to her, and she gave the birth of Abdullah who was killed in Al-taf, Ali, and Mohammed, the sons of Muslim”. Tidings the prophet SAWA with the news of his birth and his supporting to Hussain AS Sa’eid b. Jubair narrated ibn ‘Abbas said that, Imam Ali<as> said to Allah’s Prophet <saww>: “O, Prophet of Allah, you indeed do love Aqeel” And the Prophet<saww> answered: I love him, but he gets more of my love due to Abu Taleb’s love for him, and his son shall be killed for the love of yours, and the faithful eyes will tears for him, and the close angels will praise him. Then Messenger of Allah cried until his tears fallen on his chest and said, “ I complain to Allah about what my progeny will face after me.” The resemblance of Muslim b Aqeel to Messenger of Allah <sawa> Ibn Hibban narrated, “ Muslim b. Aqeel b. Abu taleb Alhashemi. His nickname is Abu Dawood, and he was the most similar amongst the progeny of Abdul Muttalib to the prophet<sawa>. Al Bukhari stated in Al Tareekh Al Kabeer, “ Muslim b. Aqeel b. Abu taleb Alhashemi…. Narrated Amr b. Sho’aib said, “the one who heard Abu Huraira, he heard him saying that I never seen any of Abdul Muttalib progeny who resembles the prophet<saww>as Muslim b. Aqeel he was so handsome .” His heroism and his leadership to the right wing of the army of Imam Ali’s <as>Army in Siffin war Albalazari in (Ansab Alarab) stated, “ Muslim b. ‘Aqeel<as> was the strongest of progeny of ‘Aqeel and the bravest.” Ibn Shahr-Ashob in (Almanaque), “ 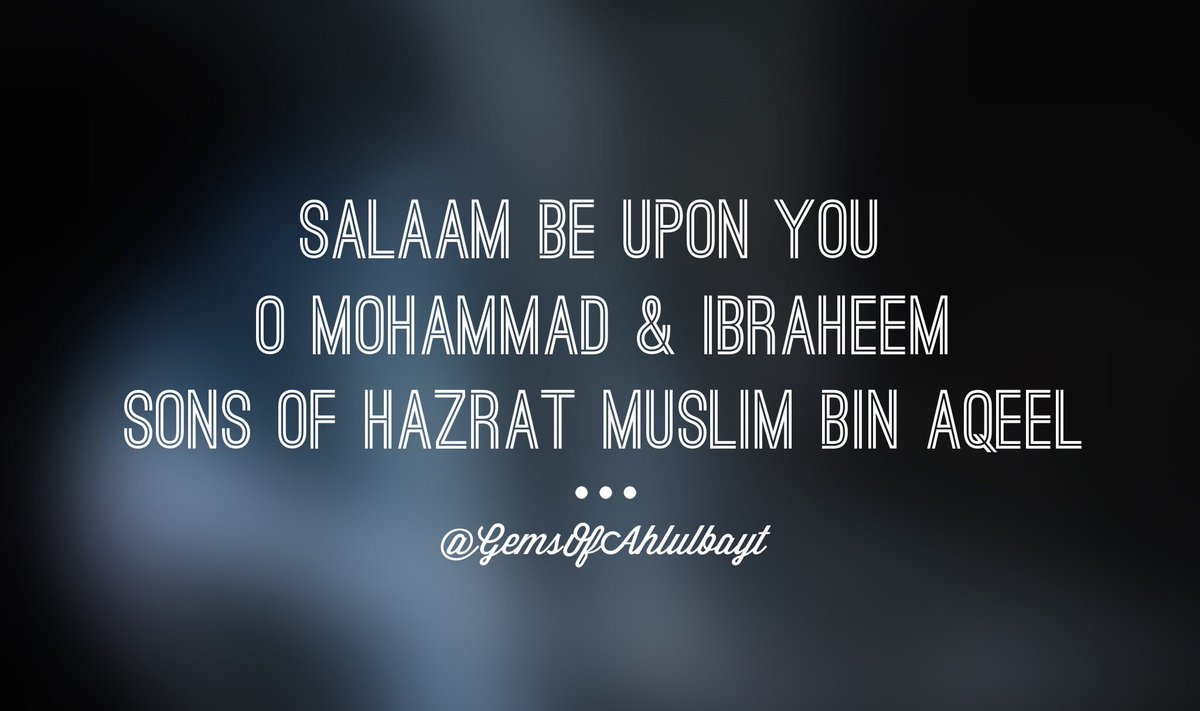 He made him -Mohamed b. Alhanafeia- the commander of the faithful AS in the war of Seffein with Mohammed b. Abu Baker, and Hashim Almerqal on the left wing of the army. And heImam Ali<as> made Hassan<as> Hussain<as>, Muslim b. ‘Aqeel<as>, and Abdullah b. Ja’far<as> on the right wing of the army” ). Also the author of Mustadrak Safinatul-Behar stated ,”Muslim b. Aqeel<as> was so strong that he can capture the hand of any man, and threw him above the house.” Sending Muslim b. Aqeel<as> to Kufa, and Imam Hussain’s<as> statement on his behalf When thousands of letters from Kufans, inviting Imam Hussain<as> to come to Kufa, to support him, and pledge allegiance to him, Imam Hussain<as> sent his cousin Muslim b. ‘Aqeel <as>to report him the news of Kufans, to check their intentions, and to take the pledges of allegiance and their promises of obedience to imam Hussain<as>. He Imam<as> wrote them a letter and sent it with him. The most important thing about this letter is the praising of Imam Hussain<as>to him -‘Aqeel-, trusting him, and announce him as the trustee of his family, which is a high statues, and a great virtue. No one could have all of this honor but a great man like Muslim b. ‘Aqeel <as>. The letter as stated in Al Tabari: “From Hussain b. Ali<as> the followers among the faithful and Muslims etc…I send to you my cousin, my brother and a trustworthy person from among my family Muslim bin ‘Aqeel. And I have instructed him to inquire about your affairs and write to me regarding it. And if he writes to me that your elders, the wise and the learned men hold the same opinion as your messengers have conveyed to me and as written in your letters, then I shall come to you quickly, Allah willing. Entering of Muslim b. ‘Aqeel<as> to Kufa, and the arrival of ibn Zayd may Allah curse him Muslim b. ‘Aqeel<as> arrived Kufa on 5th of Shawwal. He stayed the house of al-Mukhtar ibn Abu ‘Ubayd al-Thaqafi. Then people of Kufa started to come to him, and whenever a group of them comes he reads the letter of Imam Hussain<as> to them. After that, eighteen thousand people appeared before Muslim ibn ‘Aqeel and enthusiastically pledged their allegiance to Hussain ibn Ali as their Imam, and pledged to support Hussain<as> even with their lives. But the supporters of Yazid b. Mu’awiyah did not like this situation, nor the idea of pledges of allegiance to Imam Hussain<as> by Kufans. Therefore ‘Umar b. Sa’ad, Shibth b. Reb’i, and Shimr b. the-Al Jawshan, sent to yazid b. Muawiyah May Allah curse them, “ If you still want Kufa for any purpose then send a strong man”. Then he sent Ubaidullah b. Zeyad may Allah curse him in a long story full with details which we cannot mention here.

People violation to the allegiance and arresting Muslim b. ‘Aqeel Ubaidullah b. Zeiad followed the carrot and stick strategies and was able to buy the loyalty of many of tribes heads, clans in Kufa, and their leaders. Those worked on failing people, and scared them from the tyranny of Ibn Ziyad, and the risk of standing against him and supporting Muslim b. ‘Aqeel. People left after using power and money against them, and they break their promises and the allegiance. They watched the situation only, or supported Ibn Zayd may Allah curse him and stood on his side. Thus Ibn Ziyad and a result for this drooping, was able to separate Muslim b. ‘Aqeel<as> from people and became alone, which allowed to arrest him –Muslim- after a fierce battle, this heroic champ fought by himself and gave great examples on bravery and heroism. Also Hani b. Orwa who hidden him inside his house was arrested. When Ubaidullah b. Zeiad looked at Muslim b. ‘Aqeel reported,”May God kill me, if I do not kill you in such a way as no one in Islam has (ever) been killed before. By Allah, if I got ten trusted men, and was able to drink water, it would be impossible to you to see me in this castle”. “You are the person with the most right to commit crimes of innovation in Islam which have not been committed before,” Muslim replied, “for you will never abandon evil murder, wicked punishment, shameful practice, and avaricious domination to anyone (else).” Ibn Ziyad, now in a state of fury, abused Muslim ibn ‘Aqeel, Imam ‘Ali<as>, Imam al-Hasan<as> and Imam al-Husayn<as>. To this Muslim ibn ‘Aqeel replied, “O enemy of Allah! Do what you will. You and your father are worthier of this abuse.” “Take him up to the top of the palace,” ordered Ibn Ziyad, “and cut off his head, (throw it to the ground) and make (his body) follow it (to the ground).” “By God,” said Muslim, “if you really were from Quraish, and if there was any (real) kinship between you and me, you would not kill me. But you are the son of your father! (His father (Ziyad) came to Kufa, he did not spare a single Shiite there until he killed them.)” As Muslim ibn ‘Aqeel<as> was being lead to his execution, he praised and glorified Allah and invoked His blessings and benedictions upon the Prophet and his family saying, “O Allah! You be the final judge between us and these people who have summoned us, lied to us and betrayed us.” Then Ubaidullah b. Zeiad ordered to hit the neck of Muslim b. ‘Aqeel. Bukyer b. Hamran Alahmari beheaded Moslem b. ‘Aqeel<as>. He took him to the roof of the palace and ordered him to kneel and stretch his head over the edge of the wall of the palace. Then he mercilessly beheaded him. When the axe split his neck, Muslim b. ‘Aqeel’s head fell from the top of the palace to the ground. After this the soldiers were ordered to throw his body to the ground. Later, Ubaid-ullah ordered to take away Hani b. Urwa, and ordered to behead him in the market. Ubaidullah b. Zeiad sent the head of Muslim Ibn. ‘Aqeel<as> to Yazid May Allah curse him Ibn Asaker stated in his history book , “When Muslim and Hani were killed, the mercy of God be on them, Ubaidullah bin Ziyad sent their heads with Hani bin Abi Hayyan al-Wadi’i and al-Zubayr bin al-Arwah al-Tamimi to Yazid bin Muawiya. He ordered his secretary Amro b. Nafe’, to write a letter to Yazid about what had happened to Muslim and Hani..he said write “Praise be to God, Who exacted the dues of the Commander of the faithful and has given him sufficient provisions against his enemy. I (am writing to) inform the Commander of the faithful that Muslim b. ‘Aqeel<as> took refuge in the house of Hani’ b. ‘Urwa al-Muradi. I set look-outs and spies on them, concealed men against them, I tricked them until I brought them out. God gave me power over them. Thus I came upon them and had them executed. I have sent their heads to you with Hani’ b. Abi Hayyan and al-Zubayr b. Arwah al-Tamimi. They are both people who are attentive and in obedience to you, and of sincerity. Let the Commander of the faithful ask them about whatever of the affair he may wish; for they have knowledge and truth.

Farewell. Greetings.” The news of killing Muslim b. ‘Aqeel arrival to Imam Hussain<as> Imam Hussain<as> was on the way to Kufa when the horrible news of Muslim b. ‘Aqeel, Hani b. Urwa and others. He prayed for mercy to be upon them and then he took out a letter and read for them to let them know about the next stage, in purpose to acknowledge those who want to follow him to have full intentions to do so , and those who want to leave him too. Sheikh Al Mufeed narrated this letter as the following,“ In the name of Allah the Beneficent, the Merciful, indeed, we have received horrible news that Muslim Bin Aqeel, Hani Bin Ourwa, and Abdullah Bin Boqtor-Yoqtor- were killed. Our partisans had let us down, so, he who among you likes to leave, may do so and we will not prevent him in any way.” So people started to split, rapidly and heavily, away from him. Thus the remaining of the companions were those who came with him from Medina and holy Mecca. Yet, those who joined him on his way were nomads who thought that the Imam Hussein<as> was heading to a country paved with obedience to him, therefore he did not like them to join him until they know what they are facing, and he knew if he informed them then no one will come with him but those who want to comfort him, and die with him.