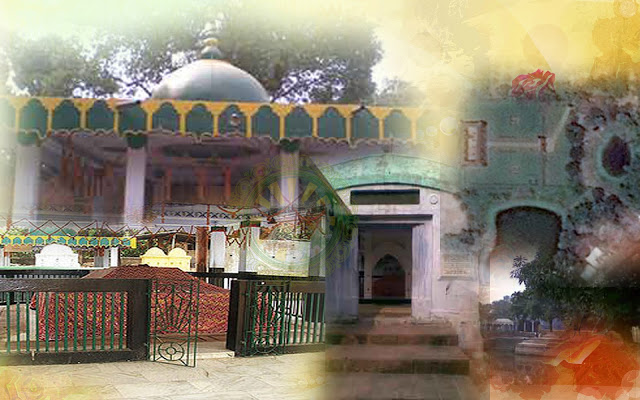 Hazrat Khwaja Ala ul-Haq Ganj-e-Nabat Lahori Pandwi was a 13th Century Sufi saint, khalifa of the well-known Chishti saint Hazrat Akhi Siraj. He was a distinguished scholar and a member of the elite in the government of Shamsuddin Ilyas Shah, sultan of Bengal. He was well-known for his charity works and he attained a very high level of ma’rifat (knowledge of God). After his demise, his disciples made their marks in various parts of northern India. His khalifa in Bengal was his son, Sheikh Noorul Haq, popularly known as Hazrat Noor Qutb-e-Alam. He was also the sheikh of the legendary Hazrat Ashraf Jahangir Semnani.

. He was a citizen of the city of Lahore and after the establishment of Muslim rule in Bengal, he settled in Pandua, West Bengal becoming the royal treasurer, where his son Hazrat Ala ul-Haq was later born. After commencing his religious education and training in the esoteric sciences, Hazrat Ala ul-Haq became a distinguished scholar. Proud of his wealth and learning, he took the title of Ganj-e-Nabat (the master of wealth).

Initiation into the Chishti Order

Hazrat Ala ul-Haq became extremely devoted to his sheikh, Hazrat Akhi Siraj, much to the surprise of his relatives, some of whom were high-ranking government officials. Such was his love and devotion to his master that when they travelled, like Hazrat Jalaluddin Tabrizi before him, he would carry a cauldron of hot food on his head even though it would burn his hair, so that he could provide him with warm food on demand. He later married one of the daughters of his sheikh.

After the demise of his sheikh, he himself became a spiritual leader and maintained a khanqah in Pandua. Many students received training from him, two of most prominent being his son, Sheikh Noorul Haq, better known as Hazrat Noor Qutb-e-Alam and Hazrat Ashraf Jahangir Semnani.

He was also the sheikh of Hazrat Nasiruddin Manakpuri. Sheikh Abdur-Rahman Chishti, author of Mirat-ul-Israr, described him as a “Sufi of exalted rank”.

As Sheikh of Ashraf Jahangir Semnani

When Hazrat Makhdoom Ashraf was 25 years of age, Hazrat Khizr (as) appeared before him in a dream, ordering him to abdicate his throne in Semnan, Iran and make way for Pandua Sharif where Hazrat Ala ul-Haq was waiting for him. After travelling for a period of two years, Hazrat Makhdoom Ashraf finally reached his destination. As soon as he saw the sheikh, he placed his head on his feet and tears of joy flowed from his eyes.

Hazrat Ala al-Haq was a remarkably generous individual and it is said that he used to spend large sums of his wealth in feeding his pupils, travellers and the poor and needy. On one occasion, it is narrated that he spent such a large amount on them that even the sultan could not match his generosity and out of jealousy banished him from Pandua to a town called Sonargaon. After two years, he was allowed to return to Pandua.

According to Akhbar-ul-Akhyar (p.143) he passed away on 1 Rajab 800 AH / 20 March 1398 AD while according to a book kept in possession of the caretakers of the shrine, he passed away on 786 AH / 1384 AD. It is related that Hazrat Makhdoom Jahanian Jahangasht, a famous Suhrawardi saint who had previously met Hazrat Ala al-Haq in Pandua, led his funeral prayer.

He lies buried beside his son Shaikh Nur Qutb Alam in the Choti Dargah also known as the Shash Hazari Dargah in Pandua Sharif. The complex comprises of a mosque, a reservoir, tombs, a rest house and various other structures.

His Urs is commemorated on the 23rd, 24th and 25th Rajab in Pandua Sharif.