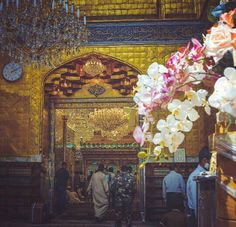 Shrine of Hazrat Abbas (as) 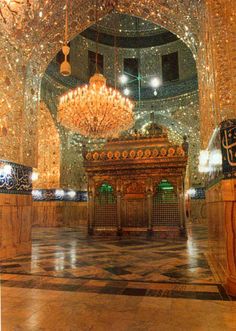 Ummul Baneen, from the very first day she entered Hazrat Ali’s (a.s.) house, treated the children of Bibi Fatimah (s.a.) with utmost respect. She brought up her own sons to look upon Imam Hassan (a.s.), Imam Hussain (a.s.), Bibi Zainab (s.a) and Bibi Kulthoom (a.s.), not as brothers and sisters but as masters and mistresses.

Hazrat Abbas (a.s.) grew up to be a tall and handsome man. He was so tall, that when he sat on a horse his feet touched the ground. He was so handsome that he was known as Qamar-e-Bani Hashim, the Moon of the family of Hashim.

When Imam Hussain (a.s.) decided to leave Madina in the month of Rajab 60 Hijrah, he did not encourage Muhammad Hanafia and Abdullah Ibn-e-Jaffer to accompany him. He wanted to make sure that no one at the time or in the future would suggest that Hussain (a.s.) wanted to fight for the khilafah.

Just before Imam Hussain (a.s.) left Madina, Ummul Baneen (a.s.) summoned all her four sons and said to them, “My sons you must remember that while I love you, Imam Hussain (a.s.) is your Master. If Imam (a.s.) or his sisters or his children get injured or hurt while you are still alive, I will never forgive you.” There were tears in Hazrat Abbas’s (a.s.) eyes as he promised his mother that he and his brothers would lay down their lives for Imam Hussain (a.s.) and his children.

1-Qamar-e-Banihashem (THE MOON OF BANIHASHEM’S PROGENY)
This was his most famous nickname. The reason behind that was his good looking face which was resembled to the moon.

2-Saqqa’ (THE ONE WHO BRINGS WATER)
This is his another famous nickname.
Since he was dealing with bringing water to Imam Hussein (A.S)’s camps and supplying Imam’s thirsty children with water, he was given this nickname.

3-Hamel-ul-Lava’ (THE ONE WHO CARRIES THE FLAGS)
This nick name was given to him because he was the one who carried the flag in Imam Hussein (A.S)’s troop.

Arrival in Karbala and shahadat (martyrdom)

The caravan reached Kerbala on 2nd Muharram. From the day the sad news of Hazrat Muslim’s (a.s.) murder had reached the caravan of Imam Hussain (a.s.), Hazrat Abbas (a.s.) and his brothers increased their vigilance to protect the Imam and others.

Then came the day of Ashura, after Zuhr prayers one by one the brave companions of Imam Hussain (a.s.) fell in the battle field. At last only Imam Hussain (a.s.), his son of 18 years Ali Akber (a.s.) and Hazrat Abbas (a.s.) were left. Imam Zain-ul-Abideen (a.s.) laid sick in his tent.

There were 90,000 enemy soldiers in the battlefield. They had all heard of the valour of Hazrat Abbas (a.s.). A cry arose, “Abbas is coming!” Yazeed’s soldiers started hiding behind one another. A few brave ones dared go near Hazrat Abbas (a.s.) but were soon put to death by the spear or by a kick.

Hazrat Abbas (a.s.) reached the river Furaat. He filled the mashk with water. He himself was very thirsty. In fact every one in Karbala was thirsty for 3 days but Hazrat Abbas (a.s.) was thirsty since the 2nd of Muharram for 9 days. He took the water in his palms, looked at it and threw it away saying, “O water of Furaat, my lips can welcome you only after Sakina has quenched her thirst !?” He placed the mashk on his ‘alam and started to ride back.

Umar ibn-e-Sa’ad cried out, “Do not let that water reach Hussain’s camp, otherwise we shall all be doomed!”

A soldier climbed a tree and as Hazrat Abbas (a.s.) was riding past the tree he struck his sword on the right shoulder The spear and the right arm fell on to the ground. Just then someone crept behind Hazrat Abbas (a.s.) and struck him on the left shoulder. His left arm and the ‘alam fell. Hazrat Abbas (a.s.) gripped the mashk with his teeth. His one objective was to get the water to Bibi Sakina (a.s.). Fighting with his feet he urged the horse to get him to Imam’s (a.s.) camp as quickly as possible.

Alas ! an arrow was shot. It went flying across the desert and hit the mashk. The water began to pour out and with the water all the hopes of Hazrat Abbas (a.s.) poured on to the sands of Kerbala to be buried forever in the thirsty desert. Hazrat Abbas (a.s.) now did not want to go back and face Bibi Sakina (a.s.). With his feet, he signaled the horse to turn back. The enemy surrounded him from all sides. A spear came flying and struck his eye. Abbas (a.s.) fell from the horse!!. Imagine someone falling from a horse and not having his arms to support him. As he fell, he cried out “My salaams to you Ya Mawla!”

Imam Hussain (a.s.) seemed to lose all his strength when he heard the voice of his dear brother Abbas (a.s.).

When Hazrat Abbas (a.s.) left to go to fetch water, Imam (a.s.) stood at the gate of the camp watching the ‘alam. Bibi Sakina (a.s.) was standing next to Imam Hussain (a.s.), also with her eyes fixed on the ‘alam. When Abbas (a.s.) reached the river bank and bent down to fill the mashk, the ‘alam disappeared from sight. Bibi Sakina (a.s.) was frightened and looked at her father. Imam (a.s.) said, ‘Sakina, your uncle Abbas is at the river bank’. Sakina (a.s.) smiled and said, ‘Alhamdulillah !’ and called out all the children to welcome Abbas (a.s.). When Hazrat Abbas (a.s.) lost both arms, the ‘alam fell onto the ground. Sakina (a.s.) could see it any longer! She looked at Imam Hussain (a.s.), but he turned his face away. Bibi Sakina (a.s.) began to tremble with fear and her eyes filled with tears. She raised her hands and prayed, ‘Ya Allah! Do not let them kill my uncle Abbas! I will never ask for water again!’ and ran inside to her mother.