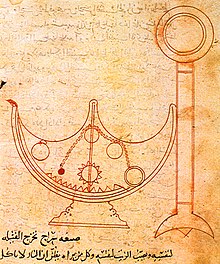 The Banū Mūsā brothers (“Sons of Moses”), namely Abū Jaʿfar, Muḥammad ibn Mūsā ibn Shākir (before 803 – February 873), Abū al‐Qāsim, Aḥmad ibn Mūsā ibn Shākir (d. 9th century) and Al-Ḥasan ibn Mūsā ibn Shākir(d. 9th century), were three 9th-century Persian[3][4] scholars who lived and worked in Baghdad. They are known for their Book of Ingenious Devices on automata (automatic machines) and mechanical devices. Another important work of theirs is the Book on the Measurement of Plane and Spherical Figures, a foundational work on geometrythat was frequently quoted by both Islamic and European mathematicians.[2]

The Banu Musa worked in astronomical observatories established in Baghdad by the Abbasid Caliph al-Ma’mun as well as doing research in the House of Wisdom. They also participated in a 9th-century expedition to make geodesic measurements to determine the length of a degree.[2]

The Banu Musa were the three sons of Mūsā ibn Shākir, who earlier in life had been a highwayman and astronomer in Khorasan of unknown pedigree.[5] After befriending al-Ma’mun, who was then a governor of Khorasan and staying in Marw, Musa was employed as an astrologer and astronomer.[6] After his death, his young sons were looked after by the court of al-Maʾmūn.[7] Al-Maʾmūn recognized the abilities of the three brothers and enrolled them in the famous House of Wisdom, a library and a translation center in Baghdad.[8]

Studying in the House of Wisdom under Yahya ibn Abi Mansur,[6] they participated in the efforts to translate ancient Greek works into Arabic by sending for Greek texts from the Byzantines, paying large sums for their translation, and learning Greek themselves.[7] On such trips, Muhammad met and recruited the famous mathematician and translator Thābit ibn Qurra. At some point Hunayn ibn Ishaq was also part of their team.[2] The brothers sponsored many scientists and translators, who were paid about 500 dīnārs a month. Had it not been for the brothers’ efforts, many of the Greek texts that they translated would have been lost and forgotten.[5]

The Banu Musa had a different view on area and circumference from the Greeks. In the research they translated, the Greeks looked at volume and area more in terms of ratios, rather than giving them an actual numerical value. Most of them based such measurements relatively on another object’s size. In one of their surviving publications, the Kitab Marifat Masahat Al-Ashkal (The Book of the Measurement of Plane and Spherical Figures) Banu Musa gave volume and area number values. This is evidence that they were not just translating and reproducing the Greek sources. They were actually building on concepts and coming up with some of their own original works.[1]

The most popular of their publications was the Kitāb al-Ḥiyal (The Tricks Book), which was mostly the work of Aḥmad, the middle brother, was a book filled with one hundred mechanical devices. There were some real practical inventions in the book including a lamp that would mechanically dim, alternating fountains, and a clamshell grab. Eighty of these devices were described as “trick vessels” that showed a real mastery of mechanics, with a real focus on the use of light pressure. Some of the devices seem to be replications of earlier Greek works, but the rest were much more advanced than what the Greeks had done.

They made many observations and contributions to the field of astronomy, writing nearly a dozen publications over their astronomical research. They made many observations on the sun and the moon. Al-Ma’mun had them go to a desert in Mesopotamia to measure the length of a degree. They also measured the length of a year[specify] to be 365 days and 6 hours.[1]

Although they were not made famous by their politics, they did have interests outside the world of science, mainly the oldest brother Muhammad.[citation needed]They were employed by the caliphs for many different projects, including the canal mentioned above, and they were also a part of a team of 20 hired to build the town of al-D̲j̲aʿfariyya for al-Mutawakkil. Taking on these types of civil projects naturally got them involved in the political scene in Baghdad. However, the height of Muhammad’s political activity in the palace came towards the end of his life, during a time when Turkish commanders were starting to take control of the state. After al-Mutawakkil died, Muhammad helped al-Mustaʿīn get the nomination instead of the caliph’s brother. When the caliph’s brother besieged the city of Baghdad, Muhammad was sent to estimate the size of the army, and when the siege was over he was sent to get the terms of how al-Mustaʿīn would renounce the throne. This evidence shows where Muhammad ranks at that time. He was trusted and respected by the highest levels of authority at that time.

The Banu Musa wrote almost 20 books, the majority of which are now lost.[2]

Most notable among their achievements is their work in the field of automation, which they utilized in toys and other entertaining creations. They have shown important advances over those of their Greek predecessors.[2] 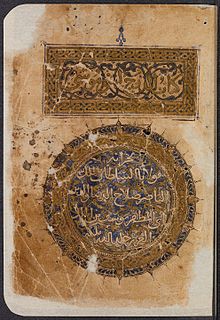 Cover of Kitāb al-Daraj (The book of degrees), by Ahmad, as found in the Saladin library, from before 1193 AD.[citation needed]

Mathematics in the Medieval Maghrib: General Survey on Mathematical Activities in North Africa

1. Introduction Figure 1: Front covers of two books by Ahmed Djebbar: Une histoire de la science arabe (Paris, 2001) and L’âge d’or des sciences arabes (Paris, 2005). The text that we will present here is the first part of a study which attempts to present the essential aspects of mathematical activity in North Africa since the 9th century. The abundance […]