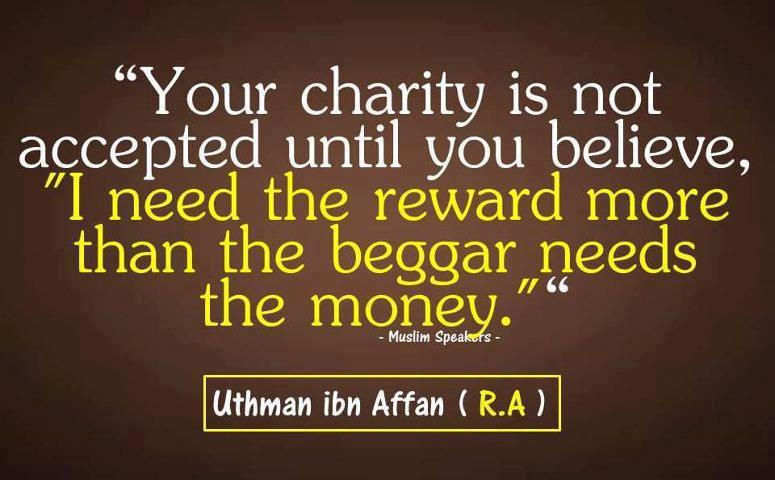 Sincerity shows its effect in everything. As long as it is given out with a sincere intention, the one who gives charity will be rewarded to the degree of their sincerity, even if the charity goes to one who is unworthy of it. According to the degree of one’s sin- cerity there arise positive tendencies towards goodness in those who are given the charity. The Messenger of Allah  has indicated this truth as follows:

“One time a man said: “I am going to give charity”.

That night he left his home with his charity and placed it in the hands of a thief without realising who it was. The next day the people of the town started to talk:

“What an amazing thing! Last night someone gave charity to a thief !”

“O Allah! Praise be to you. I am going to give charity today as well”.

Again he left his home with his money and this time without realising it, he placed it in the hands of a prostitute. The next day the people of the town began to talk once more:

“It cannot be! Last night somebody gave charity to a prostitute”.

“O Allah! Praise be to you even if I have given charity to a pros- titute. I am going to give charity again”.

Again that night, the man took what he had set aside for chari- ty and left his house, this time placing it in the hands of a rich man. The next day the people of the town began to chatter again in amazement:

“What is this! Last night charity was given to a rich man!”.

“O Allah! I am grateful to you for being able to give charity whether it be to a thief, a prostitute or a rich man.

As a result of the sincerity of this man, he saw someone in his dream say to him:

“Perhaps the charity you gave to the thief will embarrass him and stop him from stealing. And perchance the prostitute will regret what she had been doing and become a chaste woman. And maybe the rich man will take heed and give out to the needy from the wealth that Allah has given him”. (Bukhari, Zekat, 14)

And so these are the blessings of sincerity and true devotion… What is indicated in this hadith is the necessary sincerity and devotion that needs to be within the heart of the person who is giving charity. It also expresses the idea that intentions are better than deeds. However, let it not be assumed from this that it is a virtuous act to give out charity carelessly. On the contrary, when giving out charity and alms-giving, the believer should give it to those who are truly in need, and must search out the most worthy person if possible and give it to them.