Umm-ul-Banin is the glorious mother of al-’Abbas. Her name was Fatima, daughter of Hizam. Historians have referred to her name among names of eleven mothers each of whom were known for their glory, honor, and good reputation.1 Her father too was one of the most celebrated personalities of the Arabs, and was the chief of his people.

Historians have also mentioned many names of this great lady’s ancestors that were well known for their horsemanship, heroism, and courage.2

In conclusion, Umm-ul-Banin belonged to one of the most celebrated families in fields of honor, open-handedness, nobility, courage, and bravery. 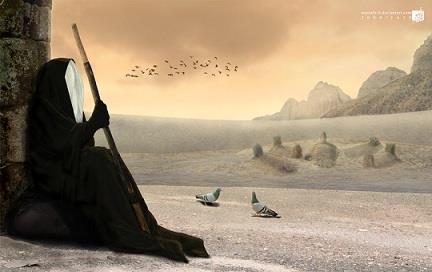 When Imam ‘Ali lost his wife Fatima, the daughter of Prophet Muhammad (S), he summoned his brother ‘Aqil who was a well- known genealogist to ask him to search for a lady who being a descendant of heroes would give birth to a courageous, immaculate hero whose mission would be to support his brother al-Husayn (S) in the field of Karbala.

Without hesitation, ‘Aqil advised his brother to propose to Umm-ul-Banin – from the tribe of Kelab because her fathers and people had been the foremost among others in fields of heroism and courage. Agreeing to his advice, Imam ‘Ali asked his brother ‘Aqil to go to that lady’s father and ask her hand for him.

As soon as ‘Aqil mentioned the matter with him, Aamir – Umm-ul-Banin’s father – welcomed and responded to it with pride.

Lady Umm-ul-Banin took care of al-Hasan and al-Husayn so remarkably well that she had asked her husband not to call her with her name Fatima, so that this name would not remind these two boys of their mother. They, however, felt the extreme kindness and sympathy of this lady who could fill a part of the great loss of their own mother whose demise had left a deep sadness in their minds.

Emotionally, Umm-ul-Banin had great love for al-Hasan and al- Husayn because of their perfection and unique morality. She in fact loved them more than her own children. She also preferred them to her sons in taking care and responsibility.

Except for this great lady, history has never seen a fellow wife act so sincerely with her stepsons. This is because this perfect lady believed that it was her religious duty to take care of the two Imams the love for who is imposed by God and revealed in the Qur’an:

Say, ‘I do not ask you for any payment for my preaching to you except (your) love of (my near) relatives’ 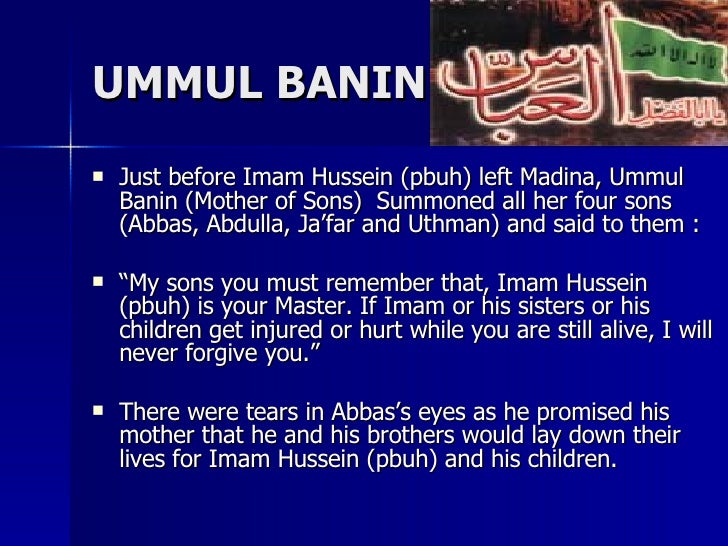 In the Sight of the Ahlul Bayt

Umm-ul-Banin had full knowledge of the actual standings and heavenly ranks of the Ahlul Bayt, therefore, she performed her duty towards them so perfectly. Historian have recorded that when she was carried to her husband’s house, al-Hasan and al- Husayn were sick. As soon as she noticed this, she willingly went on caressing them, using the nicest language. From that time onwards, she went on treating them very kindly. For this reason, she occupies a great position in the eyes of the Ahlul Bayt who had immense regard for her, especially because of her unique bearing in loyalty towards Imam al-Husayn (a).

After the Event of Karbala

Umm al-Banin was not present in Karbala. When the caravan of the Captives of Karbala arrived in Medina, someone informed her about the martyrdom of her sons; but she asked: “Tell me about al-Husayn (a).” When she heard that Imam al-Husayn (a) was martyred, she said: “I wish my children and everything in the world were ransom for al-Husayn (a) and he would have survived. “These words shows her great loyalty toward Ahl al-Bayt (a) and especially Imam al-Husayn (a)

As soon as she was back home after the tragedy of Karbala – Zaynab, daughter of Imam ‘Ali, visited Umm-ul-Banin for condoling her for the martyrdom of her four sons. Moreover, Zaynab used to visit her on the Eids.

Umm-ul-Banin gave birth to four sons: al-’Abbas, Abdullah, Ja’far, and Uthman. After the death of Imam ‘Ali, she did not marry again until she died.

In the Sight of Muslims

As for the Ahlul Bayt, this lady also occupies a great position in the sights of Muslims.