City of Saints Multan.Hazrat Shah Shamas Tabraizi Sabzwari, one of the
biggest name among Saints in Multan. Hazart was born at 15 Shahban friday
560 hijri in sabzwar, Hazart’s father name was Syed Salhu-din Muhamad
and mother’ name Syeda Fatima binte Abdul Hadi,Hazart was died in 28 safar
675 hujri at the age of 115 years and burried in Multan. 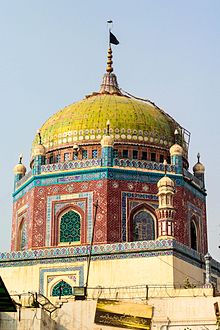 The Sabzwari shrine is located in Multan, Pakistan.

Shams Sabzwari too occupies a prominent position amongst the famous Ismaili ‘Da’is. He was sent by the twenty-ninth Ismaili Imam, Kassim Shah, to preach the Ismaili Nizari faith in South Asia.

Pir Shams conducted his missionary activities all over the North-western and Western parts of South Asia and in the context of Vedic scripture vis-a-vis Al-Quran, revived the idea of the necessity of a living guide in the minds of his non-Muslim audiences, bringing thousands of them to the fold of Ismaili Islam.

It is given in the Noor-a-Mubin that Pir Shams was born at Sabzwar in Iran where he spent his childhood and adolescence in pursuit of education. Probably, in his twenties he spent working under the tilage of his father, Pir Salahuddin, in Sabzwari and perhaps in his early thirties succeeded his father and was assigned the Da’wa of Badakshan and Northern India. Conducting his missionary work with great ardour and zeal, his activities ranged from Badakshan, through Kashmir, and from Punjab, Sindh to Gujerat with Multan as his headquarters. As he spent the better part of his later years at or around Multan he was laid to rest there, hence he is also famous as Pir Shams Sabzwari Multani.

The Mausoleum of Shamsuddin Sabzwari Multani ibn Pir Sayed Salahuddin is located about half a mile to the east of the Multan Fortsite, on the high bank of the old bed of the Ravi River near Aam-Khas Garden was born in 1200. He died in 1278 and the shrine was built by his grandson in 1330. The tomb is square, 30 feet (9.1 m) in height surmounted by a hemispherical dome. It is decorated with ornamental glazed tiles.[4]

Hadith on Animals used in qurbani