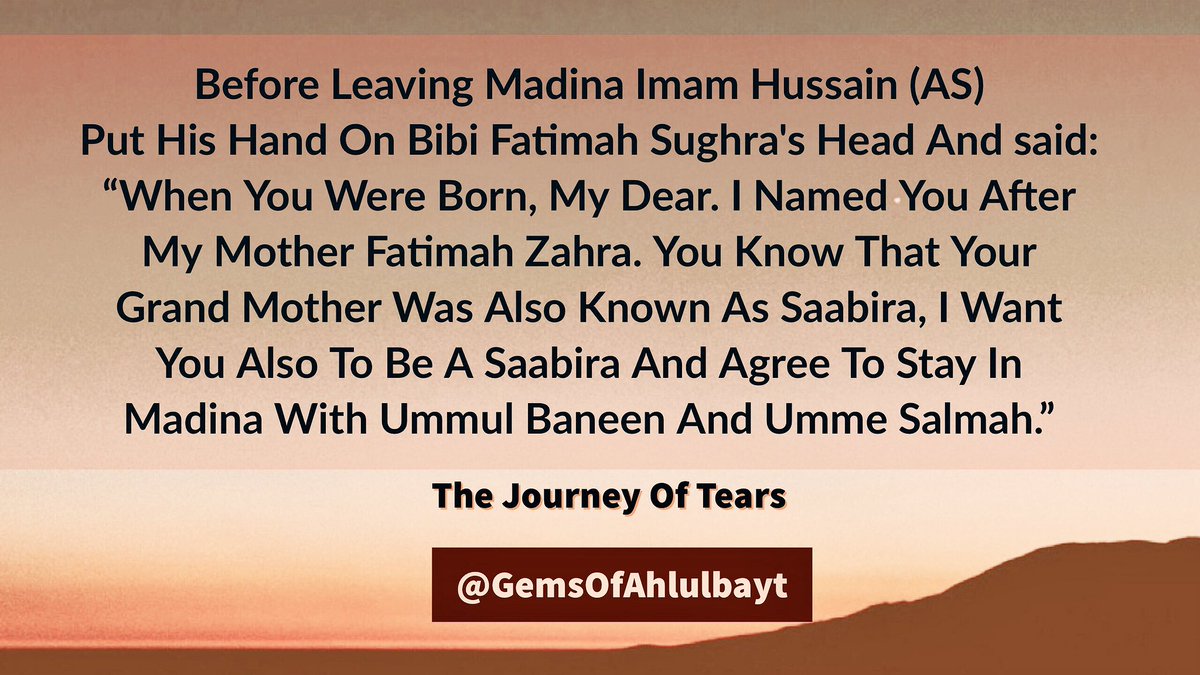 Fatema Sugra bint Husain was the eight-year old daughter of the early Islamic Imam Husayn ibn Ali. It is believed that this daughter was ill and left behind at Medina when he took part in the battle of Karbala (680).

There are two other daughter of Imam Husayn who were with him at Karbala: Sakinah (Fatema Kubra) and Rukayya (also called Sakinah).

Story of Fatema Sugra when Imam Husain started for Karbala

There is a story brief quoted from web[1] for all family lovers:

“The journey for Karbala started on 28th Rajab,60A.H., From Madina to Mecca. The hero of this first journey was Imam Hussain and the heroine was the memory of Fatima Sughra, his daughter whom he had left behind.

When every body doing preparation for journey, Fatima Sugra watched lying in bed, too ill even to get up. No one was saying anything about her going. She decided to wait till her father’s return.

She lay on bed praying that her father would agree to take her.”Ya Allah! Do not separate me from my father! How can I live alone, without my little brother Asghar? Ya Allah, let my father agree to take me with him. I do not want to be left alone in Medina.

Just then she heard her father’s foot-steps. She quickly wiped away the tears from her eyes, propped herself into a sitting position and put on a brave smile to convince her father that she was well enough to travel.

Imam Hussain sat on the bed, put his hand on Sugra head and said, “When you were born, my dear. I named you after my mother Fatima Zehra. You look know that your grand mother was also known as Saabira, which means the patient one. I want you also to be a saabira and agree to stay in Madina with Ummul Baneen (Hazrat Abbas’s mother) and Umme Salmah. Will you do that?

What could Sugra say? She nodded her head fighting back her tears. Imam kissed her and left the room.

Whenever the children of the Ahl al-Bayt were troubled by anything, they took their problem to Hazrat Abbas.

Sugra thought of her dear uncle, smiled hopefully, and sent for Abbas. Surely, he would find a way to solve her problem? Abbas came in.He was accompanied by Ali Akber.

Sugra looked at them and said, “I know how much you two love me. How can you then leave me and go away? If I die who will bury me?” They explained her that she was too ill to travel and promised her that they would come and fetch her as soon as they had settled somewhere.

Fatima Sugra said, “I will accept that as I do not wish to disobey my father. I will be brave and stay here.” She looked lovingly at her brother and added, “Ali Akber, promise me one thing though. When after you get married and return to Madina, and find Sugra gone, promise that you and your bride will visit my grave and recite Fatiha.”

Akber and Abbas could not control their tears as they said good bye. At dawn the caravan departed.

Supported by Umme Salmah on one side and Ummul Baneen on the other, Sugra waved good-bye. It was difficult to part with Asghar and both Imaam Hussain and Bibi Rubaab had to hold and console Sugra as she kissed her little brother good-bye.

Until Carvan turned the corner, Imam kept looking back. He would bravely smile and wave to his daughter. Ali Akber of course could not even do that because he was unable to control his tears.

As soon as they were out of sight, Imam Hussain stopped his horse and began to sob!

It is always so very difficult and so very sad for a parent and child to part! Days passed into months. Sughra would spend her days in the mosque or visiting Ummul Baneen.

Ramadhan passed. Eid was a difficult day for Sughra. She kept on thinking of Asghar, and Akber and her darling sister Sakina.

Then came Muharram. For some reason Sugra’s restlessness increased. One night she got up. She felt a little thirsty. She filled a cup with water. As she brought the cup to her lips, Sugra stared at the water, and screamed. The cup fell out of her hands.

Umme Salmah came running. “What is it, Sugra?”. Sugra was shaking with fear. She ran into the arms of Umme Salmah. “O grand-mother!” she cried, pointing at the cup, “As I lifted the cup to my mouth, I saw Ali Asghar’s reflection in the water.

I saw him spread out his little arms towards me. And then I heard him speak. He was saying, ‘Al atash, Ya Ukhti Fatimah.” (I am thirsty, O my sister Fatima!!.) This was the night of 9th Muharram, Shab-e-Ashura!!

Letter of Syyeda Fatima Sughra (sa)
After the departure of the holy caravan from Madina, it was Syyeda
Fatima Sughra’s (sa) routine to sit the whole day near the door,
waiting for any good news from the Holy Family. In the evening, she
used to go to her grandmother, weeping, because no news had
come. Then, she used to look at the footprint of her brother Ali Akbar
(asws) and wept again.
At the appearance of the moon of Moharram 61 Hijra, she wished
someone would bring news. She had a lot of thoughts, hopes, fears
and prayers for the wellbeing of her Holy Family. Her crying and
lamenting could be heard from the mausoleum of Rasool Allah
(sawaw).
On the day of Ashoor, Syyeda Fatima Sughra (sa) visited the
mausoleum of Rasool Allah early in the morning and she cried: O my
grandfather, my heart is weeping, but I do not know why. At noon
she went to her grandmother Umme Salma (sa), who asked her why
she was crying so much. Syyeda Fatima Sughra (sa) said: When I
was with grandfather this morning, I saw a terrifying dream. I saw
brother Ali Akbar (asws) descending from his horse with blood on his
beard and chest. He was brought to the tents with a deep wound on
his chest. Please pray that this dream is false. O my grandmother,
please give me pen and paper, I want to write a letter to Baba Jan
(asws). She wrote a letter and sat on the holy doorstep of her house,
which was next to the holy mausoleum of Rasool Allah (sawaw). She
said: O my grandfather (sawaw), I am missing my family and I wrote
a letter, please arrange somebody to take this letter to Karbala. One
person doing Ziyarat of Rasool Allah (sawaw) heard her weeping.
From behind the door, he said: Salaam to the Holy Family of Rasool
Allah (sawaw). I am going to Karbala, can I do something? Actually,
this person was an angel, because nobody can travel 1240 km from

Madina to Karbala so fast. Syyeda Fatima Sughra (sa) answered his
Salaam from behind the door and said: My Baba Jan (asws) left me
with my grandmother and I am missing him. I wrote a letter for Baba
Jan (asws); please give it to him. She included some gifts with the
letter.
This person arrived at Karbala, when Imam Hussain (asws) stood up
after levelling the holy grave of Ali Asghar (asws). Imam (asws)
heard someone behind him: My Salaam to the son of Rasool Allah
(sawaw). Imam (asws) saw a person with a camel weeping. He gave
Imam (asws) the letter and the gifts of his daughter. Imam (asws)
opened the letter and wept bitterly. The letter started like this: From
your old and weak daughter (though she was only 7 years old).
Imam (asws) went to the tents and said to Syyeda Zainab (sa); Your
daughter sent a letter. Syyeda Rubab (sa) asked: Is my daughter
alive? All the Ladies (sa) gathered and listened what was written in
the letter. Syyeda Fatima Sughra (sa) described her dream about Ali
Akbar (asws), about Imam Hussain (asws) surrounded by swords
and spears and about chains and prisoners and so on. She
requested Imam (asws) that, if possible, he would please come back
or he would at least tell what her dreams mean. Imam Hussain
(asws) spread out the gifts. There were dresses for Ali Asghar
(asws) which she had made herself.
Imam Hussain (asws) wrote an answer on the back of the letter: O
my daughter, I cannot write in detail due to some reason, I have no
time left, but I can tell you that we have preferred martyrdom over the
life of this world. Tomorrow your brother Sajjad (asws) will go to Kufa
and Shaam with the Holy Ladies (sa). Your Ali Asghar (asws) was
martyred for the sake of the Deen of Allah. If your gifts could have
arrived a few moments earlier, I could have dressed Ali Asghar
(asws) with your gift dresses. Now I have buried him. Your Qasim
(asws) is also sleeping in Ganj-e-Shuhada. Your sister Syyeda
Fatima (sa), his bride, has blood on her hands and head, instead of
Henna. I have married Ali Akbar (asws) with martyrdom. Just pray
that your brother Sajjad (asws) comes back safely from Shaam to
Madinah with the Holy Ladies (sa) and children. Your Baba Jan
(asws).