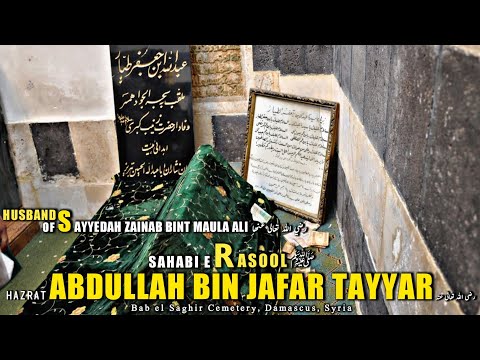 Hazrat Abdullah ibn Jafar (R.A) married to Sayyidah Zainab ibn Ali (R.A). Hazrat Ali (R.A) felt a great affection for his daughter and nephew and when he became the Caliph of the Muslims and moved from Medina to Kufa, Hazrat Zainab and Hazrat Abdullah (R.A) joined him.

Migration to Abyssinia, 615 and overseas preaching:

Abdullah ibn Jafar was in Abyssinia or the oversea in-between 615 and 621 and accompanied his father (probably the rest of the family) and Sa’d ibn abi Waqqas in overseas preaching in east Asia (northeast India including Manipur and China)after leaving Abyssinia in 615 by sea. They later returned to Abyssinia by 624, and then to Arabia.

Hazrat Zaynab (sa) grew up, many of the noblemen and great men of Arabia asked for her hand in marriage. They thought that due to their wealth and high social position they would be successful in marrying Hazrat Zaynab (sa).

For example, Ash’ath ibn-Qeis, who was one of the wealthiest men and a close relative to the first caliph, Hazrat Abu Bakr, was very dignified, and thought his closeness to the first caliph would made it possible for him to become the son-in-law of Amir Al-Muminin, Imam Ali (as).

It is said that one day he was in Imam Ali’s (as) house while he saw Hazrat Zaynab (sa) passing by from a distance. Then he asked her father if he could marry her, but Amir Al-Muminin, Imam Ali (as) refused and reproached him for his arrogance.

Among the men who were eager to marry Hazrat Zaynab (sa) was Abdullah ibn Jafar. He was a close companion to Prophet Muhammad (saw) and Amir Al-Muminin, Imam Ali (as).

Abdullah ibn Jafar was the son of Jafar-e-Tayyar, the martyr whom Prophet Muhammad (saw) had mentioned that he flies in the heavens with his two wings. Jafar-e-Tayyar was the brother of Amir Al-Muminin, Imam Ali (as) and was a forerunner in Islam and Jihad. His munificence and generosity had made him very famous among the Arabs so much so that they called him “the father of the poor.” His son Abdullah ibn Jafar had inherited this attitude.

All the historians refer to Abdullah ibn Jafar as a very gracious person. They have especially written about his generosity and benevolence. According to the historians, he was the foremost generous people of his time, to the extent that some have called him “the master of generosity.”

Abdullah ibn Jafar was a person whom Imam Ali (as) had trust in. Later he took a great part in the Jihads along with Imam Ali (as). In the battle of Siffinhe was one of the commanders of the Imam Ali’s (as) army.

Like other suitors, Abdullah ibn Jafar was interested in marrying Hazrat Zaynab (sa), but felt embarrassed to state his request directly. He sent a courier to Imam Ali (as) and offered the proposal. Imam Ali (as), who saw him the best, accepted his request. But how much was the marriage-portion? Imam Ali (as) put Hazrat Zainab’s (sa) dowry equal to her mother’s. However, this auspicious wedding had one condition. Hazrat Zaynab (sa) should be allowed to travel along with her brother Imam Hussain (as). She should be allowed to visit her brother too. In fact, it rarely happened that they didn’t meet everyday.

Finally, this wedding took place, and Hazrat Zaynab (sa) went to her husband’s house. Of course, the house of Abdullah ibn Jafar, who was a very wealthy man, was a big house with lots of servants, but history witnesses that Hazrat Zaynab (sa) never got attached to worldly life.

She was a pious woman in the perfect sense. Piety (Zuhd) in her vocabulary was exactly what her father depicted, “Zuhd is that one owns the world, not that the world and its charms become the owner of the person.”

The best evidence of Hazrat Zaynab’s (sa) piety was that she left her comfortable and prosperous life with servants and wealth for a divine and holy goal. Just like a person who is aware of the future and its happenings, she put her condition for marriage that she should be allowed to travel with Imam Hussain (as) to fulfill that goal.

Like other women, she was very affectionate. However, whenever necessary, she was strong like a mountain in the path of Islam. Like other mothers, she was a kind and loving mother, but when it came to defending Islam and the Noble Qur’an and her religious duty, she would sacrifice her children as well.

Who is like Hazrat Zaynab (sa) in having all that wealth and not being attached to it? Who is like her, having a warm house, nice husband and children, and bear hunger and homelessness in order to fulfilling her holy goals? Is this anything except Islamic piety?

Together this young couple had five children, of whom four were sons, Ali, Aun, Muhammad, and Abbas, and one daughter, Umm-e-Kulsoom.

Abdullah was also noted for his standing with Ali in battles. Ibn Hajar quoted Muhammad as having said that Abdullah was like him in character and had taken him by the right hand and prayed to God to extend His mercy over the household of Abdullah bin Ja’far. During Ali’s caliphate in Kufa, Abdullah was one of his four chief lieutenants (the other three were Ali’s three eldest sons). When Husayn received a request from the men of Kufa to come and lead them, Abdullah urged him not to go unless the Kufans first overthrew their Umayyad magistrates. When Husayn nevertheless left on the expedition that ended at Karbala, Abdullah sent his young sons Aun and Muhammad with his wife, Husayn’s sister Zainab.

The Kindness of the Slave Boy

Once Hazrat Abdullah Ibn Jafar ibn Abu Talib (R.A) was passing through a forest when he went passed an orchard, where an Abyssinian (Ethiopian) slave-boy was working.

Someone brought the slave-boy his daily food (three loafs of bread) and at the same time a stray dog came into the garden and stood next to him.

The boy said, “As you may be aware there are no dogs living round here. This poor creature must have travelled a long distance to reach here and it must be feeling very hungry. So, I felt ashamed to send it away, without serving it any food.” Hazrat Abdullah Ibn Jafar (R.A) said, “What will you have for food today?” “I shall go without food for a day, which I don’t mind,” said the boy.

Hazrat Abdullah Ibn Jafar (R.A) said to himself, “People criticise you for spending too liberally, you give to the poor generously but you still have something left for yourself, whereas this young boy has preferred to go hungry and gave all of his daily food to a dog. This young boy is far more generous than you.”

After this he came back to the town and, after purchasing the boy, the garden and all the other effects therein from the owner, he set the slave-boy free and gave him the garden as a gift.

Our Prophet (S.A.W) once said, “A man walking along a path felt very thirsty. Reaching a well he descended into it, drank water to fill and came out, then he saw a dog with its tongue hanging out, trying to lick up mud to quench its thirst. The man said to himself that the dog was feeling the same extreme thirst as he had felt a little while ago. So he descended once more into the well, filled his leather hosier with water and came up holding it by his teeth and gave the dog a drink. Allah appreciated the act of this man and forgave his sins.”

The Holy Prophet (S.A.W) was asked: “Messenger of Allah, are we rewarded for kindness towards animals as well?” He (S.A.W) replied “There is a re-compensation for kindness to every living things.” (Bukhari and Muslim)

Signs of Qayamat:Sun rising from the west

The Rise & Fall of The Dajjal

Signs of The End of Times

Ten Major Signs of the Last Day – Has One Just Occurred

LAST DAY MEANS LAST AGE The term ‘Last Day’ in reality stands for the ‘Last Age’, or the age which would culminate in the end of history—when the true Messiah, Jesus, the son of Mary (not son of God), would return to rule the world from Jerusalem with justice and ‘eternal’ rule. It would […]

This is a stern Reminder from Quran for all of us . This Ayah brings me to shiver every time I read it . May Allah save us from becoming negligent  and save us from greed , selfishness and  avarice . May Allah protect us from the traps of Shaitan and keep guiding us . […]

A mong the Signs of the Last Day as disclosed by Prophet Muhammad (peace and blessings of Allah be upon him) is that “time would move faster – so that a whole year would pass like a month, a month would pass like a week, a week like a day, a day like an hour, […]

It is the story of “Ka’b bin Malik ” RA . He was a Sahaba . He missed the military expedition headed for Tabuk because of his  procrastination .  The Story of Ka’ab RA teaches us about the effects procrastination can have on us.  It can, in fact, rob us of so many opportunities to do […]

THE GREAT BEYOND (Ilm e Gaib)