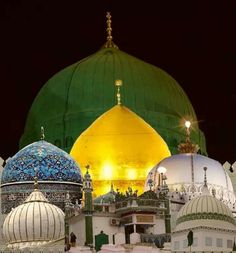 QUESTION 1:What do the Qur’an and Sunnah say concerning the visiting of graves, the spiritual life and awareness of the dead, and the presence of barakah (grace) and nur (light) at the graves of the pious ones among Allah’s servants?

QUESTION 5:Is it allowed to put flowers on the Qabr? ANSWER: It is narrated in Sahih al-Bukhari and Sahih Muslim that: Once, while travelling, Nabi Muhammad, sall-Allahu `alayhi wa sallam, stopped at a certain place and said that there was a grave in front of him, and that the person therein is busy suffering punishment. Nabi Muhammad, sall-Allahu `alayhi wa sallam, then broke off two branches from a date palm and placed in on the grave, and said that as long as the branches were fresh, the punishment would be lessened.This is because the fresh branches would be making the Dhikr of Allah, subhanaHu wa Ta`ala. So this act is a Sunnah, and people use flowers, as it is more available and also able to maintain its freshness for much longer.From this we can also deduce that if we ourselves perform Dhikr at the Qubur, it would also lessen the inhabitants’ punishment. Performing Dhikr at the Qubur of the Awliya would bring more blessings upon their respective Ruhs (souls). Doing this would be compliance with a divine order.It is stated in the famous Hanafi Fiqh book Fatawa Alamgiriyyah/Hindiyyah (Kitab al- Jana’iz) that it is allowed to put flowers on a grave. Mullah Ali al-Qari writes in the commentary of the above-mentioned Hadith in al-Mirqat fi Sharh al-Mishkat that:”Our Ulama have issued a ruling that to place fragrance and plants (over a grave) are a Sunnah practice”.One fails to understand how placing flowers over a grave means associating a Partner with Allah!!! To say that, actually means that flowers should only be put on the grave of Allah, subhanaHu wa Ta`ala! Astaghfirullah!!!!It is sad that sometimes, even so-called learned people also cannot understand the consequences of calling a normal practice of Muslims as Shirk.Nabi Muhammad, sall-Allahu `alayhi wa sallam, said that “The one who does not thank people, does not thank Allah, subhanaHu wa Ta`ala,”, and we owe it to the Prophets, `alaymmu-s-salam, and Awliya, who protected and spread the Deen of Allah, subhanaHu wa Ta`ala, over the ages, that we visit their shrines, dress it with flowers if we wish to (as it is Sunnah) and make Dhikr there. A Nation, which does not honour its true servants and heroes, is an ungrateful Nation and is bound to confusion.

3 thoughts on “Visiting The Graves Of Awliya Allah”