In The Name of Allah, The Beneficent, The Merciful.

The Arabic term khums literally means one-fifth.Khums is one of the mandatory rites of the religion of Islam and it is an essential obligation for a Muslim.It is referred to in the Quran in the surah Al-Anfal (“spoils of war, booty”), especially verse no 41, and in various Hadiths. 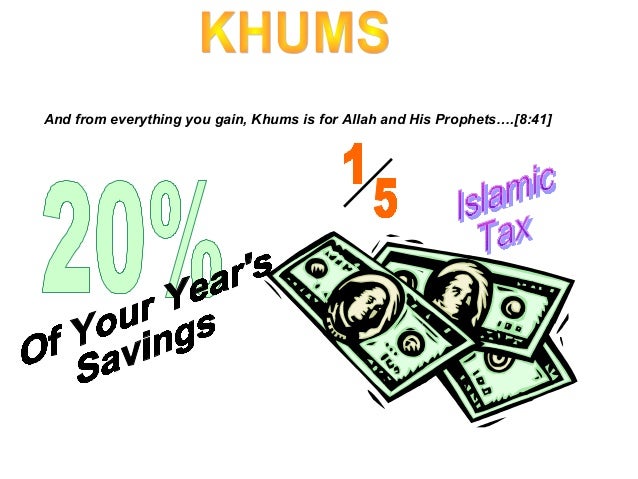 Khums in the Qur’an

“And know that anything you obtain of war booty (ghanimtum) – then indeed, for Allah is one fifth of it (khumusahu) and for the Messenger and for [his] near relatives and the orphans, the needy, and the [stranded] traveler…”

During the time of the Prophet (صلى الله عليه وسلم) one-fifth of the war booty was reserved for him, and he would distribute it between his family, the orphans, the needy and the travelers.

The purpose for this was the fact that accepting charity (zakat or sadaqah) was forbidden for the Prophet (صلى الله عليه وسلم) and his family, so khums was meant to provide for his and his family’s expenses. Refer to Tafseer Ibn Katheer 4/68-69.

Khums and ghanima are revealed in the Quran. For example,[3]

They ask thee concerning (things taken as) spoils of war. Say: “(such) spoils are at the disposal of Allah and the Messenger: So fear Allah, and keep straight the relations between yourselves: Obey Allah and His Messenger, if ye do believe.”

— Quran 8:1
“Say to the Unbelievers, if (now) they desist (from Unbelief), their past would be forgiven them; but if they persist, the punishment of those before them is already (a matter of warning for them). And fight them on until there is no more tumult or oppression, and there prevail Allah altogether and everywhere; but if they cease, verily Allah doth see all that they do. And know that out of all the booty that ye may acquire (in war), a fifth share is assigned to Allah,- and to the Messenger, and to near relatives, orphans, the needy, and the wayfarer,- if ye do believe in Allah and in the revelation We sent down to Our servant on the Day of Testing,- the Day of the meeting of the two forces. For Allah hath power over all things.”

Khums in the Hadith

Sunnah in Volume 4, Book 52 of Sahih Bukhari is dedicated to khums.

3. It has been quoted in “Sunan of Beihaghi1” from Abu Harira that Prophet (S) said:

It should be considered that Rekaz (it is pronounced like Ketab) literally means any kind of asset that is placed in earth; and accordingly all mines are called Rekaz; and also all treasures and assets which have been remained in earth from former humans are called Rekaz; and the fact that we see in the Hadith above it has been interpreted to mines of gold and silver is that a kind of clear samples not being exclusive to them.

4. It has been quoted in a Hadith from Anas ibn Malik that: We were in a road with Prophet (S), one of our friends entered to ruins … and he found there a treasure of gold … they weighted that and it was about two hundreds dirhams, Prophet said that it is Rekaz and it is obligatory to pay its Khums.

5.It has been quoted in Sahih of Muslim from Abu Harira that Prophet (S) said: “فی الرّکاز خمس” (there is Khums in Rekaz). The same matter has been also mentioned in Sahih of Bokhari.3

It has been affirmed in this Hadith which is one of famous Ahadith among Sonnies that there is Khums in Rekaz and as we said and it is understood from its main root and also it has been affirmed in some famous dictionaries like Qamoos, Rekaz has a vast meaning which consists of any kind of asset that is placed and saved in earth, like mines and treasures of former humans that has been buried in lands; and accordingly, some pf Sunni Faqihs like “Abu Hanifa” affirmed that Khums is obligatory in mines and Nisab (minimum needed level or amount) of Zakat is not a condition in this case

(a) What is taken from the fighting enemies by force.

(b) All earnings generally…Furthermore, the saying al-ghunm bi ‘l-ghurm means that the profit stands against expenses, i.e., as the owner is the sole proprietor of the profit and nobody shares it with him, therefore only he bears all the expenses and risk.’ 1
This implies that in Arabic language al-ghanimah has two meanings: one the spoils of war, and the other ‘profit’. The above quoted proverb also proves that ‘profit’ is not uncommon meaning.

When a word in the Qur’an can be interpreted in more than one way, it is incumbent upon the Muslims to seek guidance from the Prophet and the Ahlul Bayt. Otherwise, they would be guilty of tafsir bi ‘r-ra’iy (interpreting the Qur’an according to one’s own personal views); and this is a sin which pushes the sinner into jahannam.

The History of Khums

Khums is one of those things which were introduced by `Abdu ‘l-Muttalib, the grandfather of the Prophet, and continued in Islam. Acting upon a command of God given to him in dream, when `Abdu ‘l-Muttalib rediscovered the well of Zamzam, he found in it many valuable things which were buried in it in very remote past by the Ismailites when they feared that their enemies would usurp them.

When `Abdu ‘l-Muttalib found that buried treasure, he gave away its one-fifth (literally, khums) in the way of God and kept the remaining four-fifth to himself. Then it became a custom in his family; and after the hijrah of the Prophet, the same system was incorporated in Islam. Thus the first khums was not given from the ‘spoils of war’, but from a buried treasure (which is one of the seven items eligible for khums.)

(a) Minerals: eligible for khums in Shi`ah and Hanafi sects.

(b) Buried treasure: eligible for khums in all Muslim sects (that is, Shi`ah, Hanafi, Maliki, Hanbali and Shafi`iy). 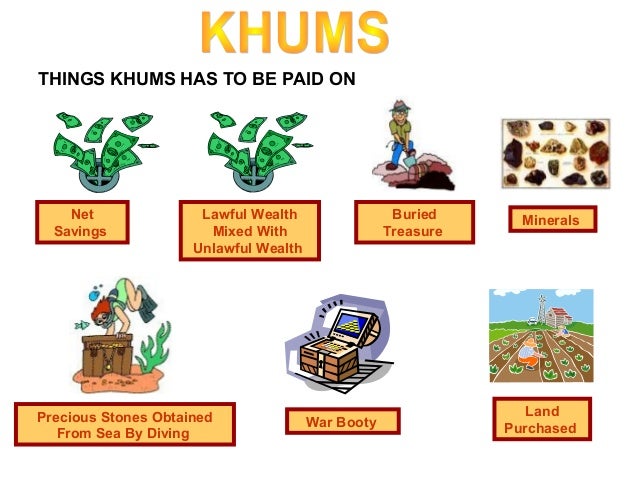 The Interpretation of the Qur’an

As mentioned earlier, the interpretation of the Qur’an must be based on the teachings of the Ahlul Bayt. The word ghanimah in the verse under discussion has clearly been interpreted as ‘al-fa’idatu ‘l-muktasabah — the earned profit’ by Imams (Ahele Bait).

“To conclude, we can say that the word ghanima was never treated as being confined to the ‘spoils of war’ by any sect of Islam; and as far as our Imams are concerned, it meant many things besides the spoils of war right from the day of Imam `Ali (peace be upon him), as the authentic traditions show.”2

What has been quoted above can also be substantiated from the practice of the Prophet of Islam himself. For example, when the Prophet sent `Amr bin Hazm to Yemen, he wrote instructions for him in which, among other things, he says, “…to gather the khums of Allah from the gains [of Yemenis].”3

And when the tribe of Bani Kilal of Yemen sent its khums to the Prophet, the latter acknowledges it by saying, “Your messenger has returned and you have paid the khums of Allah from the gains (al-ghana’im).”4

It is interesting to note that the Bani Kilal obeyed the Prophet’s order and sent the khums of its gains to him while no war had taken place between the Muslims of Yemen and the unbelievers. This is a clear indication that khums was not restricted by the Prophet to the spoils of war.

The importance given by the Prophet to the issue of khums can also be seen in his advice to the delegation of Bani `Abdu ‘l-Qays. It seems that Bani `Abdu ‘l-Qays (which was a branch of Rabi`ah) was not a very strong tribe. Moreover, in order to travel to Medina, they had to cross an area inhabited by the Muzar tribe which was against the Muslims. Consequently, the Bani `Abdu ‘l-Qays could not travel safely to Medina except during the months in which war-fare was forbidden according to the Arab custom.

Once a delegation from Bani `Abdu ‘l-Qays came to Medina and said to the Prophet, “We cannot come to you except in the haram months [when war-fare is forbidden], and there are between us and you the unbelievers of Muzar.

Therefore, please give us some advice that we may give to those whom we have left behind and that we may enter the Paradise [by acting on it ourselves].” The Prophet advised them to believe in One God, establish prayer, pay zakat, fast in the month of Ramadhan, and “to pay khums (one-fifth) of whatever you gain.”5

The circumstances of the Bani `Abdu ‘l-Qays — they were weak and small in numbers, and were thus prevented from traveling safely to Medina — leaves no room for interpreting the application of khums in the above hadith on spoils of war exclusively.

Khums is wajib on seven items; but in this book we will discuss only two items:

(1) the profit or surplus of the income, and