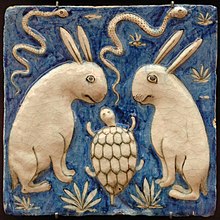 Abu Yahya Zakariya’ ibn Muhammad al-Qazwini (أبو یحیی زکریاء بن محمد القزویني) or Zakarya Qazvini (Persian: زکریا قزوینی) ‎(1203–1283) was a Persian[1][2][3] physician, astronomer, geographer and proto-science fiction writer of Arab descent.[4][5] He belonged to a family of jurists who had long before settled in Qazvin. He was a descendant of the Medinian Sahabi (Companion of the Prophet Muhammad) Anas bin Malik 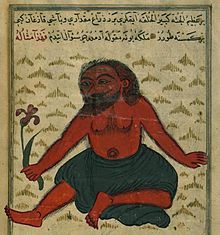 The Monster of Gog and Magog, by Zakariya al-Qazwini

Born in Qazvin, Iran, Zakariya Qazvini served as a legal expert and judge in several localities in Iran and at the city of Baghdad. He travelled around in Mesopotamia and the Levant, and finally entered the circle patronized by the governor of Baghdad, Ata-Malik Juvayni (d. 1283 CE).

It was to the latter that Qazvini dedicated his famous cosmography titled “The Wonders of Creation” (عجائب المخلوقات وغرائب الموجودات, Marvels of Creatures and Strange Things Existing). This treatise, frequently illustrated, was immensely popular and is preserved today in many copies. It was translated into his native Persian language, and later also into Turkish.

Qazvini was also well known for his geographical dictionary “Monument of Places and History of God’s Bondsmen” (آثار البلاد وأخبار العباد). Both of these treatises reflect extensive reading and learning in a wide range of disciplines.

Qazvini mentioned how alchemists dubbed “swindlers” claimed to have carried out the transmutation of metals into gold; he states:

…they ruined the development of the science of chemistry, by fooling powerful rulers such as Imad ad-Din Zengi and thus many scholars and various colleagues turned against alchemy thus resulting in the isolation of the science.[8]

Creatures of the Quran

Creatures of the Quran Creatures of the Quran – domesticated animals: ‘And there is no creature on [or within] the Earth or bird that flies with its wings except [that they are] communities like you. We have not neglected in the Register a thing. Then unto their Lord they will be gathered.” (Quran 6:38) In this […]