Ertugrul ghazi the father of Osman ghazi, the founder of the Osmalı State. Solomon the son of Shaim from the Rock of the Oguzites, which is of the Bozok arm. When Cengiz looted the Islamic country, his father abandoned the country of berber to live on the lands of the Seljuks, passing Amu Deryâ and coming to the Ard basin where the Oghuzes were intense. In the 1220s , he reached the northern border of Horasan, from there to the south of Karakum Gölün, and from there he reached Ahlat through Merv. Suleyman Shah, seeking a more suitable place for the Mongolian fire in the wings of Eastern Anatolia, drowned as he passed through the Euphrates near Ca’ber Fort near Rakka.

After the death of his father, Ertugrul ghazi kabîleye chief was elected. Brothers Sungur Tekin and Gundogdu returned to Ahlat, the barbarian with their associates. Ertugrul ghazi moved his brother Dündar Bey to the west. When they were close to Sivas, they witnessed the battle of Seljukian army and a great Mongol unity. Seeing that the Seljuks were being defeated, Ertugrul ghazi, who ran for their help with their forces, according to the principles of valor and manliness, enabled them to come to power.

Sultan Alaeddin, who was the ruler of the Seljuk State, then sent a blasphemy by complaining Ertugrul Gaza and gave the area of ​​Montenegro near Ankara as the second (1230). Ertugrul Bey, after having stayed here for a while, sent his son, Prosecutor Bey, to Konya and the Domanic Mountains between Bursa and Kütahya were given to them as a spring, Sögüt and Karacaşehir winter. Then Ertugrul came to the barbarian with the Gaza clan, and settled in Willow and Domanic. He lived in the vicinity of the Afşar (or Alishar) and the rashes of the rye suffers the damage suffered. He was careful to get along well with Christian comrades.

There were so many good commutations and aids to the public that even Christian tebea loved and counted herself. Ertugrul ghaziin strengthened from day to day Karacahisar directed Tekfurun to buy himself a facade. Upon this, Ertugrul ghazi went to Konya and encouraged Sultan Alaeddin to conquer these fortresses and came to the fortress and enveloped Karacahisar. On the siege of Mongols Konya Eregli, Sultan Alâdeddin returned. However, Ertugrul ghazi moved to the muhasar. After a while, Ertugrul ghazi, who conquered Kalay, sent Tekfru and other prisoners to Konya with his brother Dündar ghazi to Sultan.

Ertugrul ghazi Selçuklu worked for six years until the death of the Sultan Sultânı Alâddîn with all his efforts for the conquest of etrah and the spread of Islam. After the sultan’s death, he did not mix with the throne and crown battle between the rulers of the Seljuks, and Sögüt moved to the battlefield in the end zone. 1281When he was 92 or 96 years old, he was defeated in Sogut and died there. Ertugrul ghazi assessed the states and political conditions of the states well from the surrounding principals. He lived well with his neighbors and lived in peace and comfort in a powerful state. Ertugrul ghazi, who was very generous, would always help the folks with their fondness. He loved the Christians in the region where he had been ruling for half a century. After the death of Ertugrul ghaziin, his young son Osman ghazi became the reign of the people and tribes. Osman Brain began to spread from the roots of the earth to the earth, which would take the seas, the lands, the continents and the countries among the magnificent branches. So much so that, under the shadow of this tree, all humanity has lived for six full years, after Asr-i Saâdet, never to see and dream again.

Ertugrul is the father of Osman.  With the small part of Kayi tribe, Ertugurl with only 400 tents, went on the challenging path toward the West and made foundation for one of the greatest empires. After Sultan Aleaddin was poisoned by Sadettin Kopek, he revolted against Kopek’s government, and proclaimed his own State,  the City of Sogut its capitol.

His love and respect for his wife was widely known. He had four sons with Halime Sultan, and he died at 90 years old. The last ten years of his life were spent quietly in his tribe, when due to the old age, he transferred all his responsibilities to his youngest son Osman. A historical proof of his life are the coins minted by Osman which identify Ertuğrul as the name of his father, but beyond this not much is known about him apart from folktales.

There is information and historical facts about him that are kept in Turkish archives, within Ibn Arabi’s chronologies, in Western archives about Templars, in Byzantine’s chronologies and in legends – but this information only amounts to around 7 pages of sources according to the actor Engin Altan Duzyatan, who gave life to this great character. Despite this Engin considers it a great privilege to play Ertugrul as he was the first person in Turkish history to move away from the nomadic lifestyle and look to establish a state that went onto last 600 years. 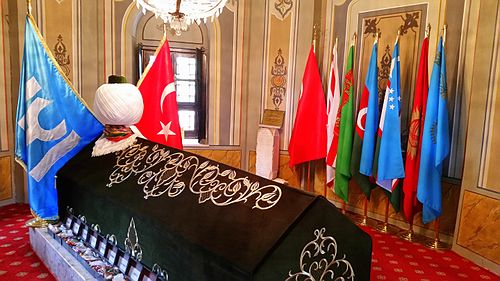 We do know he was buried in Sogut in 1280. Around his tomb are graves of Halime Sultan, Hayme Mother, his sons, Gunduz, Savci Bey, Saru Batu and Osman, his brother Dundar, Turgut Alp, Samsa Alp, Abdurahman, and many others of his Alps, who reached Sogut with Ertugrul Bey. The ones that were not buried there, died along the way.

One of the biggest concern of today’s Youth is Social Media Recognition . We gauge the Importance of a Person by the number of Likes and Follows he has in Social Media . We take Pride in our own Capabilities and we look down upon others . Cyber bullying has increased . We see  a […]