He is known for being the first of the Maragheh astronomers to develop a non-Ptolemaic model of planetary motion. The “Urdi lemma” he developed was later used in the heliocentric Copernican model of Nicolaus Copernicus in the 16th century. 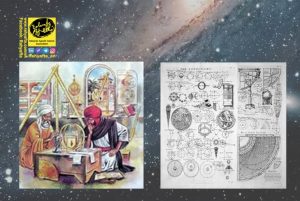 Mu’ayyad al-Din al Urdi is known for being the first of the Maragheh astronomers to develop a non-Ptolemaic model of planetary motion.

Mu’ayyad al-Din al Urdi was an Arab Muslim astronomer, mathematician, architect and engineer working at the Maragheh observatory. He was born  in circa 1200, presumably (from the nisba al‐ʿUrḍī) in the village of ʿUrḍ in the Syrian desert between Palmyra and Resafa, he came to Damascus at some point before 1239, where he worked as an engineer and teacher of geometry, and built instruments for al-Malik al-Mansur of Hims, and later in 1259 moved to Maragheh, Azarbaijan in northwastern Iran, to work at the Maragheh observatory under the guidance of Nasir al-Din Tusi. 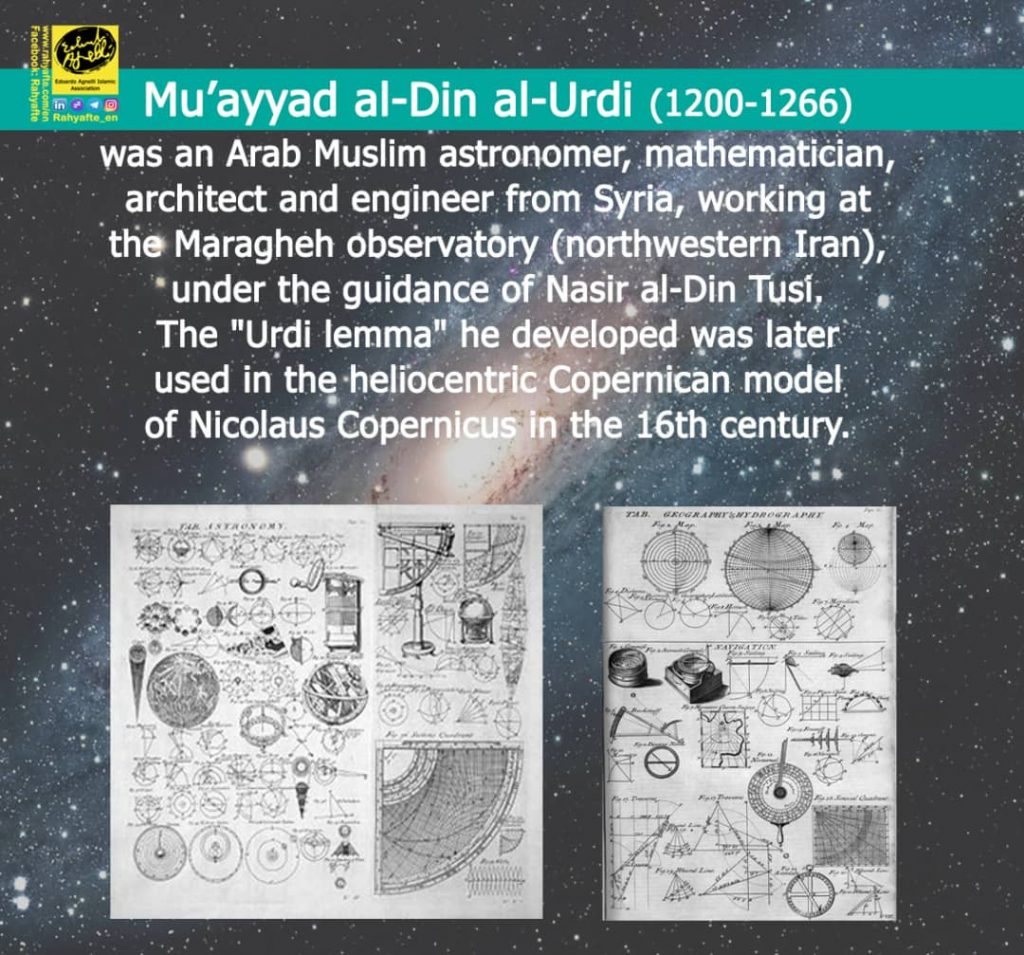 Al-Urdi is a member of the group of Islamic astronomers of the 13th and 14th centuries who were active in the criticism of the astronomical model presented in Ptolemy’s Almagest. professor George Saliba (1979) identified Bodleian ms. Marsh ۶۲۱ as a copy of Al-Urdi’s Kitāb al-Hayʾa, based on which he argued that Al-Urdi’s contributions predated Al-Tusi. Otto E. Neugebauer in 1957 argued that the works of this group of astronomers, perhaps via Ibn al-Shatir, must have been received in 15th-century Europe and ultimately influenced the works of Copernicus. This concerns the “Urdi lemma” in particular, an extension of Apollonius’ theorem that allowed an equant in an astronomic model to be replaced with an equivalent epicycle that moved around a deferent centered at half the distance to the equant point.

Maragheh observatory (Persian:رصدخانه مراغه) is an astronomical observatory which was established in ۱۲۵۹ CE by Nasir al-Din al-Tusi, an Iranian scientist and astronomer. Located in the heights west of Maragheh, East Azarbaijan province, Iran, it was once considered one of the most prestigious observatories in the world.

Al-Urdi’s Article on ‘The Quality of Observation’

Astronomy has for a long time been of keen interest of Muslims throughout centuries. This article by Professor Sevim Tekeli highlights the quality and precision of observations made by al-Urdi….

This article includes the critical edition and the translation of the Risala fî kayfiya al-arsâd wa ma yuhtaja ilâ llmihi wa amalihi min turuq al-muwaddiya ild marifa’auddt al-kawakib (The treatise on the quality of the observations and the theoretical and practical knowledge needed to make them, and the methods leading to understanding of the regularities of the stars) of Al-Urdî. It gives us a whole description of the instruments of the Maragha Observatory that was constructed by Nasir al-Din al-Tûsî in 1261 under the auspices of Hulagu. Only at the time of Tycho Brahe (in 16th century) did the instruments in Europe become as perfect and precise as the instruments constructed in the Maragha Observatory.

Al-‘Urdî is a Syrian architect. He constructed the water installations of Damascus. He has also constructed astronomical instruments for Al-Mansur, the ruler of Hims. After 1259, he worked in cooperation with Nasir al-Din al-Tûsî.

We could clearly see from the descriptions given in this article that the construction of the instruments and their formations were done with great care in order to have accurate results.

An incomplete French translation of this article was made by Amabl Jourdain (in 1909) in Mémoire sur L’observatoire de Meragah et sur quelques instruments emploiyés poury observer. In 1928, it was translated into German by Hugo Seemann as Die
Instrumente der Sternwarte zu Maragha nach den Mitteilungen von Al- Urdî. This German translation is quite complete. Though it is one of the fundamental books in Islamic Astronomy, its text has not been published up to now. The text herein is the comparison of the three manuscripts. Two of these three copies are in Istanbul and the other one is in Paris.

Though the date of the transcription has not been indicated in the manuscripts we can easily deduce from the information given in the text that it has been written after the construction of the Maragha Observatory and before the death of Nasir al-Din Tûsî. In the text, the date of the construction of the instruments is given as 1261/2. Since Nasir al-Din Tûsî died in 1274, we can estimate easily that the manuscript was transcribed between 1262 and 1274. However, since Al-‘Urdî indicates that some of the models of the instruments have already been constructed but without saying whether they have been constructed in the Observatory or not, we can make our estimations further than 1274.

According to the grammar rules, it is necessary to accord the verbs but in addition, accords were made in the kind and number of verbs, when this is not conational in order to provide precision and these changes are indicated with notes. The errors thus made in the dictation are different in the manuscripts but still these changes do not require any corrections.

ʿUrḍī was one of the major figures of Islamic astronomy in the 13th century, and participated in a number of important scientific innovations and developments. Sometime before 1239, ʿUrḍī moved to Damascus, where he worked as an engineer, a teacher of geometry. and, possibly, of astronomy as well. In 1252/1253, as he says in his Risālat al‐Raṣd, he built the socalled perfect instrument for al‐Malik al‐Manṣūr, Lord of Ḥimṣ. In the 1250s Naṣīr al‐Dīn al‐Ṭūsī asked him to come to Marāgha in Azerbaijān (now in northwest Iran) to help in the building of an observatory under the patronage of the Mongol ruler Hülegü. The observatory, one of the most important ever built in the Islamic world and arguably the first full‐scale observatory in the modern sense, was founded in 1259, and ʿUrḍī arrived in Marāgha in that year (or shortly before). He took part in building the observatory outside the city and erected special devices and water wheels to raise the water to the observatory hill; he also participated in the construction of a mosque and a special building for Hülegü’s residence. At the observatory in Marāgha, ʿUrḍī probably joined in the observations for Ṭūsī’s Īlkhānī Zīj and was mentioned in this treatise. Though a noted astronomer and instrument maker, his participation in the observatory was limited to its early years, in as much as he constructed instruments there only before 1261/1262. Several instruments for which ʿUrḍī tells us he prepared models were actually seen by later visitors, further suggesting that he was not the only instrument maker at Marāgha. His son Muḥammad, also a member of the observatory staff, made a copy of his father’s Kitāb al‐Hayʾa and constructed a celestial globe, now preserved in Dresden, which was used at the observatory. ʿUrḍī, as well as Ṭūsī, was a member of the so called School of Marāgha, which also included Quṭb al‐Dīn al‐Shīrāzi and a number of other astronomers.

ʿUrḍī’s Kitāb al‐Hayʾa, written sometime before ʿUrḍī reached Marāgha in 1259, is a work on theoretical astronomy that includes a critique of Ptolemy’s Almagest and his Planetary Hypotheses. There exist two versions of ʿUrḍī’s treatise: an earlier one compiled sometime between 1235 and 1245 and a later version in which he edited whole chapters of his original text to make the arguments more consistent. In the Kitāb al‐Hayʾa ʿUrḍī introduces the reader to Ptolemaic astronomy and then explains the difficulties arising from some of Ptolemy’s methods and techniques. He then presents his own astronomical models as an alternative. For ʿUrḍī, as well as for other astronomers of the so called School of Marāgha, the main problem in Ptolemaic astronomy was the lack of consistency between the mathematical models and the principles of natural philosophy. Examples occurred in the prosneusis point for the Moon, the deferent in the lunar model, the equant in the model for the superior planets, the inconsistencies in the planetary distances, and the inclination and deviation of the spheres of Mercury and Venus that were meant to account for latitude. In ʿUrḍī’s opinion, these inconsistencies violated the essential consistency between the theoretical mathematical models and the accepted natural and physical axioms. ʿUrḍī held to the basic principles of Greek astronomy, especially the circular and uniform motion of the heavenly bodies, and the Earth as the unmovable center of the Universe; he also appreciated the validity of the Ptolemaic planetary observations as quoted in the Almagest. But he objected to the mathematical models that Ptolemy had devised to describe the motions of the planets. ʿUrḍī tried to find astronomical models that would preserve Ptolemy’s observations, and which would also be consistent mathematically as well as physically. To this end, he devised the ʿUrḍī lemma, a developed form of the theorem by Apollonius that transformed eccentric models into epicyclic ones. ʿUrḍī stated that if we construct two equal lines on the same side of any straight line so that they make two equal angles with that straight line, be they corresponding or interior, and if their endpoints are connected, then the line resulting from connecting them will be parallel to the line upon which they were erected (Kitāb al‐Hayʾa, p. 220). The new technique of bisecting the Ptolemaic eccentricity allowed him to preserve Ptolemy’s deferent, while preserving the uniform, circular motions of the celestial orbs that revolve on their own centers, thus avoiding the apparent contradictions in Ptolemy’s model. ʿUrḍī’s Kitāb al‐Hayʾa was written within a tradition of astronomical literature that was critical of Ptolemy, but it apparently did not depend upon the work of Ṭūsī, who also presented alternative models in several of his works (many of which were based upon the Ṭūsī couple that transforms circular motion into linear motion). ʿUrḍī’s work was quoted by Ibn al‐Shāṭir, and influenced Bar Hebraeus and Quṭb al‐Dīn al‐Shīrāzī. Furthermore, there are many similarities to Nicholaus Copernicus‘s work. ʿUrḍī’s technical alternative to Ptolemy’s model for the upper planets is essentially the same as that in Copernicus’s De revolutionibus.

ʿUrḍī also wrote some minor treatises: a commentary on Kharaqī‘s astronomical treatise Kitāb al‐Tabṣira fī ʿilm al‐hayʾa, that closely follows Kharaqī’s wording (extant in a unique manuscript in Madrid); a supplement to a problem in the Almagest, probably preserved in Mashhad and Ankara; a short treatise on the determination of the solar eccentricity, preserved in Ankara and Istanbul; and a Risālat al‐ʿAmal fī al‐kura al‐kāmila on the armillary sphere, mentioned in ʿUrḍī’s Risālat al‐Raṣd as well as in his Kitāb al‐Hayʾa, which seems no longer extant. In addition, ʿUrḍī himself, or his son, copied in 1252/1253 the recension of the Almagest by Ṭūsī, which is preserved in Cairo.

Both of ʿUrḍī’s main works, the Risālat al‐Raṣd and the Kitāb al‐Hayʾa, are characterized by improvement and refinement. On the one hand, he tried to make precise instruments – some standard, others of his own invention – that would result in the best observations possible. The Risālat al‐Raṣd gives the reader a rare insight into the equipment of a medieval Islamic observatory. On the other hand, he attempted to make the Ptolemaic astronomy more consistent by developing new and highly sophisticated planetary theories, some of them mathematically identical to Copernicus’s non‐Ptolemaic models.

Imam Ali quotes in Morals and General Words of Wisdom

Sayyiduna Usayd (radi Allahu ta’ala ‘anhu) narrates: The beloved Prophet of Allah (Salla Llahu ‘alayhi wa sallam) placed his sacred hands on the companion’s chest and rubbed them over his face. After that, whenever the companion (radi Allahu ta’ala ‘anhu) would enter a dark house it would lighten up. [Imam Nabhani, Hujjatullah ‘Ala al-‘Aalameen, Page […]

The Story of Mathematics