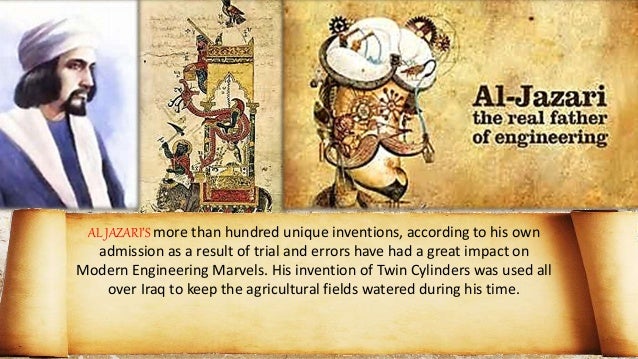 Al-Jazari was the most outstanding mechanical engineer of his time. His full name was Badi’ al-Zaman Abu-‘l-‘Izz Ibn Isma’il Ibn al-Razzaz al-Jazari. He lived in Diyar-Bakir (in Turkey) during the 6th century H (late 12th century-early 13th century CE).

The only biographical information known about him is contained in his famed Book of Knowledge of Ingenious Mechanical Devices.[3] Like his father before him, he served as chief engineer at the Artuklu Palace, the residence of the Mardin branch of the Artuqids which ruled across eastern Anatolia as vassals of the Zengid dynasty of Mosul and later of Ayyubid general Saladin.[4]

Al-Jazari was part of a tradition of artisans and was thus more a practical engineer than an inventor[5] who appears to have been “more interested in the craftsmanship necessary to construct the devices than in the technology which lay behind them” and his machines were usually “assembled by trial and error rather than by theoretical calculation.”[6] His Book of Knowledge of Ingenious Mechanical Devicesappears to have been quite popular as it appears in a large number of manuscript copies, and as he explains repeatedly, he only describes devices he has built himself. According to Mayr, the book’s style resembles that of a modern “do-it-yourself” book.[7]

Some of his devices were inspired by earlier devices, such as one of his monumental water clocks, which was based on that of a Pseudo-Archimedes.[8] He also cites the influence of the Banū Mūsā brothers for his fountains, al-Saghani for the design of a candle clock, and Hibatullah ibn al-Husayn (d. 1139) for musical automata. Al-Jazari goes on to describe the improvements he made to the work of his predecessors, and describes a number of devices, techniques and components that are original innovations which do not appear in the works by his precessors.[9]

He was called Al-Jazari after the place of his birth, Al-Jazira, the area lying between the Tigris and the Euphrates in Mesopotamia. Like his father before him, he served the Artuqid kings of Diyar-Bakir for several decades (at least between 570 and 597 H/1174-1200 CE) as a mechanical engineer. In 1206, he completed an outstanding book on engineering entitled Al-Jami’ bayn al-‘ilm wa-‘l-‘amal al-nafi’ fi sinat’at al-hiyal in Arabic. It was a compendium of theoretical and practical mechanics. George Sarton writes: “This treatise is the most elaborate of its kind and may be considered the climax of this line of Muslim achievement” (Introduction to the History of Science, 1927, vol. 2, p. 510).

Al-Jazari’s book is distinctive in its practical aspect because the author was a competent engineer and skilled craftsman. The book describes various devices in minute detail, providing hence an invaluable contribution in the history of engineering. British charter engineer and historian of Islamic technology Donald R. Hill (1974) who held a special interest in Al-Jazari’s achievements wrote:

“It is impossible to over emphasize the importance of Al-Jazari’s work in the history of engineering, it provides a wealth of instructions for design, manufacture and assembly of machines.”

Donald R. Hill translated into English Al-Jazari’s book in 1974, seven centuries and 68 years after it was completed by its author. Al-Jazari’s encyclopedic treatise includes six main categories of machines and devices. Several of the machines, mechanisms and techniques first appear in this treatise, later entering the vocabulary of European mechanical engineering. Among these innovations, we mention the double acting pumps with suction pipes, the use of a crank shaft in a machine, accurate calibration of orifices, lamination of timber to reduce warping, static balancing of wheels, use of paper models to establish a design, casting of metals in closed mould boxes with green sand, etc. Al-Jazari also describes methods of construction and assembly in scrupulous detail of the fifty machines to enable future craftsmen to reconstruct them.

And he was successful in that, for many of his devices were constructed following his instructions. The work by Al-Jazari is also unique in the way that other writers often fail to give sufficient details, because – amongst other factors – they were not craftsmen themselves, or kept their secrets, or if they were craftsmen, they could have been illiterate. Al-Jazari in this respect was unique, and this gives his work immense value. His book, Hill states, is an absolute wealth of Islamic mechanical engineering.

In their paper on “Mechanical Engineering during the Early Islamic Period” (published in I. Mech. E, The Chartered Mechanical Engineer, 1978, pp. 79-83), C. G. Ludlow and A. S. Bahrani have raised the important point that it is more than likely that there is more on the subject in some of the thousands of Arabic manuscripts in the world libraries which have not yet been inspected closely, and obviously require looking into.

Hill, too, constantly raises the two major issues with respect to the history of engineering in general, and that of fine technology in particular. He first states the fact that the field, which is absolutely immense, is yet largely unexplored.

The other issue is related to fine technology. One of his concluding points states that “it is hoped that, as research proceeds, firmer evidence for the transmission of Islamic fine technology into Europe can be provided.” Hill also offers some hints for such transmission. The most likely route was Spain. Such fine technology could have followed the same route as the astrolabe (itself part of this fine technology.) Apart from Spain, there were other possible lands of transfer: Sicily, Southern France, Italy, Byzantium and Syria during the Crusades. Hill is also right on a further account, that what will be seen in this work is just a fraction of the whole process, which, as with much else has hardly been explored.

The animation presented in figure 7 shows a virtual model of one of Al-Jazari’s water raising pumps. The details of this unique pump were obtained from his manuscript and Hill’s diagrams. We see two suction pumps in synchronous motion driven by a paddle wheel, which is driven by a water stream.

The other animation is for a 3D model recreated from the description of the elephant clock as described by Al-Jazari (see below fig. 9). Full details of this animation are given in the works authored by the author and his collaborators published in the book 1001 Inventions: The Muslim Heritage in Our World (chief editor Salim al-Hassani, Manchester: FSTC, 2006) and in articles that can be consulted online on