WHO WAS THE FATHER OF PROPHET IBRAHIM? 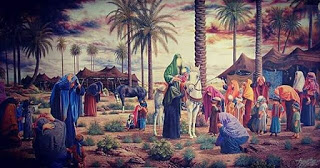 It has been widely circulated now a days that the father of Prophet Ibrahim عليه سلام was a disbeliever. For those who believe this, have a little knowledge of the Quran, its exegesis and the Arabic language. In this article, we shall discuss Who was the real father of Prophet Abraham and also critically analyze the “proofs” brought forth by the ones who say otherwise.

It is mentioned in the Quran, Surah Anam, Verse 74

“Remember when Abraham said to his father, Azar, “How can you take idols as gods? I see that you and your people have clearly gone astray.”

In this verse, Allah tells His Messenger صلى الله عليه وسلم to remember when the Prophet Ibrahim inquired (speculatively) his “Abih” that he takes idols as his Gods?

Now, the word “Abih” is under dispute here. In Arabic, this word has many other meanings, one of them being “Father”. The other meanings include “Guardian”, “Patron” or a “Patriarch” etc. In the Quran, 2:113, Allah has addressed Prophet Ismail عليه سلام as the “Abih” of Prophet Yaqub عليه سلام. We all know that Prophet Ismail was not the biological father of Prophet Yaqub but he was his uncle. See Scans below

If the word “Abih” is literally understood as “Father”, then it goes against a verse of the Quran and Many Hadith. Allah says in Surah Ash-Shura, Verse 219,

“And your movement among those who prostrate.”

Ibn Abbas and Al Suyuti has recorded in their exegesis that it means ” and your (Muhammad’s) movements — in [performing] the [various] parts of prayer: standing, sitting, bowing and

prostrating — from (the lions of) those who prostrate, those who perform the prayers.

This verse, without any doubt proves that the ancestors of Prophet Muhammad صلىالله عليه وسلم including Ibrahim عليه سلام and His Father were believers and Obedient to Allah.

“Without further reference and unpunctuated that verse i.e Al Quran, 6:74, permits a number of possible readings, the most obvious of which will take the word Azar to be the name of Abraham’s father. But it was known from other narratives (historians. story-tellers, the Bible) that Abraham’s father was called Terah (so in the English Bible; the Arabic versions were Tarah or Tarakh).” He also writes,”Al Qurtubi began his commentary with a citation from Muhammad bin Muhammad al‘ Juwayni who claimed that there was no dispute (ikhtilaf) on the name of Abraham’s father, which was Terah”.

Al Tabari in his History, English Ed, Vol 2, The Prophets and Patriarchs”, in the chapter, “Discussion of Abraham, the Friend of the Merciful”, Pg 48, has mentioned the total lineage of Prophet Ibrahim عليه سلام as “Abraham b. Terah b. Nahor b . Serug b. Reu b. Peleg b. Eber b. Shelah b . Qaynan b. Arpachshad b. Shem b. Noah.”

It can be clearly seen that the father of Prophet Ibrahim was Terah and not Azar. Some say that the word “Azar” means idols, so that the verse is understood as, “Abraham said to his father, Do you take Azar as your idol.” Some also say that the Father of the Prophet Ibrahim was given the name “Azar” after he rejected the Prophets message, but both of these exegesis lacks evidence. Hence the correct one is the above stated

Women in Islam Versus Women in the Judaeo-Christian Tradition

INTRODUCTION Five years ago, I read in the Toronto Star issue of July 3, 1990 an article titled “Islam is not alone in patriarchal doctrines”, by Gwynne Dyer. The article described the furious reactions of the participants of a conference on women and power held in Montreal to the comments of the famous Egyptian feminist […]

Ibn Khaldun: Studies on His Contribution in Economy

“When civilization [population] increases, the available labor again increases. In turn, luxury again increases in correspondence with the increasing profit, and the customs and needs of luxury increase. Crafts are created to obtain luxury products. The value realized from them increases, and, as a result, profits are again multiplied in the town. Production there is […]