Hazrat Syed Inkeshafali  Sahib’s  shrine and tomb are  one of the most popular religious places in Karimnagar district , and which are visited by people of all religions  alike by both the Muslims and Hindus. Bijgir Sharif Dargah is one of Telangana’s most famous and prestigious landmarks situated nearby to Jammikunta Mandal railway station lying about 62 kms to the east of Karimnagar.

This village is a prehistoric site containing Megalithic burials. Once the name of the village was Vijayagiri which is now called Bijgir consisting of mounts or the hills and hillocks in its surroundings. There are steps to reach the old Narasimha temple and Hanuman temple lying on a nearby hill.

Today the village Bijgir Sharif is very popular because of the location of the Dargah of Hazrat Syed Inkeshafali  Sahib and which used to be visited on the daily basis  by both the Muslims and Hindus alike with great reverence and devotion in a large number. There are four beautiful gateways on four sides of this tomb. The big dome and  on the tomb is a splendid attraction of this beautiful edifice.

The tomb of Azmatshah Wali (brother of Inkeshah Wali) Sahib and the tombs of their sons MurtazashahWali and  Akbarshah Wali is  also  to be found in the same mausoleum.

The tomb of Hazrat Syed Afzal Amma Bi, wife of the holy saint Inkeshahfali Sahib  is  located very near to the main Dargah. The peaceful atmosphere and the beautiful natural surroundings of this place tend to the growth of pure and serene thoughts of spiritualism. This holy Dargah with four gateways in the shape of arches surrounded by hills and hillocks filled with thousands of pigeons found in large groups attract the devotees from various places.

This Dargah stands as a symbol of communal harmony as the Hindu  and Muslim visitors are found in large numbers. It is reported that this Dargah is eight centuries old.

  In the month of Bakrid especially at the festival time, the Neem tree which is to be found  next to Dargah becomes as sweet as sugar.

  Dargah Shareef is famous for its spring of water where water flows throughout the year.

  The Spring water changes into three types of different colours in a year at Bijgir Sharif Dargah.

  Water in the well contains two different types of waters the half part is sweet whereas another part is salty.

  Pachisi (Chess) played by Narsimha Swamy and Hazrath Inkushafali  Sahib is still to be found  at Bijgiri Sharif.

  Long  time ago thieves had tried to steal a gold chain which is offered by a devotee. When the thieves tried to steal the chain but  the golden chain gone upside of Dargah with the miracle of Hazrat Syed Inkeshafali  Sahib of Bijgir Sharif Dargah and it’s still  to be found now at that place only.

  Bijgir Sharif Dargah visited by many devotees such as Hindus And Muslims Alike. 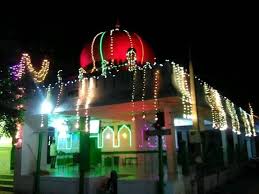 On the occasion of the annual Urs (death anniversary) celebrated in connection with the Muslim festival of the Bakrid,  and at that time thousands of people from far off place participate in it to offer their prayers in the Dargah.

People from various walks of life, irrespective of caste and creed, assemble to celebrate the Urs (death anniversary) which takes place on the 10, 11 and 12 days of Zil Haj of Muslim calendar at the famous   shrine (Dargah) Hazrat Syed Inkeshafali  Sahib in Bijgir Sharif every year. Several hundred thousand devotees from near and far, irrespective of religion and beliefs, gather  there to seek blessings.

For a long time he was engaged in religious discourses, sermons, and spiritual training of the people and he  did also many great endeavours for the preaching and propagation work of Islam in Deccan  (South India) and around this region and there was no such personality during  his time.