Abdul Qadir ibn Muhieddine al-Hasani was born 6 September 1808 in Algeria and died 26 May 1883 in Damascus. He was the fourth son of Muhieddine al-Hasani, which indicates that his family were descendants of Hazrat Hasan ibn Ali a.s, the grandson of the Prophet Muhammad ﷺ .

Abdelkader ibn Muhieddine (6 September 1808 – 26 May 1883; Arabic: عبد القادر ابن محيي الدين‎ ʿAbd al-Qādir ibn Muḥyiddīn), known as the Emir Abdelkader or Abdelkader El Djezairi, was an Algerian religious and military leader who led a struggle against the French colonial invasion in the mid-19th century. An Islamic scholar and Sufi who unexpectedly found himself leading a military campaign, he built up a collection of Algerian tribesmen that for many years successfully held out against one of the most advanced armies in Europe. His consistent regard for what would now be called human rights, especially as regards his Christian opponents, drew widespread admiration, and a crucial intervention to save the Christian community of Damascus from a massacre in 1860 brought honours and awards from around the world. Within Algeria, his efforts to unite the country against foreign invaders saw him hailed as the “modern Jugurtha”[2] and his ability to combine religious and political authority has led to his being acclaimed as the “Saint among the Princes, the Prince among the Saints”.

Abdelkader was born near the town of Mascara in 1808, to a family of religious belief. His father, Muhieddine (or “Muhyi al-Din”) al-Hasani, was a muqaddam in a religious institution affiliated with the Qadiriyya Sufi order of Islam[5] and claimed descendance from Prophet Muhammad ﷺ, through the Idrisids. Abdelkader was thus a sharif, and entitled to add the honorary patronymic al-Hasani (“descendant of al-Hasan”) to his name.

He grew up in his father’s zawiya, which by the early nineteenth century had become the centre of a thriving community on the banks of the Oued al-Hammam river. Like other students, he received a traditional education in theology, jurisprudence and grammar; it was said that he could read and write by the age of five. A gifted student, Abdelkader succeeded in reciting the Qur’an by heart at the age of 14, thereby receiving the title of hafiz; a year later, he went to Oran for further education.He was a good orator and could excite his peers with poetry and religious diatribes.

In 1825, he set out on the Hajj, the Muslim pilgrimage to Mecca, with his father. While there, he encountered Imam Shamil; the two spoke at length on different topics. He also traveled to Damascus and Baghdad, and visited the graves of noted Muslims, such as Shaykh Ibn Arabiand Sidi Abd-el-Kader El Jilani named also El-Jilali in Algeria. This experience cemented his religious enthusiasm. On his way back to Algeria, he was impressed by the reforms carried out by Muhammad Ali in Egypt.He returned to his homeland a few months before the arrival of the French. 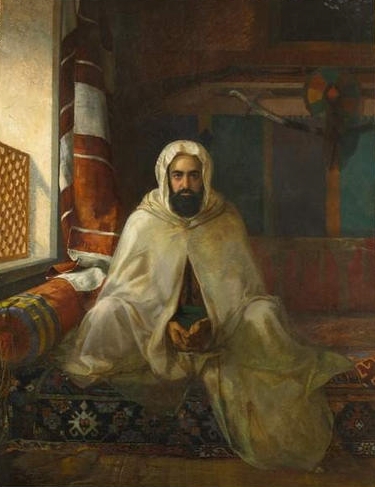 His military prowess was acknowledged and admired among his peers, he was also known to be a religious and elegant man who had the ability to motivate his peers with oratorical eloquence. Abdul Qadir  grew up to succeed his father to become the religious and military leader of Algeria and lead the rebellion against the French invaders in the 19th century.

He grew up in his father’s school, that had become the centre of a thriving community, he received a traditional educational in theology, jurisprudence and grammar, he was able to read and write by the age of five. He was considered a gifted student and was able to recite the Qur’an by heart, at the age of 14, giving him the honorable title of hafiz. 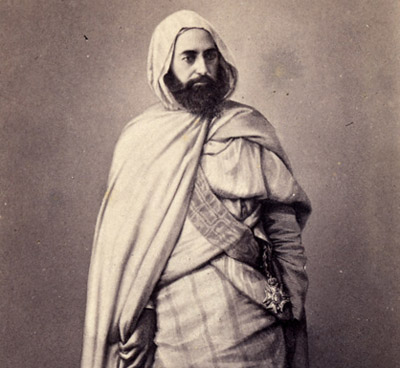 In 1825, Abdul Qadir and his father set out on Hajj, while there he encountered another great leader that help create change rebelled against a group of oppressors, Imam Shamil. They became friends, and discussed a variety of topics.

In 1832, he was elected as leader of the Algerian army after succeeding his father, who had refused the position due to his old age. He continued to represent the Algerian army as they fought French invaders in the following years.

Within two years of his leadership, Abdul Qadir was able to unify Algerian tribes and re-establish security throughout the region.

Abdul Qadir was known to emphasise the importance of Islam as a unifying factor amongst his people. Islam was the bedrock of his army and Abdul Qadir’s most powerful means of strength. Despite his adherence to Islam, it did not restrict him from engaging with and employing Jews and Christians to help build his nation. He opened arsenals, warehouses and workshops to support his people and he also organised fixed salaries for all his administration.

He was well known for his simplicity amongst his people and was known to humbly live in a tent.

In a bid to suppress Abdul Qadir’s ongoing victories, the French thus decided to engage in a peace treaty with him. This, however, went to the advantage of Abdul Qadir, and consequently gave him time to expand on his territory. 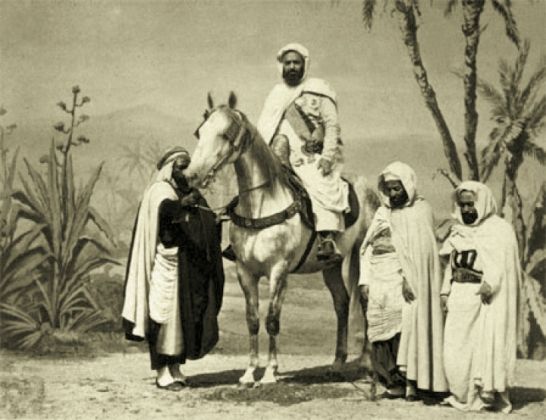 Following subsequent losses to the French Army, the new Governor General of France was appointed in a bid to finally overthrow Abdul Qadir.

The war lasted for seven years and in 1847 Abdul Qadir finally surrendered.

He was thus sent to France where he was held captive.

However after Napoleon Bonaparte became President, he freed Abdul Qadir, and allowed him to move to Damascus, Syria.

While he lived in Damascus, a conflict between the Druze and Christians soon erupted. Realising the imminent threat, Abdul Qadir took it upon himself to shelter many Christians. This included a large Christian religious group known as the Sisters of Mercy. Abdul Qadir even sent his eldest sons out on the streets to invite those at risk into his protection.

When Abdul Qadir was asked why he would do such a thing, after the French Christians had done so much to harm him, he responded that it was in accordance with the teachings of the Prophet Muhammad ﷺ.

News of Abdul Qadir’s noble action soon spread far and wide, and he soon found himself subject to the praise of many in Europe and across the Western World. He was hailed around the world as a hero and soon became known as the most loved enemy of France.

The Prophet (ﷺ) said, “Whoever killed a Mu’ahid (a person who is granted the pledge of protection by the Muslims) shall not smell the fragrance of Paradise though its fragrance can be smelt at a distance of forty years (of traveling).
May Allah have mercy on Abdul Qadir

And grant him the highest station in Paradise.