He was among truthful persons of his  time  and  due  to piety and sanctity he was perfect to find out the defects of the soul. The people used to say  him spiritualist of the kingdom. A famous pious person Abul Khair was his disciple. He used to say that if the people ask you do you know Allah then do not tell them that you know Allah but say them that due to grace of Allah  we  have  got knowledge of Allah. He told “To follow amiability  of Allah otherwise we will suffer worries and problems always.” If Allah wants good for somebody then he will transfer the perfect knowledge into his heart and mind and then He will seizure all organs towards him and annihilate them so  that in such annihilation there will be manifestation of Allah’s personality.

told “All creations  will demand the freedom from Allah

but he will demand the slavery from Him because  the safety of the man lies in the slavery and one who demands for the freedom then he will kill himself.

The difference between us is that I submit my wishes to Allah and you all will submit your wishes to him and you see me and hear me but I will see Him and hear Him and as a matter of fact I and you are all same and there is no difference at all.

He told the master is like a mirror for the disciple and in such a mirror disciple can look as per the light of teaching of his master and the company of master is better than 100 nafil (supererogatory) prayers.” He told “It is better to eat one bite less at the time of hunger than love of the people of world. The people of world who think for honor and respect and such things are nothing and useless in the another world.” He told “The Sufi or Pious person will desire for some thing  or position but he does  not  want such things or any position because he desires from Allah to keep him away from egotism.”

He told Allah is free from the following things.”

He told “Do not think that the last holy prophet is not living in his mausoleum because you  are  dead  so  your eyes could not see him.” He told ” Allah created such persons in the world who left worldly peace and pleasure for the peoples of the world and also they left peace and pleasure of another world for the pious persons and so in this way such persons left all things except Him and they are proud for this matter that Allah granted them status of servitude in His court of providence and so in this way Allah granted honor to his slaves for this reason.” He told “Until there will be problems of me and you are there then there will be insinuation and worship will be appear. If such differences will be over then insinuation and worship will disappear automatically.” He told “Those who know Allah well will not have courage to say by themselves that they are persons who know Allah.”

He told ” Through out day and night in which the grace of Allah will fall on the mankind.  Those  who  demand other things other than Allah are such persons who worship two gods.”

He told “He does not want respect from others because it is like an immature mother who will demand respect from her young sons and daughters.”

He told “The Satan is rejected by Allah and to stoning him is an act of courage and bravery.” He told “On the Day of Judgement if Allah will hand over all accounts of the mankind to him then he will leave the mankind un- accounted and will settle all accounts with the Satan but I

know that this is not possible.”

He  told  ”  Mankind  did  not  know  his  status  because everybody  will  look  at  him  as  per  his  own  status  and conditions so they think me as equal to them and they also think his status and their status will be same and equal.”  He told “His presence in the world is a matter of pride for prophet Adam (peace be upon him) and also for the cooling  of  the  eyes  of  last  holy  prophet  of  Allah.  Its meaning is that on the Day of Judgement prophet Adam (peace be upon him) will be pride of him as he belongs to his generation and also it will be a matter of cooling for the  eyes  of  last  prophet  of  Allah  as  he  is  among  his Ummat (nation).”

He told “On the Day of Judgement his flag will be bigger than all other flags and unless all prophets from prophet Adam (peace be upon him) to prophet Moses (peace be upon him) will not come under his flag, he will not agree in this matter.” The author of the book says that  this saying is similar to the saying of Bayazid Bustami which is available in the book that his flag is bigger than the flag of prophet Moses (peace be upon him). He told “My asceticism’s lowest status is that if he took the spade in his hand and strikes on the sea of invisible then every thing from empyrean to nether regions will be destroyed and if he strikes second time with the spade then nothing will be survived.” Its meaning is that in his first attempt all things will be removed which were in front of him. He told “On the Day of Judgement Allah will send one group of persons to the heaven and another group of persons to the

hell and then He will drown both of them in the river of invisible.”

No body can reach the place where Allah lives except the souls. Some persons asked him on the Day of Judgement when all persons will be sent to the heaven and hell then where the courageous persons will go? And for this he replied that for them there is no place in both the worlds. Some body saw the Day of Judgement in his dream and searched for him in many places but he could not find him there. So that person upon his awakening  of  his  dream went to  see him and  explained the details of his dream then he told him “How you will find a person who did not exist there? Because I used to pray Allah  that  nobody could find him on the Day of Judgement.”

Its meaning is that Allah will conceal him in such a way that no body could see him there except Allah.

Once he was praying in a lonely place and at that time Muezzin (one who shouts the call to prayer) called in the mosque (Qad Qamatis- Salat) and its meaning is “Stand for  prayer”,  and  upon  hearing  this  call  he  told  “It  is

for the prayer”. But he thought again about the Islamic Shariah law and went to the mosque for the congressional prayer. 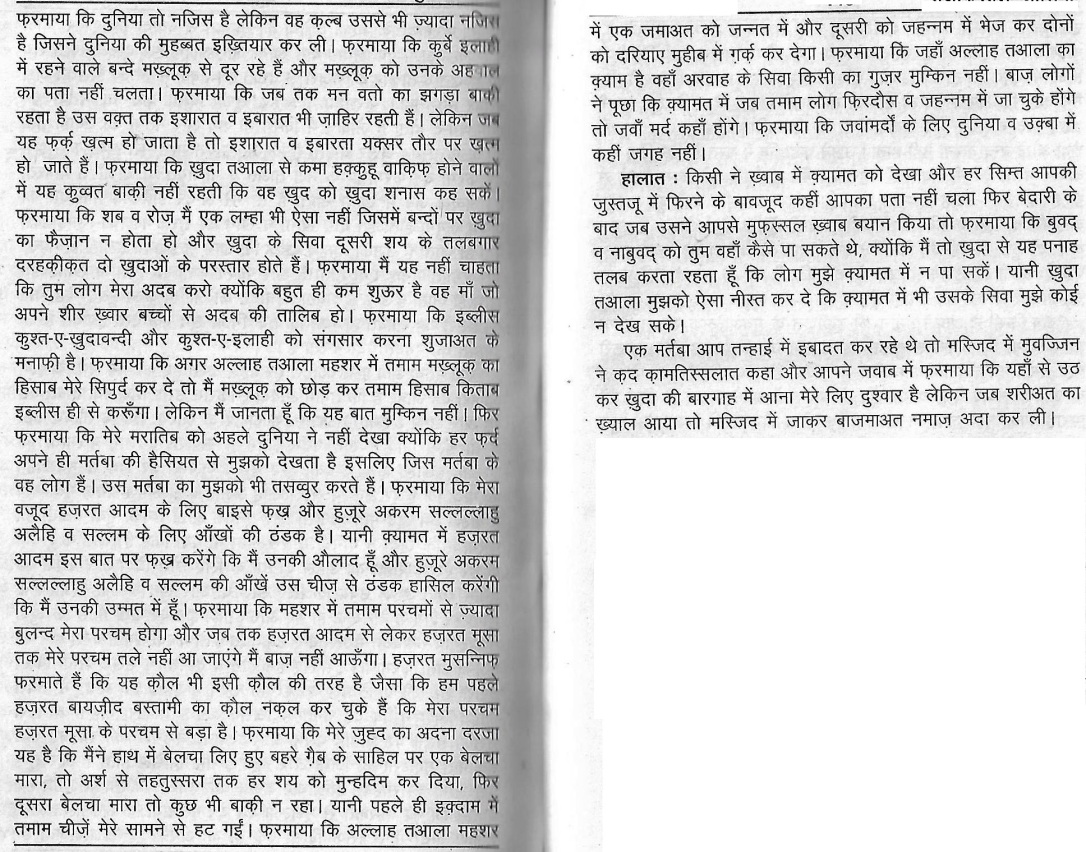