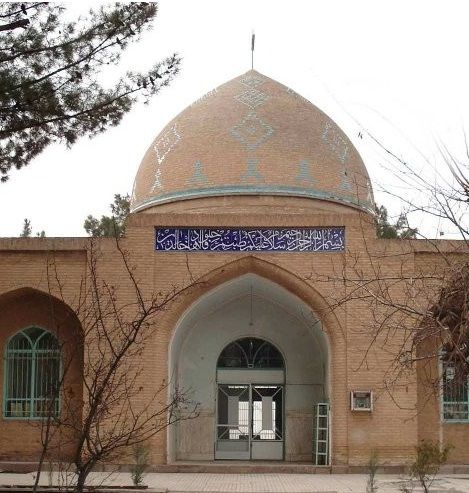 Abu Usman Saeed Bin Salam al maghribi (Persian: ابو عثمان‎مغربی) was an Egyptian Sufi scholar of the Kubruwi Order.He was instructed in Sufism by Abu Ali katib. He died at the age of 130 and was buried in Neshabur, Iran

He  was  famous  a  saint  with  great  source  of  truth  and events  and  also  famous  for  his  miracles  and  mystical exercises.  He  was  custodian  of  holy  Harem  Makkah (Grand  mosque  in  Makkah)  for  long  time.  He  died  at Neshapur at the age of 130 years. In his early life he has spent period of 30 years in the loneliness in the deserts. Due to his hard worship and meditation his body’s flesh was  melted  and  the  circles  were  developed  around  his eyes and due to this reason his face turned into dangerous figure.  During  that  period  he  has  received  revelation  in which he was told to contact the creations. So he reached Makkah from the desert and upon his arrival from there the Shaikhs of Makkah welcomed him wholeheartedly. Upon looking his bad condition of the body they told him that  “As  you  have  spent  20  years  in  the  desert  in  the loneliness and no person could spent such life in the desert and for this reason you are ahead of all other persons in this matter so tell us what did you have gained from your stay in  the  desert  and  why  did  you  returned  back  from there”.

(intoxication) so returned back from there

hopelessly and without any result as I went there  in search of such reality but I could not get it there”. At that time he heard a divine call in which it was told that “Oh Abu Osman in (Faroat) the subsidiary elements think of intoxication and to find the right way towards Allah is not easy because the totality of all things possessing actuality, existence, or essence are in Our hands.” So when I heard this, I returned back from there helplessly. When the Shaikhs heard his sayings they told them that “You have fulfilled your duty so it is not good now for  another person to describe about Sukr (intoxication) (the state of being transported by a lofty emotion or ecstasy) and reality.”

He told “In the beginning of endeavor my condition was such that I used to be thrown from the sky to down then I was in happy in that condition as I was in the problem whether to eat food or to do ablution for obligatory prayer. Due to these two problems I had lost my pleasure of meditation which was very troublesome for me.

During the condition of meditation there were revelations of many things upon me and if such things would reveal upon other persons then they would think it as miracles but I think all these things more than the major sins. To run away from sleep I used to sit on such stones in their depth there were dangerous caves so if there will be wink

sleep by chance then I used to see upon wake up sitting on the stones and hanging in the air.

He told once in the Eid night he went to see Abul Faris and saw him sleeping there and then there came an idea in my mind that if some quantity of ghee was available there from any source to enable him to prepare some thing for the friends but while sleeping Abul Faris told me at that time to throw the ghee at once. He told this sentence three times. When he wake up I explained this event to him and he told me he was watching a dream that we were in big palace and from there we were desiring for the look of Allah but in that situation you were holding the ghee in your hand so I asked you to throw it at once.

Some body reached in his presence and he thought that if sheikh wants some thing from him so that he can fulfill his needs.Then he told him that “He never demands any thing from any body except Allah and also I do not need any person’s help and assistance.”

Abu Amr Zujaji told I was in his service for many years and never away from him even for the seconds and once I and other disciples heard a divine call in our dreams in which it was told that due to living in the company of Abu Osman  all  of  you  are  away  from  our  court  so  when  I wanted to tell this dream to  him then he left the  house without wearing his foot wear and he told us that you all heard also so I also tell all of you to leave me and follow Allah and allow me to continue the worship of Allah.    Abu  Baker  Faris told  once  he  told  me  that  “I  used  to think  before  that  Allah  is  having  personality  and  He  is there in the directions but when he reached to Baghdad his thinking was corrected that Allah is free from personality

so due to this reason he has sent a letter to Mashaikh (learned persons) of Makkah that I again become Muslim upon reaching Baghdad. He asked one of his disciples if some body will ask you the condition on  which  Allah exists then what will be your reply and that disciples told him he will reply that Allah’s present condition is same as he was at the time of eternity. When he heard his reply he told him your  reply is right. Abdur Rahman Salmi told once he was in his company and some body was pulling water from the well and there was sound of sphere wheel of the well and then he asked me do you understand what the wheel is saying. And when he replied I do not know then told him it was telling Allah, Allah.

He told if there will be no feeling of ecstasy from the chirp of birds and the movement of trees as well as blowing of wind then he is not right in his claim of ecstasy. He told Allah will grant light to the real Zakir (the person who will remember Allah) and with which he can observe all items of the universe and he will get such pleasure in which he will prefer for the finish of himself because in such condition there will be no control of the pleasure.

heart and with this sword of lesion he should kill all those ideas because Allah is free from all these things.

He told there are 100 stages for Arif (one who know the knowledge of Allah) and Zakir (one who remembers Allah) which are harder than the death because death can not discontinue them from Zikr (remembrance of Allah) and Marafat (the knowledge of Allah). He told there are two ways to reach towards Allah. 1. The prophethood. 2. To follow the Sunnah of the prophet (traditions of holy prophet)

The prophethood is discontinued  so  one  should  follow the Sunnah of the prophet (traditions of the holy prophet) and it is must for the follower of the truth because without following this, it is not possible to reach towards the way of Allah.

to ignore every thing for the meditation of Allah and to remove the remembrance of all things from his heart. One who demands for the willingness of Allah then he should leave all wishes and desires from his soul. One who is not able to follow such things then the loneliness would become problem for him. He told “If there will be some love for the soul and world is there in the disciple’s heart then he would not get the higher status of Khasan-e-Kuda (great saints of Allah).”

He told “Sinner is better than the claimant because he admits his sins but that claimant will not leave his claim and run behind it.” He told “One who eats the food of the rich persons due to his soul’s desire and greed then he will

not get success as he is unable for his excuse in  this respect but in case of helplessness his excuse is acceptable. One who turns towards the creations then he will lose his condition.” He told “One who will disconnect the love of indigence persons and love the rich persons so in such case they will made blind person by Allah.”

He told “The men’s endeavors for the heart’s cleaning is like that if we say some body to uproot any tree but the person inspite of having strength will not be able to remove the tree and if he delays the uprooting of the tree by thinking that he can remove the tree at later time when he will get strength then he will uproot the tree but such thing is also not right because due to such delay of that person to uproot the tree as a matter of fact that person will become weaker and the tree will become strong.” He told “Nobody can get good turn if he will avoid the obligatory and supererogatory prayers.”

He told “To know the nature of creator and creations is called the knowledge of Allah.”

He told “Super quality in human beings is that the thing which you do not like for your self then you should also not like the same thing for your Muslim brothers and to offer him the thing which you possess with you but do not demand any thing from him and avoid your cruelty on him but be patient on his cruelty and censure for it. But do not take his service for your self. The best deed is that which should be done as per the knowledge. He told the  best I’tekaf (retirement (to mosque) for  continued  prayer)  is that in which there should be always care about the orders and prohibitions.

He told “The right person will follow fear and hope as per the requirement of the situation.” He told “Upon the observation one should follow the orders and it is called servitude.” He told “It is sign of passion to remember the death during the time of pleasure and comfort”.

He told Arfian (one having an intimate knowledge of Allah) will get light and knowledge of Allah with which they will be able to observe the wonders of Allah.” He told Banda Rabbani (a pious person) will not eat food for forty days and Banda Samdani (a godly man) can remain in the starvation in the 80 days. He told “Those who love the friends of Allah (pious persons) and for this sake Allah will include them also among His friends.”

At the time of his death when the physicians were brought there to check his illness he told the position of the physicians for him is like the brothers of prophet Yousuf (peace be upon him) for him. How the brothers of prophet Yousuf (peace be upon him) caused troubles and difficulties for him but inspite of all such difficulties and problems Allah due to his mercy has granted him higher position and also given him prophethood and kingdom of Egypt and in the same way the medicines of physician are useless and no effect for him and then he demanded for the ecstasy and died in that condition. 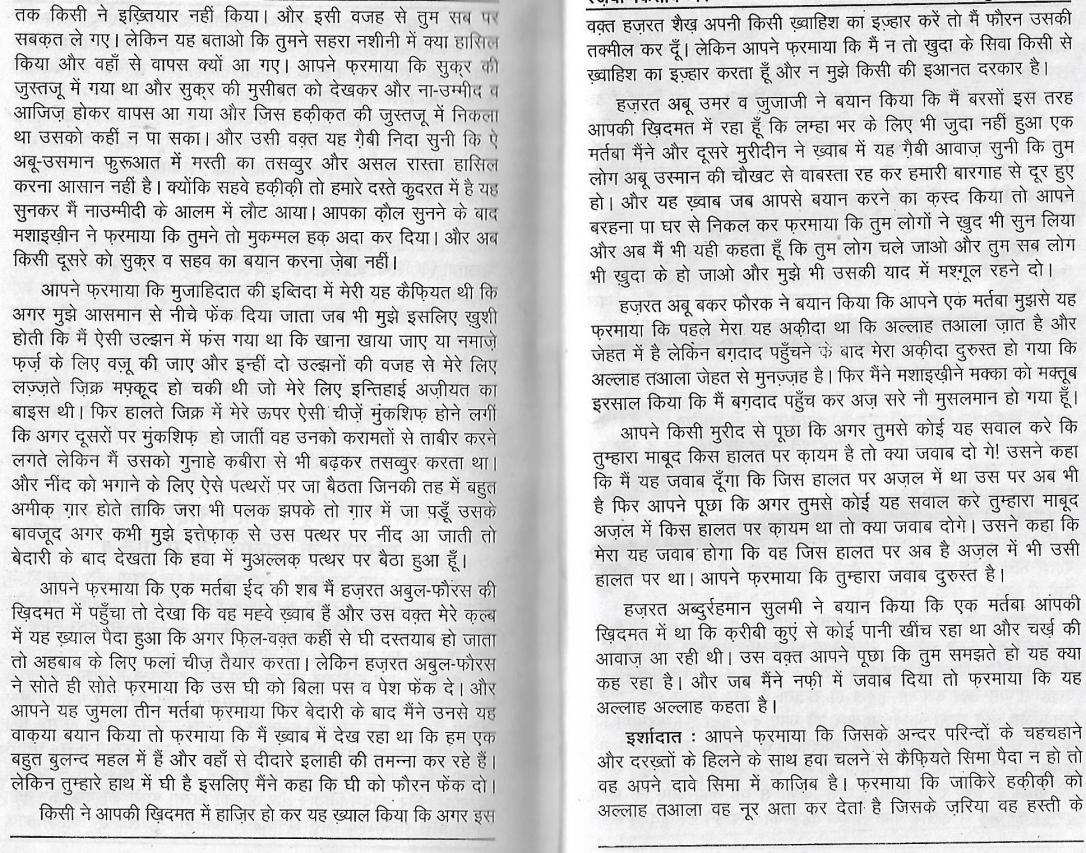