Abu Mihjan r.a was one of the companions of the Prophet s.a.w (peace and blessings of Allaah be upon him) (may Allaah be pleased with them).

Abu Mihjan r.a belonged to the Saqeef clan. He was a cousin of Abu Ubaid r.a who had commanded the Muslim forces in Iraq and was martyred at the battle of the Bridge.

The home town of Abu Mihjan r.a was Taif. When the Muslims under the Holy Prophet besieged Taif after the fall of Mecca, Abu Mihjan r.a fought against the Muslims. His arrow mortally wounded Abdullah r.a son of Hazrat Abu Bakr r.a.

Later when the Saqeef submitted to the Holy Prophet and accepted Islam, Abu Mihjan r.aalso became a Muslim. He was staunch in his faith in Islam, but he had weakness for liquor, and sometimes secretly drank wine.

At Madina, Umar r.a caught him drinking and as a punishment he was exiled to Yemen. Later he was forgiven and was allowed to join the Muslim forces in Iraq under Saad. In camp, Abu Mihjan r.a drank again, and on discovering his offence Saad had him whipped and thrown into a cellar in fetters. His cell was in the palace at Qadisiyya where Saad r.a was lodged and from where he commanded the war operations.

This Sahaabi was suffering from an addiction to drinking wine. He was brought and flogged, then brought and flogged again, but he knew that this problem did not relieve him of his duty to strive for the cause of Islam. So he went out with the Muslims to al-Qaadisiyyah as a soldier, seeking martyrdom on the battlefield. In al-Qaadisiyyah he was brought to the commander of the army, Sa’d ibn Abi Waqqaas r.a, for having drunk wine. Sa’d detained him so that the Muslims ranks would be cleansed of such a person.

This detention was a harsh punishment which caused Abu Mihjan r.a a great deal of anguish. When he heard the sounds of swords and spears, and the neighing of the horses, and he knew that the jihad had begun, and the gates of Paradise were open, he was filled with longing for jihad.  He called to the wife of Sa’d ibn Abi Waaqqas r.a saying, “Let me go and I promise Allaah that if I come back safe and sound, I will put my own feet in the chains, and if I am killed, then you will be rid of me.” She felt sorry for him, so she let him go, and he leapt onto a horse belonging to Sa’d which was called al-Balqa’. Then he picked up a spear and set off. He did not attack any group of enemy soldier but he scattered them. Sa’d was supervising the battle and he was surprised and said, “This is the running of al-Balqa’, and the style of attack is that of Abu Mihjan, but Abu Mihjan is in chains.” 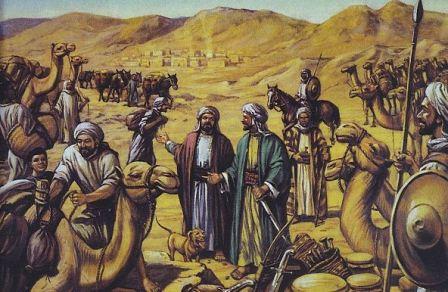 When the battle was over, Abu Mihjan went back and put his feet in the chains. The wife of Sa’d told him this wonderful story, so Sa’d admired this man and his care for Islam and his longing for jihad, so he himself went to this wine-drinker, released the chains with his own hands and said, “Get up, for by Allaah I will never flog you for drinking wine again.” Abu Mihjan said, “By Allaah, I will never drink it again.”

Islamic laws and rules for Women Ramadan Fasting ​♣ What is Fasting? ​Fasting is the fourth of the five pillars of Islam. It is called in Arabic as “Sawm” meaning abstain. Fasting means one should abstain herself from eating, drinking and all the actions which will nullify the fasting from true dawn (time of fajr prayer) […]

The Virtues, from Philosophy to Scripture: Refining Character Traits in Miskawayh and Ghazālī

The Virtues, from Philosophy to Scripture: Refining Character Traits in Miskawayh and Ghazālī This book sits at a meeting place of two ethical traditions that did more than merely borrow from one another. Philosophy and Sufism were, in terms of ethics, rivulets of shared streams of knowledge. Borrowings, correspondences, and deviations between them appear in […]

We were one hundred and thirty men sitting with the Prophet. The Prophet (ﷺ) said, “Have anyone of you any food with him?” It happened that one man had one Sa of wheat flour (or so) which was turned into dough then. After a while a tall lanky pagan came, driving some sheep. The Prophet […]

That he went with Allah’s Messenger (ﷺ) to the house of Maimuna, who was his and Ibn `Abbas’ aunt. He found with her a roasted mastigure which her sister Hufaida bint Al-Harith had brought from Najd. Maimuna presented the mastigure before Allah’s Messenger (ﷺ) who rarely started eating any (unfamiliar) food before it was described […]

who attended the Badr battle and was from the Ansar, that he came to the Prophet (ﷺ) and said, “O Allah’s Apostle! I have lost my eyesight and I lead my people in the prayer (as an Imam). When it rains, the valley which is between me and my people, flows with water, and then […]