He was great source of mysticism and abstinence. He was also great personality who work hard for the willingness of Allah and piousness.

Shibli used to respect him greatly.

He told “Allah made the world with great wisdom and in which every body will be benefited according to his capacity and endeavors.” He told “It is must for human beings to follow the path leading towards Allah and if it is not possible then they should adopt the company of pious persons who are friends of Allah and who will help them to lead towards the path of Allah so that one can be successful in both worlds. While adopting good deeds and avoiding bad deeds and in this way one should be keep away from the darkness of ignorance. “

knowledges  will  leads  him  towards  the  destruction  and astray.”

He told “One who will follow the truth in between him and Allah then he will keep away from the mankind.”

He told “Allah created many creatures and also  made many paths which will lead towards him and every body as per his capacity and endeavour will opt  one  way or other and with which he will reach towards Allah.”

He told “There is way from Allah towards mankind but there is no path from the mankind towards Allah.”

He told “By establishing strong relations with Allah one should have to reduce his relations with the mankind.”    He told “The best man is one who thinks other person better  than  himself  and  also  he  should  think  that  such person’s  path  will  lead  towards  Allah  and  such  path  is

better than other paths.”

He told “In the condition of trust one must check defects of his soul and also thinks the favors of Allah for him.”   He told “It is must for every body to use all his actions and movements for the sake of Allah. Except in case of emergency such  actions  and  movements  should  be  used for  the  worldly  requirements  and  one  should  always control his tongue from the useless talking.”

He told “One who will not adopt silence then such person will involve in worst things even if he stays in the lonely place.”

keep away from other sex is called the disciple.”

soul and life of the heart. Because the life of heart will cause the death of the soul.

Unless there is help from Allah one can not get the freedom from inordinate appetites.

He told “One will not get friendship of Allah if there is no intention and belief and also if he will not be free from other things except Allah and also he will not be safe from the problems of his souls.”

Unless there is no finish of the soul one can not know the reality of almighty Allah.

The death is  one of the doors for the journey towards another world and without which there will be no reach towards Allah.

He told “All universe is veil and an enemy to me but in them I can not do any thing and I am helpless.”

He told “In any work if there is hypocrisy and show so for this matter one should not be proud of it.”

He told “Always be courageous in life because it is main

of all things and all results are depend upon it. One can get all things with the help of courage only as courage is the feeling that you can win.”

So please avoid any thing in this matter.” 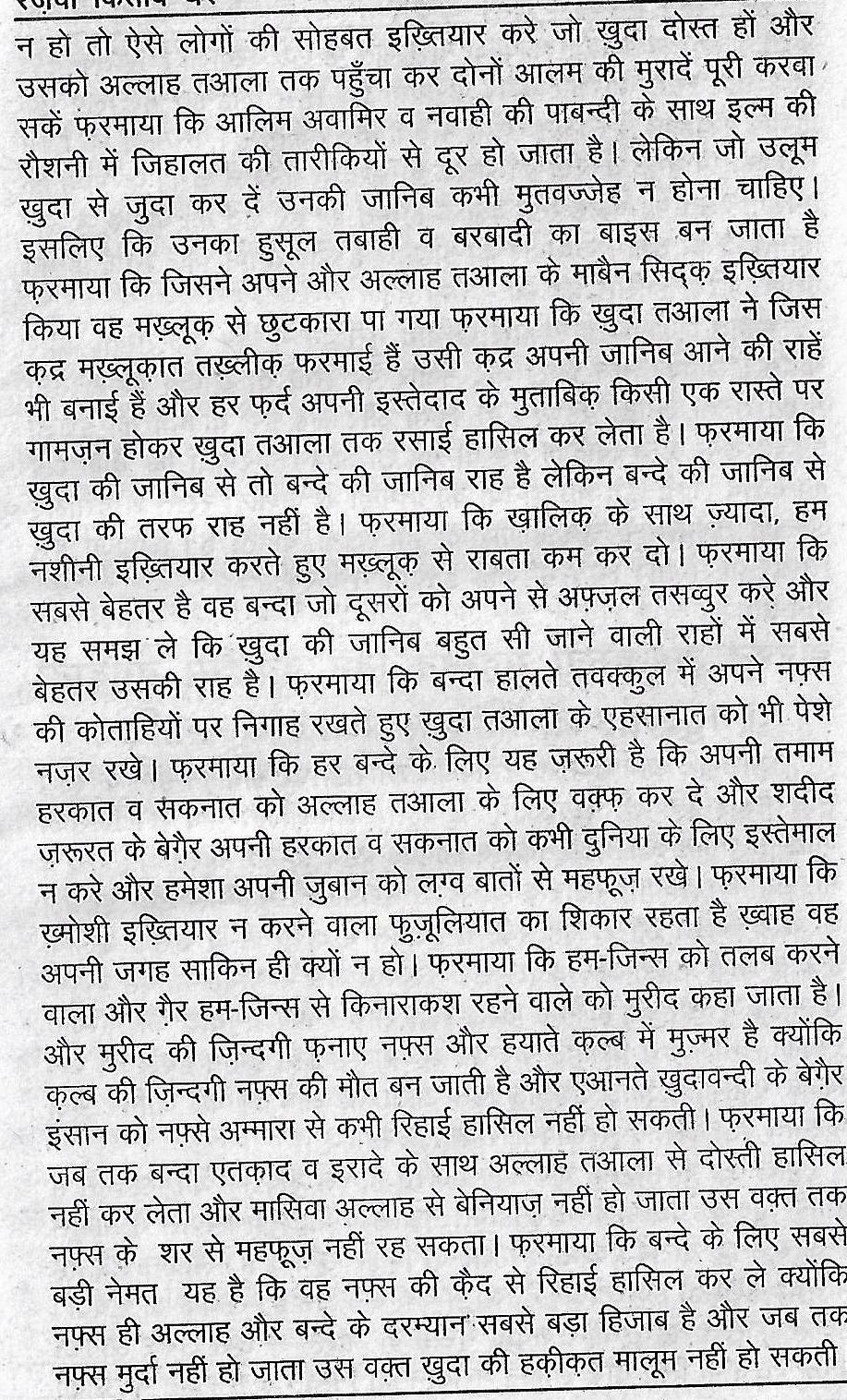 Love is the First Requirement of Respect.