His father was Sayyid Ali Abul Hasan and mother was Fatima al-Ansari the daughter of Yahya Najjari. His Sheikh was Ali Al Wasiti. When he was seven years old, his father passed away in 507 A.H in Baghdad and buried there. Soon after, his maternal Uncle Sheikh Mansur ar-Rabbani took him into his care and educated him.

Sheikh Ahmad Rifâi (R) memorized the holy Qur’an by the age of seven. In this year, after the demise of his father, his maternal Uncle Mansur al-Rabbani moved with his family to the region of Dikhla. There he sent his nephew to Abul Fadl Ali al-Vasiti, who was an expert in the canon law of Islam, a commentator of the holy Qur’an, and a great preacher.

He occupied all his time with obtaining religious knowledge, and indeed Allah Almighty bestowed him the knowledge. In due course, even his own teachers and the people who taught him respect learned the essence of respect when they were in his presence.

In addition to attending the Dhikr gatherings of his uncle, Sheikh Mansur ar-Rabbani, Sheikh Rifâi also attended the courses of his other uncle, Sheikh Abubaker, who was a great scientist of his era and the sultan of scientists. He eventually memorized the book Tanbih, which deals with the Fiqih (Islamic jurisprudence) of Shafi School according to Imam Abu Ishaq Al sShirazi, and wrote an explanation about the book.

When Sheikh Ahmad Rifâi (R) was twenty years old, Abu Fadl Ali, who was the Sheikh of Wasit province and his teacher, awarded him a teaching certificate encompassing the sciences of canon law and permission to initiate a Sufi order, gave him the name “father of external and interior sciences,” and dressed him with his own Sufi’s cloak. His teachers and his sheikhs agreed about the greatness of his rank and the superiority of his worth.

Sheikh Ahmad Rifâi (R) remained in Dikhla region for a short time and after that went back to his father’s guesthouse for travelers in Hasen. He became very well known. When he was twenty-eight, his uncle Sheikh Mansur (R) requested him to lead the Sufi lodge and Caliphs after him. He also instructed him to live in the Sufi lodge of Sheikh Yahya an-Najjari, who was his grandfather from his mother’s side. Sheikh Ahmad Rifâi took up his post (Sheikh ship) there as an enlightened master and began teaching in this Sufi lodge. By the time Shiekh Ahmad Rifâi (R) reached the age of thirty-five, his Murids (disciples) numbered over seven hundred thousand.

Shiekh Ahmad Rifâi (R) taught the Sunnah (the way of the Prophet Muhammad (PBH)) and the details of the Qur’an to the public, and he always said that the trade of a wise man is to show the way that leads to Allah and to direct hearts towards Allah.

He held courses on Hadith, Islamic canon law, religious precepts, and commentary of the Qur’an on all days of the week except Mondays and Thursdays. He sat in his pulpit on Monday and Thursday afternoons and preached to intellectuals and the public. Because of the depth and the influence of his words, the people were captivated, their intelligence was amazed, and their hearts submitted to him.

Whenever he sat in his pulpit to give a lecture, crowds–including advanced scientists, preachers, spiritual teachers and the general public–gathered. When he began to speak, knowledge poured out with his words like the perpetual stream. Wise men became enthusiastic when they heard his beautiful and influential words and gave their ears to his extensive knowledge. The denying and obstinate were tongue-tied in the presence of the power of the evidence. Literary men profited from his outstanding expression, scientists from his skills and talents and philosophers from his deep and wise manner of speaking.

In his book Savad ul-Aynain, the writer Imam Rafii (R) narrates, “Sheikh Salih Yusuf Abu Zakariyya al-Asqalani, who was a great expert in the canon law of Islam, told me: ‘I had gone to Ummu Ubydah to visit Sheikh Ahmad Rifâi (R). There were more than one hundred thousand people around the guesthouse; some were managers, scientists and sheikhs, and the others were the ordinary people. He gave dinner to all of them and was very friendly to everyone. He started to preach in the afternoon of a Thursday. In the audience were preachers from the province of Wasit, as well as a religious community of doctors of Muslim theology of Iraq and the important people of the province. One group asked questions about the science of commentary of the holy Qur’an, another asked about subjects dealing with the recorded sayings of the Prophet Muhammad (PBH), another asked about Islamic jurisprudence, another asked about the disagreements between the different religious opinions, and yet another group asked many questions about different areas of science. Sheikh Rifâi (R) answered more than two hundred questions, and he did not get angry when he was answering the questions. I became embarrassed because of the insensitivity of people asking the questions, and I stood up and said, “Is this not enough for you? He can answer every question about the written sciences, without facing any difficulty, with the permission of Allah!” Sheikh Rifâi (R) smiled at my words and said, “Abu Zakariyya, allow them to ask before I pass away. Certainly, the world is a house from which we will all depart. Allah changes all situations, all of the time.” All the public cried at this answer. The crowd was perplexed and anxious exclamations were heard. Forty thousand people became his students because of the spiritual effect of his talk.’” 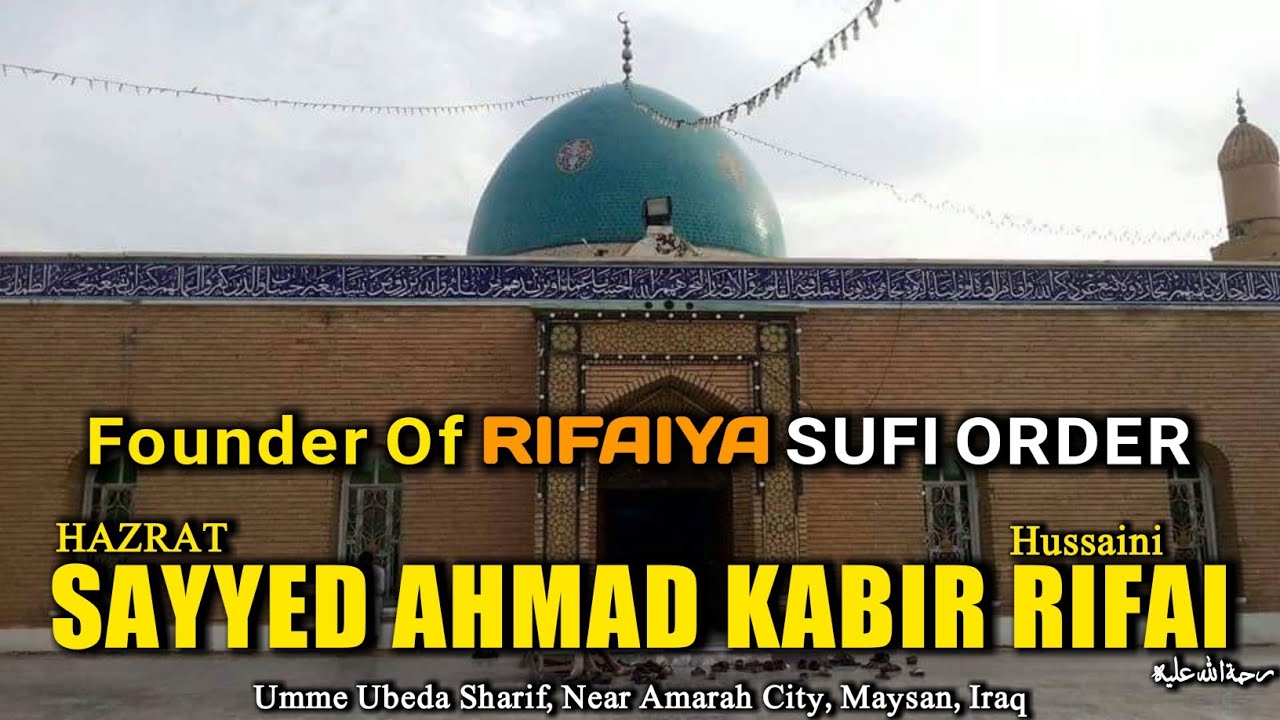 Sheikh Rifa’i (R) has known as one of the four major Sheikhs of Thariqath (Aqthab al Arbaa, a Quthub of the time, not just of a local area). Another major Quthubs are Sheikh Abdul Qadir al Jeelani (R).

Sheikh Rifâi’s talks, his actions, his behavior and his every breath were for the sake of Allah Almighty. He always had a smiling face, was modest and good-tempered, endured suffering, and was very patient. He did not get personally cross with anyone, and did not want any help for his own person. On the contrary, he loved for Allah, and even his anger was for Allah. He did not rebuke anybody who behaved in a manner that he did not like. He considered neither his family nor himself superior to other people. Speaking about this he said, “According to the Islamic law, everybody is equal to everybody else: it doesn’t matter if they are close relatives or if they are strangers to us.” The righteous people more are closer to Allah.

Sheikh Rifâi (R) used to go to the houses of the leprous and bedridden, wash their clothes, bring their meals, sit and eat with them, and pray for them. When he heard that the people of his city were sick in a far-off city, he used to visit them. He also cured wounded animals, and said, “Compassion for the creatures of Allah is one of the qualities that bring human beings closer to Allah.”

Abu Musa al-Haddadi said that in the town of Haddahiyya there was a woman whose children were always stillborn. This woman said, if I have a child, I would give this child in the service of Ahmed Rifai. A few years later, she had a daughter who was hunchbacked and lame. Because of this, the other children in the village always made fun of her. One day, Ahmed Rifai was visiting this town and all the people went to the road to see him. The little girl threw herself at Rifai’s feet and cried out, “You are my mother’s Sheikh; please heal me from these problems!” and wept. When Sheikh Rifai saw her situation he cried as well, and praying over her, he placed his hands on her back and head. The girl’s back and leg were both healed. This is why, Ahmed Rifai is called the Father of the Lame.

Once, Sheikh Rifâi (R) spent forty days caring for a dog with leprosy in the wilderness. When he returned and was asked why he had spent so much time caring for an unclean beast, he replied, “When I die and meet my creator, what would I have said if He asked me why I hadn’t helped one of His creatures?”

One Friday, when Sheikh Rifa’i (R) woke up for prayer, there was a cat asleep on his robe. He asked his wife to bring the scissors, cut off the part of his robe where the cat lay, stood up and went to prayers. When he returned, the cat had awakened and left, so he asked his wife for thread to sew the robe back together. When he saw his wife’s displeasure at what he had done to his robe, he said “Do not worry, nothing but goodness happened and I did not suffer because of this; this was a good thing.”

Hadrat Sayyid Ahmad ar- Rifâi used to advise people to guard themselves from overindulging in the things that are neither recommended nor forbidden by religious law, such as overeating and oversleeping. He used to recommend worshipping at night. He also used to recommend keeping away from people who do not know their limits, who behave in excessive manner, who see themselves as superior to others, and who argue with each other.

He used to do his service by himself, repair his own shoes, and carry the firewood which was prepared for him to the houses of people who were sick, orphaned, fallen or without relations or friends.

He helped the blind find their shoes after worship, and also helped guide them to the places that they wanted to go. He respected old people and recommended respecting them. He always used to quote the words of our Prophet Muhammad (saw), “If a person shows respect to old people and those in need, Allah will assign people who will respect them when they are old.”

Hadrat Sayyid Ahmad ar- Rifâi used to go to the houses of the leprous and bedridden, wash their clothes, bring their meals, sit and eat with them, and pray for them. When he heard that the people of his city were sick in a far-off city, he used to visit them. He also cured wounded animals, and said, “Compassion for the creatures of Allah is one of the qualities that bring human beings closer to Allah.”

He was very kind and compassionate to orphans. He would cry for the poor, grow merry with their joy, and behave very modestly towards them. He considered himself as one of them.

Great people in Hadrat Sayyid Ahmad ar- Rifâi ‘s time said, “The most important reason for his reaching his high station was his great kindness to all creatures and his humility.”

He used to show respect to the wise and the experts in the canon law of Islam and wanted everybody else to respect them. He said, “The wise are the leaders and fundamentals of the community.”

Hadrat Sayyid Ahmad ar- Rifâi was not inclined towards worldly things. He did not store any possessions at any time: although he had great wealth, he did not own more than two garments at the same time, either in summer or winter. His wealth was much more than the wealth of governors and famous rich men. He used to distribute his revenue to dervishes and to people who came to the dervish lodge. Upon his passing away, his possessions were given to the people.