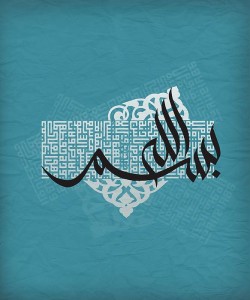 Sa’eed bin Jubair narrated: “I said to Ibn ‘Abbas: ‘Nawf Al-Bikali claims that Musa, of Banu Isra’il is not the companion of Al-Khidr. He said: ‘The enemy of Allah has lied. I heard Ubayy bin Ka’b saying: “I heard the Messenger of Allah (saws) say ‘Musa stood to deliver a Khutbah (Lecture) to the children of Isra’il. He was asked: “Who is the most knowledgeable among the people?” He said: “I am the most knowledgeable.” So Allah admonished him, since he did not refer the matter back to Him. Allah revealed to him: “A slave, among My slaves at the junction of the two seas, is more knowledgeable than you.” So Musa said: “O Lord! How can I meet him?” He said to him: “Carry a fish in a basket, wherever you lose the fish, then he is there.” So he set off, and his boy (student) set off with him – and he was Yusha’ bin Nun. Musa put a fish in a basket, he and the boy set off walking, until when they reached a rock, Musa and his boy fell asleep.

The fish was flopping around in the basket, (eventually) falling into the sea.’ He said: ‘Allah held back the flow of water until it was like a tunnel, and the fish could glide. They set off the remainder of the day and the night, and Musa’s companion forgot to inform him (of the escape of the fish). When Musa arose in the morning, he said to his boy: Bring us our morning meal; truly we have suffered much fatigue in this, our journey (18:62).’ He said: ‘He had not gotten tired until he passed the place which Allah had ordered him to go. He said: Do you remember when we betook ourselves to the rock? I indeed forgot the fish, none but Shaytan made me forget to remember it. It took its course into the sea in a strange way (18:63).

Musa said: That is what we have been seeking. So they went back, retracing their tracks (18:64). He said: ‘So they began retracing their tracks.’” Sufyan (one of the narrators) said: “People claim that there is a spring of life at that rock, no dying person has its water poured over him, but he becomes alive, and the fish came in contact with some of it, so when the water dropped on it, it became alive.” “He

[the Prophet (saws)] said: ‘They retraced their tracks until they arrived at the rock to see a man covered in a garment. Musa greeted him, and he replied: Is there such a greeting in your land? He said: I am Musa. He said: Musa of the children of Isra’il? He said: Yes. He said: O Musa! Indeed you have some knowledge from Allah, which Allah taught you, which I have not been taught, and I have some knowledge from Allah, which Allah taught me, which you have not been taught.’ So Musa said: May I follow you so that you may teach me something of the knowledge which you have been taught? (18:66) He said: Verily, you will not be able to have patience with me! And how can you have patience about a thing which you know not? He said: If Allah wills, you will find me patient, and I will not disobey you at all (18:67-69). Al-Khadir said to him: Then if you follow me, ask me not about anything until I myself mention it to you (18:70). Musa replied: Yes. So Musa and Al-Khadir set off walking along the shore of the sea.

There they found a wall on the verge of falling down (18:76 & 77). He (the narrator) said: – meaning leaning over (about to collapse) – ‘So Al-Khadir took his hand like this, so he set it up straight (18:77) so Musa said to him: We arrived at these people, they did not treat us as guests nor feed us. If you wished, surely you could have taken wages for it! He said: “This is the parting between you and I. I will tell you the meaning of (those) things over which you were not able to be patient (18:77 & 78).’”

The Messenger of Allah (saws) said: ‘May Allah have mercy upon Musa! We wish that he would have had patience, so that we could have more knowledge about the two of them.’ He said: ‘So the Messenger of Allah (saws) said: ‘The first time Musa had forgotten.’ He said (at that time): ‘A sparrow came, until it perched on the edge of a boat, and pecked at the sea. So Al-Khadir said to him: My knowledge and your knowledge do not diminish anything from the knowledge of Allah, but like what this sparrow diminishes of the sea.’ Sa’eed bin Jubair said: “and he would” – meaning Ibn ‘Abbas – “recite: ‘And there was before them a king who would take every useful boat by force (18:79).’ And he would recite: ‘As for the boy, he was a disbeliever (18:80).’”(Tirmidhi, Sahih)

Imam Suyuti said in his tafsir, “So [there] they found one of Our servants, namely, al-Khidr, to whom We had given mercy from Us — according to one opinion this [mercy] was prophethood; according to another it was authority, and this [latter] is the opinion of the majority of scholars — and We had taught him knowledge from Us (‘ilman is the second direct object), in other words, some knowledge of unseen things; al-Bukhari reports the [following] hadith: ‘Moses was delivering a sermon among the Children of Israel and was asked, “Who is the most knowledgeable of people?”, to which he [Moses] said, “Myself”. Allah then reproached him for not having attributed [his] knowledge as [coming] from Him. Allah then revealed to him the following: “Truly, there is a servant of Mine at the juncture of the two seas; he is more knowledgeable than you”.

Moses then asked, “My Lord, how do I reach him?” He [Allah] said, ‘Take a fish with you and place it in a basket and [the place] where you lose the fish will be [the place] where he is.” He [Moses] took a fish and placed it in a basket and departed together with his lad Joshua son of Nun until they reached the rock. [There] they placed their heads back and fell asleep. The fish began to move about in the basket, until it escaped from it and fell into the sea, and it made its way into the sea in an amazing manner. Allah then held back the flow of the water [preventing it] from [engulfing] the fish, forming a kind of arch over it. When he awoke, his companion [Yusha’ bin Nun] forgot to inform him of [what had happened to] the fish, and so they journeyed on for the remainder of that day and night until on the morning [of the second day] Moses said to his lad, ‘Bring us our breakfast’, to where he says, and it made its way into the sea in an amazing manner’. He [Bukhari] said, ‘For the fish, it [the way it went into the sea] was [by] ‘burrowing’ (saraban), and for Moses and his lad it was ‘amazing’ (‘ajaban) …’ [and so on] to the end [of Bukhari’s report]”. [18:65,Tafsir al Jalalayn]

Allah mentions in the Quran:

18:60 And when Moses said unto his servant: I will not give up until I reach the point where the two rivers meet, though I march on for ages.
18:61 And when they reached the point where the two met, they forgot their fish, and it took its way into the waters, being free. [The fish came back to life] 18:62 And when they had gone further, he said unto his servant: Bring us our breakfast. Verily we have found fatigue in this our journey.
18:63 He said: Didst thou see, when we took refuge on the rock, and I forgot the fish – and none but Satan caused me to forget to mention it – it took its way into the waters by a marvel.[some say this is the place of the waters of life al Khidr found, indicated by the fish coming back to life] 18:64 He said: This is that which we have been seeking. So they retraced their steps again.
18:65 Then found they one of Our slaves, unto whom We had given mercy from Us, and had taught him knowledge from Our presence.
18:66 Moses said unto him: May I follow thee, to the end that thou mayst teach me right conduct of that which thou hast been taught?
18:67 He said: Lo! thou canst not bear with me.
18:68 How canst thou bear with that whereof thou canst not compass any knowledge?
18:69 He said: Allah willing, thou shalt find me patient and I shall not in aught gainsay thee.
18:70 He said: Well, if thou go with me, ask me not concerning aught till I myself make mention of it unto thee.
18:71 So they twain set out till, when they were in the ship, he made a hole therein. (Moses) said: Hast thou made a hole therein to drown the folk thereof? Thou verily hast done a dreadful thing.
18:72 He said: Did I not tell thee that thou couldst not bear with me?
18:73 (Moses) said: Be not wroth with me that I forgot, and be not hard upon me for my fault.
18:74 So they twain journeyed on till, when they met a lad, he slew him. (Moses) said: What! Hast thou slain an innocent soul who hath slain no man? Verily thou hast done a horrid thing.
18:75 He said: Did I not tell thee that thou couldst not bear with me?
18:76 (Moses) said: If I ask thee after this concerning aught, keep not company with me. Thou hast received an excuse from me.
18:77 So they twain journeyed on till, when they came unto the folk of a certain town ship, they asked its folk for food, but they refused to make them guests. And they found therein a wall upon the point of falling into ruin, and he repaired it. (Moses) said: If thou hadst wished, thou couldst have taken payment for it.
18:78 He said: This is the parting between thee and me! I will announce unto thee the interpretation of that thou couldst not bear with patience.

18:79 As for the ship, it belonged to poor people working on the river, and I wished to mar it, for there was a king behind them who is taking every ship by force.
18:80 And as for the lad, his parents were believers and we feared lest he should oppress them by rebellion and disbelief. (when he grew older)
18:81 And we intended that their Lord should change him for them for one better in purity and nearer to mercy.
18:82 And as for the wall, it belonged to two orphan boys in the city, and there was be- neath it a treasure belonging to them, and their father had been righteous, and thy Lord intended that they should come to their full strength and should bring forth their treasure as a mercy from their Lord; and I did it not upon my own command. Such is the interpretation of that wherewith thou couldst not bear.

Ibn ‘Abbas narrated that Ubayy bin Ka’b narrated that the Prophet (saws) said: “The boy that Al-Khidr killed was destined to be a disbeliever the day he was created.’”(Tirmidhi, sahib)

The Greatest Doctor To Ever Walk on Earth

THE PROTECTED ROOF THE EARTH’S MAGNATIC FIELD: In the Qur’an, Allah (subhanahu wa ta’ala) calls our attention to a very important attribute of the sky: “We made the sky a preserved and protected roof yet still they turn away from Our Signs.” [Qur’an, 21:32] This attribute of the sky has been proved by scientific research […]