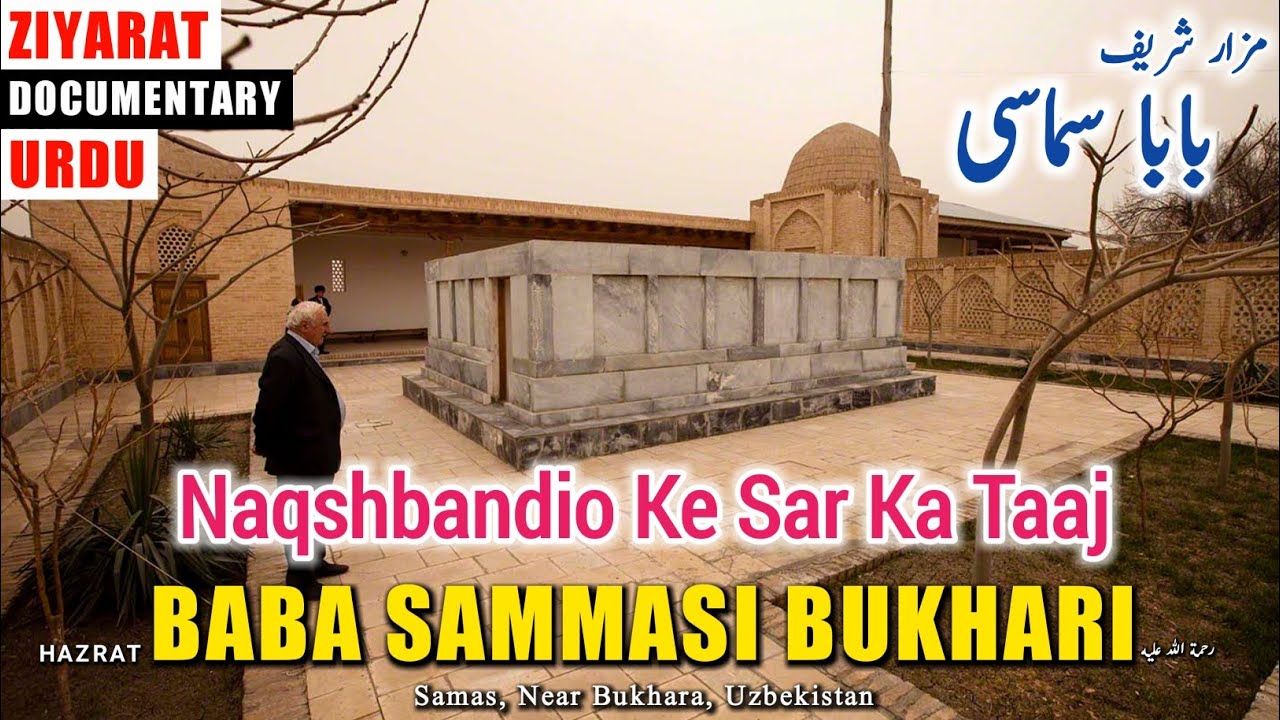 He had a small orchard in the village of Sammās, where he would often prune the shoots with his own hands. He did this with great pleasure. Whenever he clipped a branch, a spiritual state will overwhelm him and the knife would fall from his hand [Rashahāt].

Whenever he would pass from the birthplace of Khwāja Naqshband called Qaṣr-i Hindwān (the pavilion of the robbers), he would say that I smell the scent of a hero from here, soon this place will turn into Qaṣr-i ʿĀrifān (the palace of the gnostics).

One day while he was passing from there, he told his companions that the hero, whose scent I used to smell, has in fact arrived in this world. Then he went to the house of Khwāja Naqshband, and asked to see the child. The grandfather of Shāh Naqshband brought the new born baby to Khwāja Bābā Sammāsī, who said: “This is my son. We accepted him as such a long time ago.”

Then he turned to his companions and told them: “This is the hero whose scent we noticed. Before long, this child will become the paragon of the age and the saving guide of the people of Love!” He then directly spoke to Sayyid Amīr Kulāl, who was to be his deputy in the future, and said: “Do not refuse to undertake the training of my son Bahāʾ ad-Dīn, and be sure to treat him with kindness and affection. If you are negligent in this, I shall not make any right of mine lawful to you!” Sayyid Amīr Kulāl replied: “I am no man if I fail you in the slightest!” [Rashahāt]

Four of his deputies are mentioned in the book Rashahāt:

“We went down to a sea, and stood upon the station of the seashore.
Above that station was a sun rising in our horizon.
Its setting is in us and from us rises its dawn.
Our hands touched its jewels, from which came forth our souls.
At that time we too became jewels.
Tell us what is that sun, its meaning and secret;
What is that pearl which came out from the sea?
We went down to a universe whose name in our book is the void.
It is too narrow to contain us but can be contained in us.
We left behind the stormy seas.
How can the people know what we have reached?”

Shaikh Muhammad Baba as-Samasi (q), the distinguished student of al-Azizan, was the Scholar of the Saints and the Saint of the Scholars. He was unique in the two knowledges, the inner and the outer. His blessings permeated every nation in his time. From his desire to learn, he caused every unseen knowledge and secret to appear. He was the pinnacle of the Suns of External and Internal Knowledge of the Eighth Hijra Century. One of his miraculous signs was his Ascension from the Dome of the Rock, which was his heart, to the station of the Knower of the Knowers. From everywhere those versed in spiritual wisdom made the pilgrimage to his Garden of Knowledge and circumambulated the Ka’aba of his Guidance.

He was born in Sammas, a village in the suburbs of Ramitan, three miles from Bukhara. He progressed in his journey by reading from the Sciences of the Qur’an, memorizing the Qur’an and the Prophetic Tradition (hadith), and becoming a great scholar in Jurisprudence. Then he began to study the Speculative Theology, Logic, and Philosophy (‘ilm al-Kalam), as well as History, until he was a walking encyclopedia of every kind of art and science. He followed Shaikh Ali Ramitani al-‘Azizan (q) and he was constantly engaged in struggling against his self. He was put into seclusion on a daily basis, until he reached such a state of purity that his shaikh was permitted to transmit to his heart from the Unseen Heavenly Knowledge. He became very famous for his miraculous powers and his high state of sainthood. Shaikh ‘Ali Ramitani (q) chose him before his death as his successor and ordered all his students to follow him.

He used to say, as he passed the village of Qasr al-cArifan, “I am smelling from this place the scent of a Spiritual Knower who is going to appear and after whose name this entire Order will be known.” One day he passed the village and said, “I am smelling the scent so strongly that it is as if the Knower has now been born.” Three days passed, and the grandfather of a child came to Shaikh Muhammad Baba as-Samasi saying, “This is my grandson.” He said to his followers, “This baby is the knower that I was telling you about. I am seeing in his future that he is to be a guide of all humanity. His secrets are going to reach every sincere and pious person. The heavenly knowledge that Allah is going to shower on him will reach every house in Central Asia. Allah’s name is going to be engraved (Naqsh) on his heart. And the Order will take its name from this engraving.”

“We must always be asking forgiveness, being careful in all our affairs, following the footsteps of the good and pious, following their internal teachings, and safeguarding the heart from all whispers.”

“Be guided by the teachings of your shaikhs, because they are more direct to cure you than reading books.”

“You must keep in the association of a saint. In that association you must keep your heart from gossiping and you must not speak in their presence in a loud voice, nor should you be busy in their company with prayers and voluntary worship. Keep their company in everything. Don’t talk when they are speaking. Listen to what they say. Don’t look in their homes at what they have, especially in their rooms and their kitchens. Never look towards another shaikh but keep the belief that your shaikh will make you arrive. And don’t ever connect your heart to another shaikh, as you might be harmed by that. leave behind whatever you have been raised on in your childhood.

“In keeping your shaikh you must not keep in you heart anything but Allah and His Name.”

“One time I went to see my shaikh, Shaikh cAli ar-Ramitani. When I entered his presence, he said to me, ‘O my son, I am seeing in your heart the desire for an Ascension.’ As soon as he said that he placed me in the state of vision, where I saw myself walking day and night, from my country to reach the Mosque of the Dome, Masjid al-Aqsa. When I reached Masjid al-Aqsa, I entered the mosque and I saw a man there, clothed all in green. He said to me ‘Welcome, we have been waiting for you for a long time.’ I said, ‘O my shaikh, I left my country on such and such date. What is today’s date?’ He answered, ‘Today is the 27th of Rajab.’ I realized I had taken three months to reach the mosque, and to my surprise I had arrived on the same night as the night of the Prophet’s Ascension.

“He told me, ‘Your shaikh, Sayyid ‘Ali ar-Ramitani has been waiting for you here for a long time.’ I went inside, and my shaikh was ready to lead the prayer. He lead the Night prayer. After completing the prayer, he looked at me and said, ‘O my son, I have been ordered by the Prophet

to accompany you from the Mosque of the Dome to the Sidratul Muntaha, the same place to which the Prophet

ascended.’ When he finished speaking the green man brought two creatures the like of which I had never seen before. We mounted these creatures and we were lifted up. Wherever we were lifted up, we were acquiring knowledge of those stations of what was between Earth and Heavens.

“It is impossible to describe what we saw and learned in that ascension, because words cannot express what relates to the heart, and it is not conveyable except by taste and experience. We continued until we reached the State of the Reality of the Prophet (al-haqiqat al-Muhammadiyya), which is in the Divine Presence. As soon as we entered this state, my shaikh vanished and I vanished. We were seeing that there is nothing in existence in this universe except the Prophet

. And we were perceiving that there is nothing beyond that except Allah Almighty and Exalted.

“Then I heard the Prophet’s

voice saying to me, ‘Ya Muhammad Baba as-Samasi, O my son, that path you are on is one of the most Distinguished ones, and those who have been chosen to be stars and beacons for human beings will be accepted in that path. Return, and I am supporting you with all my power, as Allah is supporting me with His Power. And keep in the service of your shaikh.” As the voice of the Prophet

came to an end, I found myself standing in the presence of my shaikh. That is a great blessing, to be in the company of such powerful shaikhs, who can take you to the Divine Presence.”

Shaikh Muhammad Baba as-Samasi (q) died in Samas on the 10th of Jumada al-Akhir, in the year 755 H. He had four khalifs, but the Secret of the Golden Chain he passed to Shaikh Sayyid Amir Kulal ibn as-Sayyid Hamza (q).