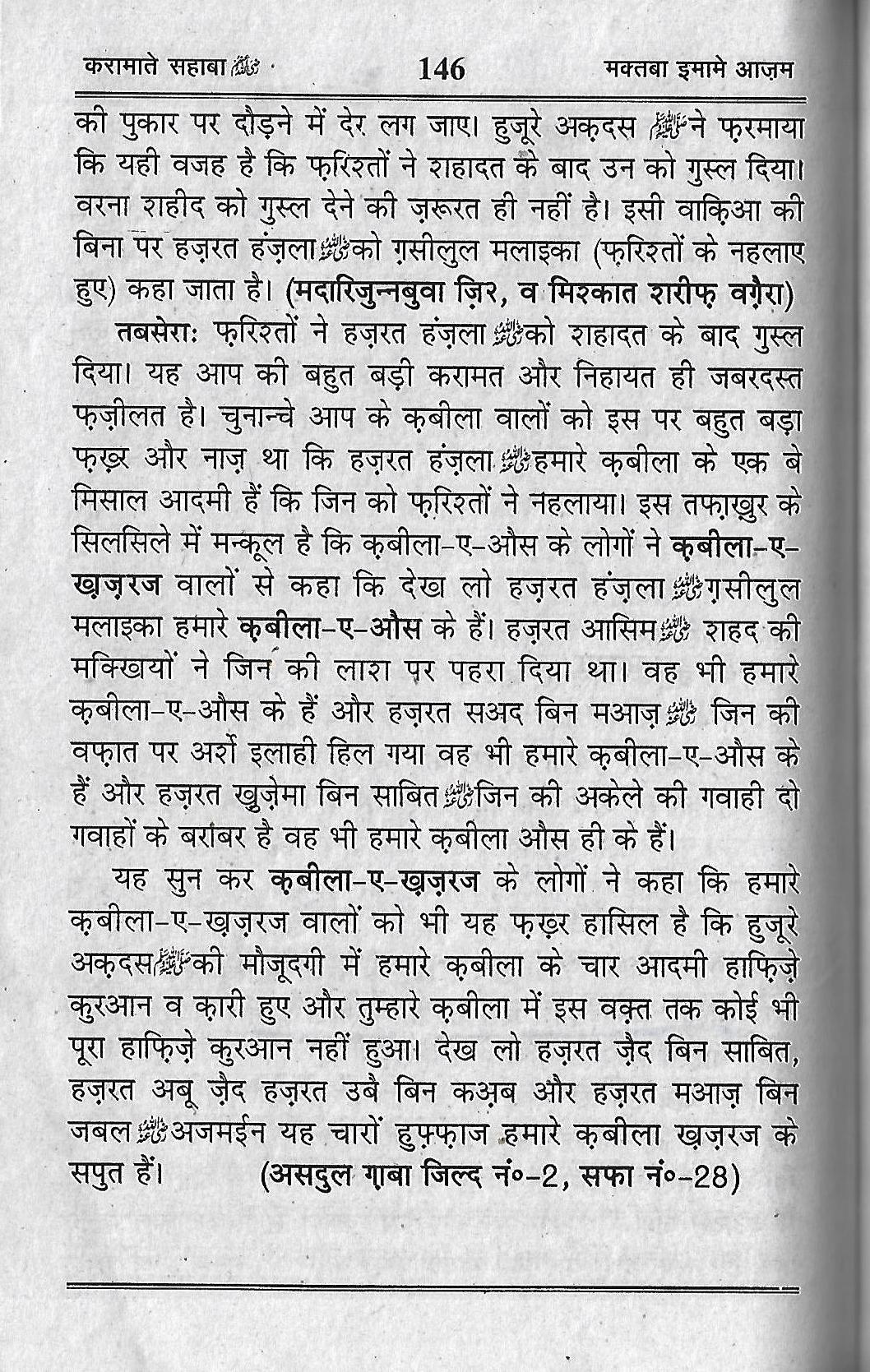 During the battle of Uhud, Hazrat Hanzala (R.A) fought with such spirit that he was able to pass through the barrage of soldiers and ultimately reached the Mushrikeen’s leader, Abu Sufyaan (who later accepted Islam).

He (R.A) slashed at the legs of Abu Sufyan’s mount (horse). With legs severed, the horse came to the ground bringing Abu Sufyan down. He (R.A) swiped to attack him and was close in doing so, until he (R.A) was intercepted by Shadaad bin Aswad, who attacked Hazrat Hanzala (R.A) from behind, thus making Hazrat Hanzala (R.A) Shaheed (Martyr).

During this battle many Sahabah Iqraam (R.A) were Martyred. Holy Prophet (S.A.W)instructed the Martyrs to be buried still covered with blood, in the condition that they had fallen.

As the blessed Sahabah (R.A) retrieved the bodies of their Martyred brothers, they came upon the body of Hazrat Hanzala (R.A) above the earth with water dripping from it. Seeing this, the Companions of the Prophet (S.A.W) reported the event to Him, He (S.A.W) exclaimed that He had seen the Angels give him a bath in between heavens and the earth with fresh rainwater kept in a silver tray.

Hazrat Abu Saeed Al-Saady (R.A) states, “When we went to his corpse and we witnessed the water dropping down from his head. It was a curious event, for the Martyrs are buried un-bathed. Then why did the Angels give bath to Hanzala?”

The Sahabah asked Hazrate Jamila (R.A) (wife of Hazrat Hanzla (R.A) and the sister of Hazrat Abdullah bin Ubayye (R.A)) concerning the state of her husband prior to battle. As she (R.A) started to explain, it soon dawned upon them that the last night was her wedding night. Early in the morning without having the time for his purification bath (Ghusl) he (R.A) left for the battlefield for he did not like delay in obedience of the Prophet (S.A.W).

After her husband went to Jihad, she (R.A) called Hazrat Hanzla (R.A)’s family members and made four of them witness to the actualisation of her wedding, just to stop story makers from fabrication of any sort. The elders of her family asked her as to why she had adopted this formality, she replied, she saw the sky open to Hanzala and it shut again after he had entered into it. She (R.A) was refering to the Martyrdom of Hanzala by the dream.

Allah (S.W.T) bestowed her with a son, who was named Abdullah. He (R.A) was the one who commanded the army when Madina attack by Yazid bin Mauviyah lanati.

When the battle of Uhud started, Saidina Hanzalah RA had just been married to Jamilah bti Ubay and therefore did not join the battle from the beginning. It is said that he had just left the bed of his wife and had hardly started taking his bath, when he heard somebody breaking the news about the defeat. He delayed the bath and with sword in hand, rushed towards the battle-field. He jumped into the enemy lines, fighting and killing till he was killed. The body of the person killed in the path of Allah is not washed, unless a bath has been compulsory on him before his death. Not knowing his failure to take the compulsory bath, the Sahabah buried him without a bath. Just before his burial, Nabi SAW said: “I see the Malaikah washing Hanzalah’s body.”
Saidina Abu Saeed Sa’adi says: “On hearing this from Nabi SAW(, I went to have a look at Hanzalah’s face and I noticed drops of water trickling down his hair.” When Nabi SAW returned to Madinah, he made enquiries and the facts of Saidina Hanzalah’s delaying his bath came to light. This again shows the courage of those people. A brave person cannot accept any delay and jumps into the jaws of death. Saidina Hanzalah RA also could not wait to finish the bath which was compulsory on him.