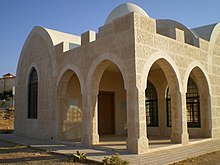 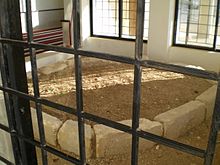 The grave of ‘Hazrat Abdul-Rahman ibn ‘Awf  r.a in Amman, Jordan and The grave from inside.

His name in Jahiliyyah days was Abu Amr. But when he accepted Islam the noble Prophet called him Abdur-Rahman – the servant of the Beneficent God.

Abdur-Rahman became a Muslim before the Prophet entered the house of al-Arqam. In fact it is said that he accepted Islam only two days after Abu Bakr as-Siddiq did so.

Abdur-Rahman did not escape the punishment which the early Muslims suffered at the hands of the Quraysh. He bore this punishment with steadfastness as they did. He remained firm as they did. And when they were compelled to leave Makkah for Abyssinia because of the continuous and unbearable persecution, Abdur-Rahman also went. He returned to Makkah when it was rumored that conditions for the Muslims had improved but, when these rumors proved to be false, he left again for Abyssinia on a second hijrah. From Makkah once again he made the hijrah to Madinah.

Soon after arriving in Madinah, the Prophet in his unique manner began pairing off the Muhajirin and the Ansar. This established a firm bond of brotherhood and was meant to strengthen social cohesion and ease the destitution of the Muhajirin. Abdur-Rahman was linked by the Prophet with Sad ibn ar-Rabi’ah. Sad in the spirit of generosity and magnanimity with which the Ansar greeted the Muhajirin, said to Abdur-Rahman:

“My brother! Among the people of Madinah I have the most wealth. I have two orchards and I have two wives. See which of the two orchards you like and I shall vacate it for you and which of my two wives is pleasing to you and I will divorce her for you.”

Abdur-Rahman must have been embarrassed and said in reply: “May God bless you in your family and your wealth. But just show me where the suq is..”

Abdur-Rahman went to the market-place and began trading with whatever little resources he had. He bought and sold and his profits grew rapidly. Soon he was sufficiently well off and was able to get married. He went to the noble Prophet with the scent of perfume lingering over him.

“I have got married,” replied Abdur-Rahman. “And what did you give your wife as mahr?” “The weight of a nuwat in gold.”

“You must have a walimah (wedding feast) even if it is with a single sheep. And may Allah bless you in your wealth,” said the Prophet with obvious pleasure and encouragement.

Thereafter Abdur-Rahman grew so accustomed to business success that he said if he lifted a stone he expected to find gold or silver under it!

Abdur-Rahman distinguished himself in both the battles of Badr and Uhud. At Uhud he remained firm throughout and suffered more than twenty wounds some of them deep and severe. Even so, his physical jihad was matched by his jihad with his wealth.

Once the Prophet, may God bless him and grant him peace, was preparing to despatch an expeditionary force. He summoned his companions and said:

“Contribute sadaqah for I want to despatch an expedition.” Abdur-Rahman went to his house and quickly returned. “O Messenger of God,” he said, “I have four thousand (dinars). I give two thousand as a qard to my Lord and two thousand I leave for my family.”

When the Prophet decided to send an expedition to distant Tabuk – this was the last ghazwah of his life that he mounted – his need for finance and material was not greater than his need for men for the Byzantine forces were a numerous and well-equipped foe. That year in Madinah was one of drought and hardship. The journey to Tabuk was long, more that a thousand kilometers. Provisions were in short supply. Transport was at a premium so much so that a group of Muslims came to the Prophet pleading to go with him but he had to turn them away because he could find no transport for them.

These men were sad and dejected and came to be known as the Bakka’in or the Weepers and the army itself was called the Army of Hardship (‘Usrah). Thereupon the Prophet called upon his companions to give generously for the war effort in the path of God and assured them they would be rewarded. The Muslims’ response to the Prophet’s call was immediate and generous. In the fore front of those who responded was Abdur-Rahman ibn Awf. He donated two hundred awqiyyah of gold whereupon Umar ibn al-Khattab said to the Prophet:

“I have (now) seen Abdur-Rahman committing a wrong. He has not left anything for his family.”

“Have you left anything for your family, Abdur-Rahman?” asked the Prophet.

“Yes,” replied Abdur-Rahman. “I have left for them more than what I give and better.” “How much?” enquired the Prophet.

“What God and His Messenger have promised of sustenance, goodness and reward,” replied Abdur-Rahman.

The Muslim army eventually left for Tabuk. There Abdur-Rahman was blessed with an honor which was not conferred on anyone till then. The time of Salat came and the Prophet, peace be on him, was not there at the time. The Muslims chose Abdur-Rahman as their imam. The first rakat of the Salat was almost completed when the Prophet, may God bless him and grant him peace, joined the worshippers and performed the Salat behind Abdur-Rahman ibn Awf. Could there be a greater honor conferred on anyone than to have been the imam of the most honored of God’s creation, the imam of the Prophets, the imam of Muhammad, the Messenger of God!

When the Prophet, peace be on him, passed away, Abdur-Rahman took on the responsibility of looking after the needs of his family, the Ummahaat al-Muminin. He would go with them wherever they wanted to and he even performed Hajj with them to ensure that all their needs were met. This is a sign of the trust and confidence which he enjoyed on the part of the Prophet’s family.

“Who has sent this money?” and was told it was Abdur-Rahman, whereupon she said:

“The Messenger of God, may God bless him and grant him peace, said: No one will feel compassion towards you after I die except the sabirin (those who are patient and resolute).”

The prayer of the noble Prophet that Allah should bestow barakah on the wealth of Abdur-Rahman appeared to be with Abdur-Rahman throughout his life. He became the richest man among the companions of the Prophet. His business transactions invariably met with success and his wealth continued to grow. His trading caravans to and from Madinah grew larger and larger bringing to the people of Madinah wheat, flour, butter, cloths, utensils, perfume and whatever else was needed and exporting whatever surplus produce they had.

One day, a loud rumbling sound was heard coming from beyond the boundaries of Madinah normally a calm and peaceful city. The rumbling sound gradually increased in volume. In addition, clouds of dust and sand were stirred up and blown in the wind. The people of Madinah soon realized that a mighty caravan was entering the city. They stood in amazement as seven hundred camels laden with goods moved into the city and crowded the streets. There was much shouting and excitement as people called to one another to come out and witness the sight and see what goods and sustenance the camel caravan had brought.

Aishah, may God be pleased with her, heard the commotion and asked: “What is this that’s happening in Madinah?” and she was told: “It is the caravan of Abdur-Rahman ibn Awf which has come from Syria bearing his merchandise.” “A caravan making all this commotion?” she asked in disbelief.” “Yes, O Umm al-Muminin. There are seven hundred camels.”

Aishah shook her head and gazed in the distance as if she was trying to recall some scene or utterance of the past and then she said:

“I have heard the Messenger of God, may God bless him and grant him peace, say: I have seen Abdur-Rahman ibn Awf entering Paradise creeping.”

Why creeping? Why should he not enter Paradise leaping and at a quick pace with the early companions of the Prophet?

Some friends of his related to Abdur-Rahman the hadith which Aishah had mentioned. He remembered that he had heard the hadith more than once from the Prophet and he hurried to the house of Aishah and said to her: “Yaa Ammah! Have you heard that from the Messenger of God, may God bless him and grant him peace?” “Yes,” she replied.

“You have reminded me of a hadith which I have never forgotten,” he is also reported to have said. He was so over-joyed and added:

“If I could I would certainly like to enter Paradise standing. I swear to you, yaa Ammah, that this entire caravan with all its merchandise, I will giver sabilillah.”

And so he did. In a great festival of charity and righteousness, he distributed all that the massive caravan had brought to the people of Madinah and surrounding areas.

This is just one incident which showed what type of man Abdur-Rahman was. He earned much wealth but he never remained attached to it for its own sake and he did not allow it to corrupt him.

Abdur-Rahman’s generosity did not stop there. He continued giving with both his hands, secretly and openly. Some of the figures mentioned are truly astounding: forty thousand dirhams of silver, forty thousand dinars of gold, two hundred awqiyyah of gold, five hundred horses to mujahidin setting out in the path of God and one thousand five hundred camels to another group of mujahidin, four hundred dinars of gold to the survivors of Badr and a large legacy to the Ummahaat al Muminin and the catalogue goes on. On account of this fabulous generosity, Aishah said:

“May God give him to drink from the water of Salsabil (a spring in Paradise).” All this wealth did not corrupt Abdur-Rahman and did not change him. When he was among his workers and assistants, people could not distinguish him from them. One day food was brought to him with which to end a fast. He looked at the food and said:

“Musab ibn Umayr has been killed. He was better than me. We did not find anything of his to shroud him with except what covered his head but left his legs uncovered. . Then God endowed us with the (bounties of) the world… I really fear that our reward has been bestowed on us early (in this world).” He began to cry and sob and could not eat.

May Abdur-Rahman ibn Awf be granted felicity among “those who spend their substance in the cause of God and follow up not their gifts with reminders of their generosity or with injury. For them their reward is with their Lord, on them shall be no fear nor shall they grieve”. (The Quran, Surah al-Baqarah, 2: 262).