She was the mother of Az-Zubair ibn Al-‘Awwaam and the full sister of Hamza ibn Abdul Muttalib. It was said that she was the Prophet’s only paternal aunt who actually embraced Islam and migrated.

She had a strong personality and was therefore inclined towards sternness and harshness.

Her first marriage was to Al-Harith ibn Umayyah, who was Abu Sufyaan’s brother. He then died before they had had any children together. She was then married to Al-‘Awwam ibn Khuwaylid, who was our Mother Khadeejah’s (may Allah be pleased with her) brother. She gave birth to two of his children: As-Sa’ib and Az-Zubayr. When he passed away, Safiyah devoted all her attention to her two orphaned sons, especially the younger one. Whenever he came home complaining of being bullied by children of his age, she would sternly rebuke him, tie him and beat him up so as to make him strong and firm.

When one of the members of her husband’s family once passed by her while she was treating her son in this way, he requested her to be kind to the poor orphan. She replied that she wants to make a man out of her son; a man that would be undefeatable and insuppressible, a man that would never surrender to any of Allah’s creatures.

It was reported that Az-Zubayr engaged in a duel with someone who slandered him and Az-Zubayr was so strong, that he broke the hand of the slanderer and severely beat him up. This man, with his pains was brought to Safiyah and she asked him what had happened to him, to which was told,

“He fought with Az-Zubayr and he [Az-Zubayr] did to him that which you can see.”

When she heard thise, she proudly recited the following poetical verses :

How did you find Zubayr?

Did you find him a cottage cheese or a date fruit?

Or did you find him a raving falcon?

He is not as simple to overcome or an easy food that be eaten effortlessly!

Safiyah achieved what she wanted; Az-Zubayr grew strong in body and soul, with no lassitude or sluggishness.

Az-Zubayr had accepted Islaam before her; Safiyah would argue with him staunchly over his reversion. Yet, Az-Zubayr had passed the stage of childhood to manhood by then and became independent in his personality and opinion. She thus had no control over him, although he was dutiful and compassionate with her. Safiyah did not embrace Islam until the day her brother accepted Islaam. Hence, she accepted Islaam later on, after her sons had already accepted Islaam.

Safiyah had many commendable and praiseworthy roles, which are mentioned within the Seerah of the Messenger of Allah (may the Peace and Blessings of Allah be upon him). One of these is the role she took during the Battle of the Trench (otherwise known as the Battle of the Confederates).

During the Battle of the Trench

The Messenger of Allah (may the Peace and Blessings of Allah be upon him) put women and children in fortresses for protection against the confederates and the Jews of Banu Qurayzah. Safiyah was in a fortress, known as Fari’ under the supervision of Hassan ibn Thabit. Hassan was assigned to look after the women and he did not go out to fight.

“When the Messenger of Allah (may the Peace and Blessings of Allah be upon him) went out to the Battle of the Trench, he put the women of his household in a fortress called Fari’ and assigned Hassan ibn Thabit to look after us. A Jewish man then came and climbed the fortress until he was able to see us. I asked Hassan to rise up and kill him but he said that if he could do so, he would have been with the Prophet (peace be upon him) and would not have been assigned to look after the women. I then rose up and killed him and cut his head off. I then asked Hassan to drag the head of the invader to the Jews who were at the bottom side of the fortress. He swore by Allah that he would not do so. So I took the head and threw it at them. The Jews then said, ‘We know that this man [meaning the Prophet (peace be upon him)] would not leave behind his family without someone to look after them.’ So they dispersed….”

“She was the first Muslim woman to kill a polytheist.”

Dear reader, this incident clearly shows Safiyah’s (may Allah be pleased with her) strong character and personality, her strong faith and her defense of her and the Muslim Womens’ self-dignity. 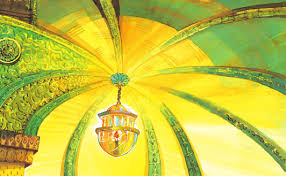 The Battle of Uhud

On the day of Uhud, she had more than one remarkable input. When people felt defeated she moved forward, and when people retreated she advanced!

Hammad narrated on the authority of Hisham that ‘Urwah said:

“Safiyah came on the day of (the battle of) Uhud while the Muslims were vanquished holding a spear in her hand and striking the faces of the polytheists with it. When the Messenger of Allah [sallallahu a’lyhi wa sallam] saw her, he called her son to take hold of her lest she be harmed, for she was his [i.e. the Prophet’s] aunt.”

When Safiyah heard of the martyrdom of her brother Hamzah, whom she dearly loved, she advanced to look at him and see how he was mutilated with a pierced-open belly, a cut-off nose and severed ears… Zubayr stood in her way out of concern for her and told her, “My mother, Allah’s Messenger is ordering you to go back!” It is here that Safiyah is distinguished from other women and it is here that the personality of this strong, believing and persevering woman is vividly manifested. She told her son Zubayr,

“Why should I go back since I have heard that my brother was mutilated in the cause of Allah? We are not pleased with what has happened but I will bear it with patience and I hope to get the reward from Allah, if He so Wills.”

Az-Zubayr came back to the Messenger of Allah (sallallahu ‘alyhi wa sallam) and informed him of what she had said. The Prophet (peace be upon him) then said, “Let her go [to see her brother].” She then went to Hamzah (may Allah be pleased with him) and stood beside his corpse. She shed tears, sought Allah’s forgiveness and said:

“Inna lillahi wa inna ilahi raaji’oon [Certainly we belong to Allah and to Him we are to return].”

For, she was a believing slave of Allah who knew:

{And certainly We shall test you with something of fear, hunger, loss of wealth, lives and fruits, but give glad tiding to as-Sabiroon [the patient]. Who when afflicted by calamity, say, ‘Truly! To Allah we belong and truly, to Him we shall return.’ They are those on whom are the salawaat [i.e. who are blessed and will be forgiven] from their Lord, and [they are those who] receive His mercy, and it is they who are the guided ones.} (Qur’an 2: 155-157)

The Prophet’s (peace be upon him) Wisal

Due to her strong faith, she did not utter a single word of eulogy for the death of any of her dear ones except when the Prophet (sallallahu ‘alyhi wa sallam) died. At-Tabarani reported that when the Messenger of Allah (peace be upon him) died, Safiyah came out waving her garment saying:

Many occurrences have taken place after you,
If you were alive and had been witness to them, calamities would not have reached to such a proportion.

Ibn Ishaaq has also reported some verses of poetry with which Safiyah had eulogized the Prophet (peace be upon him). A part of which goes as follows:

The day we miss the Messenger of Allah (peace be upon him) is here!
O eyes, shed abundant and plentiful tears!

She was also reported to have said:

The day of your death is certainly a day,
In which the sun is wrapped up in darkness though it is shining!

None of the historians dispute over the attribution of these poetic verses to Safiyah. This is because Safiyah lived till the time of the caliphate of ‘Umar.

It was in the caliphate of ‘Umar (may Allah be pleased with him) that she passed away.

May Allah be pleased with her, radhi Allaahu ‘anha.

Safiyyah (Radhiallaho anha) was the aunt of the Prophet (Sallallaho alaihe wasallam) and a real sister of Hamzah (Radhiallaho anho). She took part in the battle of Uhud. When the Muslims were defeated and some of them began to flee from the battle, she would smite their faces with her spear and excite them to go back and fight.

In the war of the ‘Khandaq’ (Trench), Rasulullah (Sallallaho alaihe wasallam) had collected all the Muslim women in a fortress and had deputed Hassaan-bin-Thabit (Radhiallao anho) to look after them. The Jews, who were always on the look-out for such opportunities, for doing mischief, surrounded the place and sent one of them to find out if there were any men with the ladies. Safiyyah (Radhiallaho anha) happened to see the Jew approaching the fort. She said to Hassaan:

“There is a Jew coming to spy on us. You go out and kill him.”

Hassaan (Radhiallaho anho) was a weak person. He did not make bold to do the job. Safiyyah (Radhiallaho anha)got hold of a tent peg and went outside the fortress and gave a blow on the head of the Jew that killed him on the spot. She came back and said to Hassaan:

“The man is dead. I have not removed the clothes and arms from his body for reasons of modesty. Now you go and remove everything from his body. Also bring his head after severing it from the body.”

Hassaan (Radhiallaho anho) was too weak-hearted to do that even. She herself went again and brought his head, and threw it over the wall amidst the Jews. When they saw this, they said:

“We were wondering how Muhammad could keep the womenfolk alone in this fort. Surely, there are men inside to guard the ladies.”

Safiyyah died in 20 A.H. at the age of seventy three. The war of the Trench was fought in 5 A.H. She was, therefore, 58 then. These days, a lady of that age is hardly able to do her domestic work. But look how Safiyyah (Radhiallaho anha) goes and kills a Jew all alone.