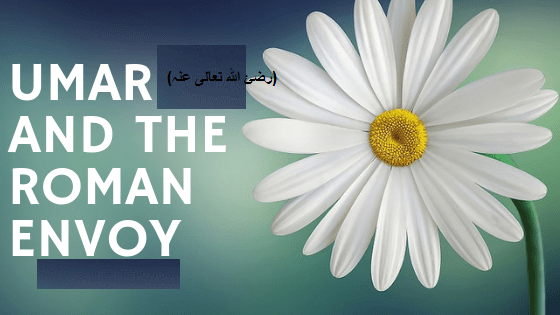 Let us read the Story-

Once the ambasador of the Emperor of Rome came to Madina with many gifts. Arriving at Madina, he enquired from the people the whereabouts of the palace of the King of Madina. The people replied: “Our King has no palace. However, our leader, the leader of the believers has a mansion – his respected self which has a special contact with Allah and which has become enlightened through the splendour of His nearness. Thus this has made him independent of the need for royal palaces. ”

They further informed him: “You will find the leader of the believers, Hazrat Umar in the graveyard of Madina”. The Roman Ambassador then went to the graveyard and there saw Hazrat Umar lying down, having taken off his shirt with a sheet covering the lower part of his body. He was lying down fast asleep on the ground with no throne or crown on his head. Neither were there any soldiers nor any bodyguards. But as the ambassador looked at his face, he began shaking with fear. Within himself he said:

“I have seen many great Kings in this life
And have been the companion and confidant of many Rulers. Never have I any fear for any King.
But the awe and fear I feel for this one
Dressed in such tattered clothing is causing my senses to depart.
This person without any weapons and without any forces sleeping   here alone on this ground.
What is it that causes my whole body to shake and tremble in awe of him?
Even if I had seven bodies, they would not bear it and all would tremble. ”
Then the envoy said to himself:
“This awe and fear that I feel is not for this one who is dressed in    tattered clothes.
In fact, this is fear of Allah for this tattered clothed one has a heart that is blessed with Allah’s contact and nearness.”

Thus this envoy, through the blessings of Hazrat Umar’ s  company and grace converted to Islam.

Maulana Rumi (RA.) says:
“He who fears Allah and adopts a life of righteousness, him the jinn and men fear and whoever sees him is overpowered by awe and fear. ”

Lessons from this Story

This story teaches us the lesson that true honour for men is brought about by true and deep contact with Allah and not by outward shows of beauty and adornment. But the foolish ones of our age are displeasing Allah and in spite of committing sins are endeavouring to acquire honour and respect by building beautiful mansions, dressing in expensive clothing and putting their trust in their businesses. But we see that the honour they acquire is such that in their absence, those very same people who honour them in their presence swear them.

Today, he may be the President of the country, but the moment he vacates that position or is removed from this position, then there is no more any honour for him in the newspapers. Similarly is the position of the Kings. But Saints of Allah, the Awliyaa ­Allah, are the true Kings. Hence they are called Shah. This is their true position and description in this world as well as after their demise. They continue to be mentioned with honour even after their death.

This article describes some of the numerous Muslim contributions to the development of Spanish agriculture, including the introduction of new crops, more intensive use of irrigation, soil management, and scholarly efforts in farming innovation. Such was the impact of farming in Muslim civilisation that the effects are still prevalent to this day. ‘Acequia Mayor’ A […]

Commentary on al-Fátiha, the ‘Opening of the Book’