Skip to content
July 20, 2019 aal-e-qutub
Imam Hasan ( (عليه السلام)) faced extremely difficult conditions from the start. He observed that fear, anxiety and much distress were ever present in Kufa, Basrah, Medina and other towns. The anxiety, uncertainty and insecurity were caused by Mu’awiya’s ill dealing of sincere Muslims. Mu’awiya had spread secret agents all over to defame Ahlul Bayt. 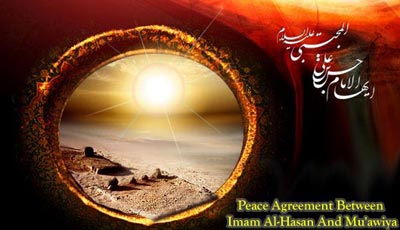 Imam Hasan (عليه السلام) knew that his father Imam Ali  (عليه السلام)had stood like a lion in all difficulties and fought battles against Mu’awiya, but these confrontations had resulted in heavy casualties on both sides. A mass scale family devastation was visible everywhere. Considering all circumstances, Imam Hasan  (عليه السلام) discussed the matter with his brother Husain  (عليه السلام) and other relatives.
He revealed to them that in order to end the bloodshed and to provide a reasonable safety and security to the Ummah, he would make a peace agreement with Mu’awiya and abdicate until after Mu’awiya’s death. After a few days of careful consideration, Imam Hasan  (عليه السلام) accepted an agreement as per the terms dictated by the Imam and agreed to by Mu’awiya.
Four noteworthy terms of this agreement were:

•People of Syria, Iraq, Hijaz, Yemen and other places shall enjoy amnesty against persecution,

•Friends and companions of Imam Ali (AS) and all their women and children shall be protected from all dangers,

•Mu’awiya shall not appoint anyone as his successor.

Once the treaty was signed, Imam Hasan(عليه السلام) and brother Husain (عليه السلام) moved out of Kufa and settled in Medina. Over there both Imams lost no time in holding nightly meetings for Islamic discussions. The nightly meetings proved very successful and gained tremendous popularity.

More people started to attend, to hear the Imams give of their fountain of knowledge on Islam and humanity. The reputation of these meetings began to fly to far away places. People from as far away as Egypt, Iraq, Yemen, and other distant areas traveled to Medina to learn about the Islamic values. As years passed, the knowledge thus given started to bear fruits. The number of Islamic scholars multiplied and increased considerably.

In the meantime Mu’awiya, unabashedly elected to disregard the terms of his treaty with Imam Al-Hasan(عليه السلام)

a) He sent secret agents to terrorize, kidnap, or even kill innocent people specially those who were loyal to Ahlul Bayt (AS).

d) Mu’awiya gathered a very large number of collaborators who unabashedly would do any thing for money.