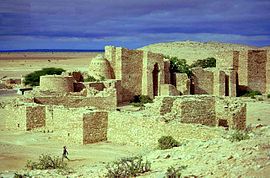 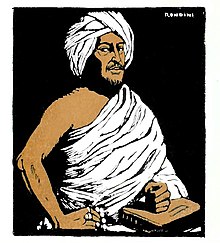 Due to his successful completion of the hajj to Mecca, his complete memorization of the Quran and his purported descent from the Prophet Muhammad, his name is sometimes preluded with honorifics such as Hajji, Hafiz or Sayyid.[3][4] Muhammad `Abd Allāh al-Hasan (Somali: Sayid Maxamed Cabdille Xasan, Arabic: محمّد عبد اللّه حسن‎; Sayyid Muḥammad ibn ‘Abdallāh was referred to as the Mad Mullah by the British empire. His name is sometimes informally abbreviated as MAH. Due to his influence in the precipitation of Somali nationalism, he is referred to as the Father of Somali nationalism.[5] In 1917, the Ottoman Empire referred to Hassan as the “Emir of the Somali”.[6]

Hassan thus grew up among the Dhulbahante pastoralists, who were good herdsmen and warriors and who tended and used camels as well as horses. Young Hassan’s hero was his maternal grandfather, Sade Mogan, who was a great warrior chief. In addition to being a good horseman, by the age of eleven, Hassan had learned the entire Qur’an by heart (he was a hafiz), and displayed all the qualities of a promising leader. He continued his religious education. In 1875, Hassan’s grandfather died, which came as a shock. That same year, he worked as a Qur’anic teacher for two years. His thirst for Islamic learning was so intense that he left his job and devoted about ten years to visiting many famous centres of Islamic learning including Harar and Mogadishu and even some centres in Sudan.

Hassan received education from as many as seventy-two Somali and Arab religious teachers. In 1891, upon returning home, he married an Ogadeni woman. Three years later, along with two uncles and eleven other companions some of whom were his maternal kin, Hassan went to Mecca to perform the Hajj. The party stayed there for a year and a half and came under the charismatic influence of the newly-developing Saalihiya order under the leadership of the great Sudanese mystic, Mohammed Salih. Hassan received initiation and very rigorous spiritual training under Salih. From this experience, Hassan emerged a changed man — spiritually transformed, ‘shaken and over-awed’, but determined to spread the teachings of the Saalihiya order in Somalia.

In 1895, Hassan returned to Berbera. The British considered Berbera merely ‘Aden’s butcher’s shop’, since they were only interested in getting regular supplies of meat from Somalia through this port for their British India outpost of Aden.

Taking advantage of Britain’s complacency, Emperor Menelek II of Ethiopia asked Ras Makonnen, the Governor of his newly conquered Hararghe Province, to send armed bands to plunder and occupy Ogaden politically. The British withdrew from this area of their territory in Somalia.

In Berbera, Hassan could not succeed in spreading the teaching of the Saalihiya order due to the hostility of the local Qadiriyyah inhabitants. They did not like him criticising their eating khat, gorging on the fat of sheep’s tail and following their traditional Qadiriyyah order. In 1897, he left Berbera to be with his Dulbahante kinsmen. On the way, at a place called Daymoole, he met some Somalis who were being looked after by a Catholic Mission. When he asked them about their clan and parents, the Somali orphans replied that they belonged to the “clan of the (Catholic) Fathers.” This reply shook him, for he felt that the “Christian Overlordship in his country was tantamount to the destruction of his people’s faith.”

In 1899, some soldiers of the British armed forces met Hassan and sold him an official gun. When questioned about the loss of the gun, they told their superiors that Hassan had stolen the gun from them. On 29 March 1899, the British Vice Consulwrote a very stern and insulting letter to him accusing his camp of stealing the gun and asking him to return it immediately. This enraged Hassan and he sent a very brief and curt reply dismissing the allegation. Hassan’s attention had been focused on the Ethiopian invaders of Somalia, but this incident brought him into conflict with the British as well. The British, Ethiopian Emperor Menelek II, and a small numbers of Somalis then joined together to crush Hassan’s Dervish movement.

In several of his poems and speeches, Hassan said that the British “have destroyed our religion and made our children their children” and that the Christian Ethiopians in league with the British were bent upon plundering the political and religious freedom of the Somali nation. He soon emerged as “a champion of his country’s political and religious freedom, defending it against all Christian invaders” to his supporters. He issued a religious ordinance that any Somali who did not accept his goal and would not join his Salihiyya brotherhood would be considered as non-Muslims (gaalo).[1] He acquired weapons from the Ottoman Empire, Sudan, and other Islamic countries. He appointed his ministers and advisers in charge of different areas or sectors of Somalia and called for Somali unity and independence.

At this time Hassan organized his warriors. His Dervish movement had an essentially military character, and the Dervish Statewas fashioned on the model of a Salihiyya brotherhood. It had a rigid hierarchy and robust centralization.

Hassan threatened to drive the Christians into the sea, and he committed the first attack by launching a major military offensive with his 1,500 Dervishes, equipped with 20 modern rifles, on the British soldiers stationed in the region.

Hassan sent one of his men to Yemen in disguise for reconnaissance activities to report on the new aeroplanes’ preparedness for attack. He sent his emissaries all over the country appealing for Somali people to join his movement and many responded to him enthusiastically.

In 1900, an Ethiopian expedition sent to arrest or kill Hassan looted a large number of camels of the Mohammed Subeer Ogaden sub-clan. In answer to his appeal, Hassan attacked the Ethiopian garrison at Jijiga on 4 March of that year and successfully recovered all the looted animals. This success emboldened Hassan and enhanced his reputation.

In June, three months later, Hassan raided the British-protected northern Somali clans of Eidagale and Isaaq and confiscated about 2,000 camels. He gained great prestige in recovering the looted stock from the Ethiopians and he used it along with his charisma and powers of oratory to improve his undisputed authority among the Ogaden. To harness Ogaden enthusiasm into final commitment, Hassan married the daughter of a prominent Ogaden chieftain and in return gave his own sister, Toohyar Sheikh Adbile, to Abdi Mohammed Waale, a notable Mohammed Subeer elder.

However, soon angered by his autocratic rule, Hussen Hirsi Dala Iljech’ – a Mohammed Subeer chieftain – plotted to kill him. The news of the plot leaked to Hassan. He escaped but his prime minister and maternal uncle, Aw ‘Abbas, was killed. Some weeks later, Mohammed Subeer sent a peace delegation of 32 men to Hassan, but he had all the members of the delegation arrested and killed. Shocked by this, Mohammed Subeer sought the help of the Ethiopians and the Dervish withdrew to Nugaal.

Hassan (by now better known by his honorific title of “Sayyid”) patched up with the Dulbahante temporarily by paying huge blood monies. This frightened the British-protected North Somali pastoralists. Towards the end of 1900, Ethiopian Emperor Menelik proposed a joint action with the British against the Dervish. Accordingly, British Lt. Col. Eric John Eagles Swayneassembled a force of 1,500 Somali soldiers led by 21 European officers and started from Burco on 22 May 1901, while an Ethiopian army of 15,000 soldiers started from Harar to join the British forces intent on crushing the 20,000 Dervish fighters (of whom 40 percent were cavalry).

During 1901 and 1904, the Dervish army inflicted heavy losses on their enemies – the Ethiopians, the British, and the Italian forces. “His successes attracted to his banner even Somalis who did not follow his religious beliefs.” On 9 January 1904, at the Jidaale (Jidballi) plain, the British Commander, General Charles Egerton, killed 1,000 Dervish.[2] This defeat forced Sayyid and his remaining men to flee to Majeerteen country.

Around 1910, in a secret meeting under a big tree later nicknamed “Anjeel tale waa” (“The Tree of Bad Counsel”), about 600 Dervish followers decided to stop following Sayyid due to his perceived high-handedness. Their departure weakened, demoralized and angered Sayyid, and it was at this juncture that he composed his most famous poem entitled The Tree of Bad Counsel.

Push to the south

Sayyid Mohamed Abdulle Hassan’s own Ogaden clansmen weren’t entirely on his side when the Marehan saw the importance of siding with the nationalist leader in ridding themselves of the colonial powers. From Serinley to Dolow, the second arm of the Marehan wasn’t happy with giving the British a second front for confrontation. The peaceful communities between Bardera and Dolow to the Tana River in East Africa were long established before the late 19th century uprising of Sayyid Mohamed Abdulle Hassan.

During 1910-1914, Sayyid’s capital moved from Illig to Taleh in the heart of Nugal where he built three garrison forts of massive stone work and a number of houses. By 1913, he had dominated the entire hinterland of the Somali peninsula by building forts at Jildali and Mirashi in Warsangali country, at Werder and Korahe in the Ogaden and Beledweyne in southern Somalia. On 9 August 1913, at the Battle of Dul Madoba, a Dervish force raided the Habar Yoonis clan near Burco and killed or wounded 57 members of the 110-man Somaliland Camel Constabulary. The dead included the British officer who commanded the constabulary, ColonelRichard Corfield. Hassan memorialized this action in his poem simply entitled “The Death of Richard Corfield.” In the same year, the Dervish sacked Berbera. In 1914, the Somaliland Camel Corps was founded as an expanded and improved version of the constabulary.

A British force was gathering against the Dervishes when they were interrupted by the outbreak of World War I. Among the British officers deployed was Adrian Carton de Wiart (later Lieutenant General), who lost an eye during the campaign, and Hastings Ismay, a staff officer who was later Winston Churchill’s chief military advisor.

By 1919, despite the British having built large stone forts to guard the passes to the hills, Hassan and his armed bands were at large, robbing and killing.[3] The vision of Sayyid and his followers in Jubba was similar to that of people in Sudan and Egypt when the Ottoman Sultanate was retreating from those other Northeast African territories.

In the beginning of 1920, the British struck the Dervish settlements with a well-coordinated air and land attack and inflicted a stunning defeat. The forts of Hassan were damaged and his army suffered great losses. They hastily fled to Ogaden. Here, again with the help of his patriotic poetry and charisma, he tried to rebuild his army and accomplish the coalition of Ogaden clans, which made him a power in the land once again.

On 21 December 1920, Hassan died of influenza at the age of 64, his grave is believed to be somewhere close to Imi town of the Somali region of Ethiopia; however, the exact spot of the Sayid’s grave is unknown